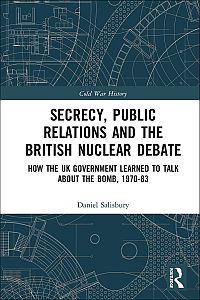 Daniel Salisbury's book, based on his PhD thesis at King's College London, tackles one of the key issues of modern statehood and democracy: the question of how governments have decided to keep some forms of knowledge from the public domain, and therefore from the scrutiny of public debate. Neither is full secrecy possible - if no one knew about a secret, the term would not make much sense - nor is it possible for anyone to know everything. In government, what people know and what they do not know is part of a political decision, and that makes it an important topic for historical investigation.

For medieval and early modern historians, questions about statehood and secrecy are perhaps not that surprising. Yet especially contemporary historians have only recently begun to tackle the subject. They have done so especially in the context of the history of science and technology. Here the question has been how states have sought to remove scientific knowledge that has been deemed dangerous from the public gaze. Alex Wellerstein's wide-ranging study on secrecy and nuclear weapons in the context of the Cold War United States has focused on the interactions between science, scientists and successive US administrations. Wellerstein has argued that the secrecy around nuclear weapons was the driving force and template for secrecy in the US national security state.

The focus and scope of Salisbury's book on the UK is at once more specific and chronologically more limited. His analysis mostly bypasses questions of weapons design and technology. He has instead decided to zoom in on questions of nuclear strategy, civil defence and weapons procurement from the 1970s into the 1980s. This more specific focus does not mean that Salisbury's findings are not interesting and significant. Peter Hennessy has called the core governmental fabric of the British polity "the secret state", and yet we still lack a more systematic political history of how 'secrecy' was defined differently at different times.

The question of secrecy has a particular relevance for nuclear weapons: their lethality seems to make it especially important to keep their precise workings restricted to a small number of officials to prevent nuclear proliferation - and has done so especially in the UK, which early on in the Cold War was affected by a significant degree of Soviet nuclear espionage. But there is a second reason why one might argue that secrecy matters for nuclear weapons technology and policy in particular: it might be strategically prudent to keep the precise working of technology and capabilities - in fact the whole strategy - secret from one's opponents and therefore one's posture ambiguous to maximise the deterrent power of nuclear weapons.

Salisbury's study shows how, at the beginning of his period of investigation and into the late 1970s, there was hardly any public debate about nuclear policy and strategy to speak of - only an extremely limited number of policy makers, engineers and scientists had knowledge of key development in nuclear weapons procurement and strategy. The scoops by the journalist Chapman Pincher, based on interviews with Whitehall mandarins, were initially the main form of public debate. By the end of the 1980s, by contrast, debates about nuclear policy and strategy were, if not directly encouraged, an important component of the government's work in British defence policy. This time period saw discussions about the replacement of the Polaris missile system with a different system - and it also witnessed some of the most significant debates about British defence policy in recent history: the debates about how the UK should implement NATO's dual track decision, which was itself a reaction to the build-up of new intermediate range missiles by the Soviet Union.

Salisbury identifies three key factors that enabled this change: first, intra-party politics. The Labour governments under Prime Ministers Harold Wilson and James Callaghan in the 1970s were extremely concerned about any public discussions of nuclear weapons and nuclear strategy - they feared that an open debate would lead to an agonising conflict within their party. The Conservative Party under Margaret Thatcher could be much bolder in this respect. Second, the 1970s had hardly seen much public debate about nuclear weapons and strategy: the decade started with détente between the superpowers as well as in Europe, and the Campaign for Nuclear Disarmament which had been founded in the late 1950s, was more or less in abeyance. Third, faced with the mobilisation of critical public opinion during the revival of the Campaign for Nuclear Disarmament in the early 1980s, especially in the context of the futility or otherwise of civil defence and in the context of debates about the role of nuclear weapons more generally, the government changed its approach.

This transformation started under secretary of defence Francis Pym, who argued for a more 'persuasive' approach. From 1981, under Pym's successor John Nott from January 1981 and against the backdrop of a more confident peace movement, this effort at persuasion became more aggressive. Under Michael Heseltine, this approached turned to "showmanship" to ensure media coverage. (170) Heseltine not only tried to make the messaging more effective, he also created a new organisational structure in the Ministry of Defence to achieve this: a Ministerial Committee attended by junior ministers was to ensure the coherence of government messaging. This committee was supported by a cross-ministerial group of officials. Defence Secretariat 19 (DS19) was to "develop the arguments." (179) But they also relied on a new generation of civil servants in the Ministry of Defence (like Michael Quinlan, who was nonetheless probably uniquely brilliant in his grasp of detail and analytical sophistication), who were able to engage in public debate more offensively and saw public relations as a key function of the government's role.

The Thatcher government's shift towards a more offensive and persuasive mode of public relations around its nuclear policy therefore shows that Salisbury's findings have wider implications for our understanding of civil-military relations more generally. There was a firm belief in the British government that citizens were rational and could be persuaded through debates and discussions. This finding invites more comparative analysis.

The study's particular strength lies in the analysis of governmental debates in the broader context of the emerging field of strategic studies in the UK. Salisbury shows in particular how academic interest in questions of nuclear policy and strategy gradually led to more openness. The Institute of Strategic Studies (ISS, later International Institute of Strategic Studies (IISS) from 1964) in London played an important role here. Discussions to establish such an institute themselves began in the context of debates about British nuclear policy and strategy in the late 1950s. They germinated in the context of Chatham House, the Royal Institute for International Affairs (RIIA), and took concrete shape at a conference in Brighton in 1957 which led to the establishment of the ISS in 1958. By focusing on discussions around the IISS in the 1970s in particular, Salisbury is able to demonstrate that the impact of academics and former civil servants working at the RIIA and the IISS, such as Ian Smart and Lawrence Freedman, were key in opening up the nuclear debate in Britain. By scouring through the few public documents they were able to find and through "walks with friendly officials around St James's Park," (vii) as Freedman puts it in his foreword, they were able to foster public analysis.

In spite of the detail provided, one would occasionally have wanted more context. For example, one might have wished to read a bit more about how discussions in NATO filtered through to the UK context, although it might well be the case that there is simply not sufficient archival material to allow for such an analysis. Moreover, the analysis of party-political pressures on governmental actors is not consistently discussed in such depth, and this reader found himself wanting more - the analytical focus mostly within the binary categories of the time between "orthodoxy" and "disarmers." (6)

It is perhaps less well known that the more mainstream strand of peace history in Britain, represented for example by Martin Ceadel, also experienced a revival during the debates about NATO's dual track decision from the early 1980s onwards. It is therefore not surprising that Salisbury does not use it conceptually. Nonetheless, Ceadel's important work "Thinking about Peace and War" [1] was written in the context of the debates about nuclear weapons in the 1980s - and the idea encouraged by the doyen of British war studies, Michael Howard. Interestingly, the British government's emphasis on the "'middle ground' of public opinion" (199) in the 1980s relates directly to Ceadel's category of defencists: those who were not necessarily keen to wage war, but who saw the need for weapons - including nuclear weapons - to enable for a country's defence. The idea of a middle ground in public opinion about defence might probably deserve an own study, not least because it was an important part of Cold War liberalism.

Overall, Salisbury's book is a detailed and well-argued account that is based on an excellent command of relevant governmental sources, some of them recently declassified. Salisbury has also been able to interview former governmental actors to gain some additional information. The study will be read with considerable benefit not only by historians of British nuclear policy, but also by those interested in British government more generally. It is also one of the first works to show from the governmental record how peace movements influence governmental policy - and how they do not.