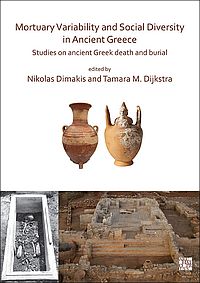 This book is based on contributions to an International Workshop for young scholars held in Athens in 2016. The workshop represented the first activity of the 'The Necropoleis Research Network'. This network was founded in January 2016 by Greek, Turkish and Dutch scholars, who are interested in the study of ancient necropoleis, with the main purpose of meeting and exchanging research results, views, and experiences. [1] The volume gives the opportunity for some young scholars to publish the preliminary results of their ongoing doctoral research or the key results of their recently completed PhD theses. This provides a convenient insight into the research of scholars, who are not native English speakers, and most of whom have written their theses in a foreign language.

The volume focuses on Greece with a broad range of interests and chronological era: from the Iron Age to the Late Roman period. The volume begins with a very short introduction by Nicolas Dimakis and Tamara M. Dijkstra that does not provide a lot of room to contextualise the discussion in the current scholarship. The major themes of the workshop are also very briefly presented: the treatment of death depending on the social structure and roles in its local context, and the influence of historical developments on death practices. The book is divided into three thematically organised sections: Death Practices and Social Change, Social Identity and Treatment in Death, and Monumental Commemoration and Identity.

In the first section, three papers are dedicated to funerary evidence from Attica. The paper by Alexandra Alexandridou is an extensive overview of the cremation burial rite in Attica during the Late Geometric Period focusing on the horizontal dimension of mortuary practices and reveals the importance of the age factor for the choice of the funerary treatment. The pre-Classical period is also the time frame chosen by Vicky Vlachou to illustrate the funerary practices on the plain of Marathon, in north-eastern Attica. The use of the past by means of the deposition of drinking vessels in later burial contexts as well as the reuse of earlier Bronze Age areas by local oikoi, serve to exhibit how property and lineage led to the foundation of the Marathonian Tetrapolis. South-eastern Attica is the spatial frame of the study by Panagiota Galiatsou. Five rural cemeteries of the classical age are presented. In contrast to the urban cemeteries, a minimal mortuary variation was found. Two papers examine human remains. The paper by Eleni Panagiotopoulou investigates the mortuary communities in Thessaly during the Protogeometric Period and demonstrates the presence of diversity in burial practices but limited variation in dietary practices, and the occurrence of population movements within the region as well as outside Thessaly. The paper by Anna Moles examines skeletal assemblages from rescue excavations in Knossos and reveals the demographic and economic developments of the city from the Hellenistic period until its decline during the Late Antique period.

In the second section, two papers are dedicated to child death. Olga Kaklamani focuses on enchytrismoi in the city of Thera during the 8th to the 6th centuries B.C. Children were integrated into the adult cemeteries and received the same funeral rites. This inclusion demonstrates the cohesion of the kinship groups and reflects the will of the members of the newly founded colony of Thera to assert and maintain their position in the new land. Classical and Hellenistic child burials in Attica are analysed from a different and innovative perspective by Nikolas Dimakis who concentrates on emotion, and the child´s identity and status. Finally, Georgia Ivou presents two tomb assemblages from Late Classical Argos, and highlights two different social groups: that of the prematurely lost άωρος κόρη and that of the revered elder. Unfortunately, her conclusions are not yet confirmed by anthropological studies.

In the last section, two contributions deal with the Peloponnese during the Roman period. Georgios Doulfis concentrates on the use of columbaria. The interesting fact is that they are concentrated in Laconia and are situated in sites with commercial and imperial interests. Mortuary practice and identity in Laconia is also the subject of the paper by Maria Tsouli which concerns burial monuments, within the periphery of Sparta, with exceptional marble sarcophagi of Attic provenance or Attic style. Noteworthy is the strategic location of such monuments which dominate the landscape. The use of the landscape also plays an important role in the paper of Vasiliki Brouma who investigates the monumental tomb at Agios Milianos in Lindos. The author proposes an alternative function of the tomb as a cenotaph. Finally, two papers deal with the island of Kos. Nikolas Dimakis and Vassiliki Christopoulou focus on a peculiar Roman monument with multiple burials and conclude that it was used by a local cultic community (Θίασος) of both men and women who shared common values and attitudes toward death. Chrysanthi Tsouli provides an analytical presentation of a group of Koan grave markers, from the third century BCE to the third century CE, which explores the transformations in iconography.

These individual studies could have cumulated in a joint conclusion: something that was also not adequately supplied by the brief preface. Cross-references are also missing, and it is mostly left up to the reader to draw connections between the papers. The essays differ greatly in length, outlook and scope, but as a whole, the volume provides an engaging study of much of the recent work done on the subject of Greek death und burial, and a contextual analysis of different aspects of mortuary practices. Without doubt, its interdisciplinary approach marks one of the most valuable aspects of the publication, which constitutes a necessary update for many topics in the field and is especially useful for a specialist audience.