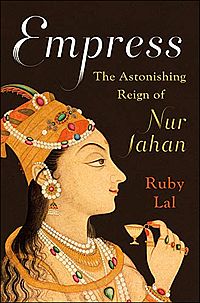 Scholarship on royal women in Mughal India is scarce but growing, and the leading expert on this subject is no doubt Dr. Ruby Lal, Associate Professor of South Asian History at Emory University, Atlanta. Her recent book, Empress: The Astonishing Reign of Nur Jahan (2018), brings back into the limelight the most famous of Mughal women, Nur Jahan (1577-1645). Anyone interested in South Asian history or the larger Persianate world, and cognizant of the crucial need to visibilize the histories of powerful women, will certainly find this an engaging and inspiring read. Spread over sixteen chapters, Lal's biography problematizes Nur Jahan's legendary status in present-day South Asia, the many myths about her rise to prominence, and her supposed emasculation of the fourth Mughal emperor Jahangir (r. 1605-1627). The pivotal contribution of this work is its argument that Nur Jahan was not merely his twentieth wife; from 1614 to 1627, she was also his co-sovereign in governing the vast Mughal Empire. Lal's central questions motivating this study of Nur Jahan's life are, however, somewhat presentist: "How did she do it? How did it happen back then, and in India?" (11). They assume an entrenched patriarchal system that allowed very little space for women in power, and retrospectively impose a postmodern lens on a premodern historical figure.

Mihr-un-nisa or Mihr (Nur Jahan's maiden name) was born in 1577 in a caravan outside Qandahar as her parents, Asmat Begum and Ghiyas Beg, were migrating from Herat to Lahore in order to escape the repressive conditions in Safavid Iran under Shah Isma'il II. In these introductory chapters that lay out Mihr's parents' journey to India, Lal's ability to assemble a coherent narrative from relatively sparse historical details is praiseworthy. But some of her observations read as speculation or even embellishment. For instance, there are no citations given for this rather romanticized description of the streets of Mughal Lahore: "One section of the bazaar, a series of intricate lanes, was set aside for women only. Women took their time gazing at the bold patterns and colorful embroidery on the finest muslins, silks, and velvets. Many wore flowers in their hair, and toe rings and anklets with charms or little bells, and chewed betel leaf to redden their lips. Married women wore maang, red color in the parting of their hair; or the sekra, seven or more strings of pearls that hung from a band at the forehead; or the laung, a clove-shaped stud ornamenting the nose." (30)

Following a brief stay in Lahore, Mihr's family set out for Fatehpur Sikri, the new Mughal capital created by emperor Akbar, where Ghiyas Beg gained employment as an official rank-holder (mansabdar). In the Mughal harem, Mihr and her mother encountered an atmosphere of strong female homosociality. Akbar's aunt, Gulbadan Begum, went on pilgrimage (hajj) in 1582 with a retinue of women to Mecca, thus defying his attempts to segregate and seclude the veiled ones (parda-giyan). Mihr's childhood was shaped by the multicultural environment of Agra, immersion in the Persian literary tradition that inspired her mystical poetry later in life, and the ethical training and education considered appropriate for elite girls at the time.

Chapter 6: The Mirror of Happiness examines the seventeen-year-old Mihr's engagement to Ali Quli Beg, an Iranian soldier and noble. Later sources claimed that Prince Salim was already smitten by her, but Akbar's disapprobation prevented this match from going forward. Ali Quli's participation in the Mughal conquest of Sind led to his rise through the ranks and being posted to Burdwan in Bengal, where Mihr too began to reside after their wedding in 1594. Lal writes that Mihr grew accustomed to the local religious, culinary and administrative habits as she settled into these new surroundings. In 1600, she gave birth to a daughter, Ladli Begum, who spent her early formative years in Bengal. During this time, Salim ascended the Mughal throne and took on the title of "Jahangir" or world-conqueror, but his son Khusrau's failed rebellion remained a thorn in his side. Ali Quli was suspected of conspiring with Khusrau to assassinate Jahangir in 1607, and was killed in a scuffle with the soldiers of Bengal's governor. Mihr, now a widow whose brothers were also killed and her father demoted, was summoned to Agra along with Ladli.

Mihr lived in the harem for three years until she married Jahangir in May 1611, and was given the title of "Nur Mahal" (Light of the Palace). Chapter 9: Ascent and Chapter 10: Wonder of the Age are perhaps the most persuasive parts of the book, where Lal drives home the claim that Nur Mahal had indeed become Jahangir's co-sovereign. By 1614, she had become a force to reckon with, as evidenced by her role in welcoming Prince Khurram on his return from conquering Mewar. Lal explains her charitable deeds and goodwill by making a rather anachronistic claim: "By offering choices to the underprivileged and to the most vulnerable inhabitants of the harem, she had what we might call a 'feminist' moment..." (108). Surely Nur did not see herself as a 'feminist'? Lal shows how Nur's political acumen and leadership abilities, combined with her strong family connections, Jahangir's incapacitating alcohol and opium addictions, and his complete trust in her, contributed significantly to her meteoric rise to power. "Nur Jahan" (Light of the World), as she was later renamed, put Khusrau under house arrest, traveled widely with Jahangir, managed huge estates, visited Sufi saints, and demonstrated her inimitable prowess in hunting and killing tigers. Nur Jahan presided over courtly rituals, openly supported Khurram as heir to the throne after his Deccan campaign, even issued royal orders and coins in her name, culminating in a stunning portrait of her in hunting attire holding a musket by the court painter Abul Hasan.

By 1619, Nur Jahan's governance was unmistakable. On returning to Agra with Jahangir, she performed the jharoka darshan (public appearance in a balcony), unheard of for a woman in Akbar's time. Certainly her authority did not go unquestioned, arousing suspicions among many nobles and court visitors about the negative effects of a woman wielding too much influence. But Jahangir's devotion to his wife was undeterred, as their sojourn to Kashmir, recounted in detail in the Jahangirnama, proves. Nur Jahan's growing rift with Khurram (now Shah Jahan), however, became a matter of concern for the latter, particularly after she arranged the wedding of her daughter Ladli with his younger brother Shahryar. Against the backdrop of the Safavid siege of Qandahar in 1622, Shah Jahan went into rebellion in the Deccan provoked by Nur Jahan's support for Shahryar. Lal astutely notes the gendered connotations of using the term "fitna" (also the title of Chapter 13) to describe Nur Jahan's role in inciting Shah Jahan, who futilely battled the Mughal army over the next two years. But the tougher challenge for her came when Jahangir's hitherto loyal noble, Mahabat Khan, kidnapped the emperor on the banks of river Jhelum near Kabul in 1626. Although Nur Jahan was forced to join him in captivity, contemporary male observers were awestruck by her fearless leadership and strategic plans to escape from Mahabat Khan's clutches and restore her and Jahangir's sovereignty. This victory was short-lived since Jahangir, long suffering from alcoholism, opium addiction and shortness of breath, died soon after.

Following a brief succession struggle, Shah Jahan's accession to the throne in 1628 marked a steep decline in Nur Jahan's authority. She then receded to the shadows and took retirement in Lahore. Lal summarizes the remaining seventeen years of her life in a short and somewhat abrupt ending that leaves the reader wondering why she never strived to regain her status. Why was a co-sovereign's power limited only to the emperor's lifetime? Even if Shah Jahan's chroniclers deliberately sidelined her, are there any lesser-known sources to help us reconstruct this last phase of her life?

In sum, Ruby Lal's Empress is written with a wider, non-specialist audience in mind, and in this sense her book is commendable for its lucidity, accessibility, and lack of jargon. It makes a strong case to reconsider the legacy of one of the most powerful queens in South Asian history, and not relegate women's lives and stories to the singular category of "gender history", as previous scholars like Rekha Mishra, K.S. Lal and R. Nath had done. In urging historians to be better feminists, Lal provides a roadmap for how to ask important questions of our sources about female agency and the ostensible public-private divide. It certainly helps that Lal is an evocative storyteller, allowing the reader to visualize every event and make it come alive in their mind, especially through her vivid descriptions of architectural spaces, ritual ceremonies, urban bazaars, trading commodities, and battle scenes.

However, to a student of Mughal history, the endnotes betray an overreliance on translated or published primary material and secondary literature with minimal use of unpublished Persian documents or manuscripts (the limited Persian in the footnotes is printed disjointedly). There is a tendency to intertwine relatively sparse historical details with the author's speculations and conjectures for the sake of painting a florid, broad-strokes narrative. Further, the work builds on pre-existing biographies of Nur Jahan by Chandra Pant (Nur Jahan and Her Family, Dandewal Publishing, 1978) and Ellison Banks-Findly (Nur Jahan: Empress of Mughal India, Oxford University Press, 1993), which are scarcely acknowledged. Finally, Ruby Lal's own first book, Domesticity and Power in the Early Mughal World (Cambridge University Press, 2005), made the compelling argument that historians need to move beyond valorizing "women worthies" like Gulbadan Begum, Nur Jahan and Jahanara, and locate them within a longer tradition of politically active, literarily talented, independent women in medieval and early modern India. In keeping with this, one would have appreciated a more nuanced historical study of Nur Jahan's life that casts her not as a trailblazing feminist or an exception to the norm, but rather as a product of her times.