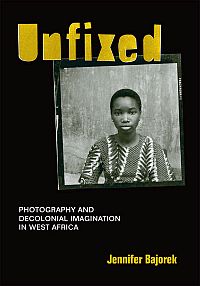 It is no longer possible to keep up with the torrent of books on colonial photography. As the salutary result of continued efforts in the arts and humanities, the centrality of this topic today has motivated a veritable exodus of scholars from other disciplines. After an acclaimed volume on poetry and capital, Counterfeit Capital (2008), Jennifer Bajorek reoriented her research from comparative literature to photography in west Africa. This decade-long engagement with artists, curators, and museums culminated in her new book titled Unfixed: Photography and Decolonial Imagination in West Africa, a prime resource for navigating what can already feel like a crowded and a disorienting field of studies. Out of the recent explosion of literature on media technologies and political narratives in African history, Bajorek mounts quite a compelling case for the centrality of photographic cultures in these processes, investigating how urban west Africans embraced photography in the mid-twentieth century as the means of visual, social, and political experimentation, both in print and public culture. The research is based on fieldwork carried out in the form of interviews conducted between 2007 and 2014 in Senegal and Benin (once part of a French colonial administrative entity, l'Afrique Occidentale Fran&#231aise (AOF)) with photographers and their relatives, with elements of the independence generation, as well as a younger generation of cultural heritage professionals and custodians of photography collections across west Africa.

The most misleading thing about this volume may be its title. This ambitious study whose "ultimate horizon" is "to imagine or envision, through photography, the end of colonial modernity" (31), almost never conjures up "decolonial imagination", and only qualifies it briefly with an obsequious nod to Partha Chatterjee and Walter Mignolo. No less conspicuously, this bid to unfix colonial power relations overlooked the foundational essay on the subject, Homi Bhabha's "The Other Question" (1983). This text not only pinpointed fixity as a major discursive strategy of colonialism (as that which is already known and must incessantly be repeated), but as the theoretical fault line that still splits postcolonial critics - between those opposing colonial fixity so rigidly as to risk replicating it; and those so eager to replace it with ambivalence or hybridity as to risk understating it. This fixity, a significant photographic concept, only appears thrice in the book. However, Bajorek's crucial contribution is precisely to blow apart any lingering ideas of photography as a mode of representation connoting rigidity or unchanging order, opposing the simplistic conceptual binaries of this medium as an instrument either of oppression or resistance, as well as the overly facile ways it has been routinely thought of in relation to the state and the public. On this count, this book is a major breakthrough for theorizing the visual away from the familiar mould of postcolonial studies, marshalling the open-endedness and plasticity of a decolonial process to refuse anything to do with closure, stability, and ready categorizations - echoing Elizabeth Edward's plea for scholars to explore photography's "polysemous nature, lack of fixity and context-dependent modes of making meaning" (2001).

The book has been divided into five chapters organized around two parts. The first part charts the processes of photographic democratization in the waning years of the colonial project in Francophone West Africa. This section privileges the expanding production and circulation of studio portraiture among urban elites, and how such changes dovetailed with new aspirations in the public and political life. The chapter on the illustrated magazine Bingo is very illuminating, rendering it a required reference along Drum or Ebony from now on. It instances not only an expanded model of photography but also the conception of viewing publics away from metropolitan trade routes and beyond the colonial structures of identification and networks of communication, as forms of visual affiliation (pan-African, transcolonial, diasporic) to imagine a new political dispensation and a decolonized subjecthood. The second part of the book looks at the new genres and practices of official, state-sponsored and para-state photography on the eve of independence, reconsidering bureaucratic visuality in light of that "radical opening of both political and historical consciousness". (187) Bajorek considers the documentary impulse to record things in the late colonial period of sweeping changes, and generative or playful experiences in institutional photography. A solid case is made in defense of the enfranchisement through and repurposing of civil identification documentation, usually disavowed by the dominant theoretical models that subsume subjectivity in repressive models of governmentality and state surveillance. In all, this book vindicates photography as "a vital site of decolonial imagination, whether through the unruliness of its circulation, the plasticity of its reference, or its ability to call new publics into being" (194), arguing that it "cannot be grasped within Euro-American frameworks of explained by diffusionist models". (71) This is a significant departure from simplistic versions of dependency theory and center-and-periphery models that are rife in media studies, and the overdetermined ideas of the state and citizenship that rule over photography studies, with their structural limitations in the conception of nation or public sphere.

Bajorek's narrative blends rigorous theoretical inquiry, archival research and a travelogue of sorts. At times, it may read like an ethnographic spoof - as the lengthy takes on a nameless driver in Dakar, "I had begun skipping meals to avoid eating with (being lectured by) my driver" (77); "What would have happened if I had not been fighting with my driver[?]" (78), "A week or so later, I fired my driver". (79) Yet, these digressions are vastly compensated by the rich and sophisticated interarticulation of photographs, interviews and archives, with invaluable insights at every turn. One could hardly overstate the importance of this messy process of finding the archives, rifling through boxes of photography and forsaken underground newspapers, material that is very difficult to track down in any systematic away. Bajorek makes two essential points: on the one hand, images have rarely been integrated into the official and state-sponsored archives of postcolonial West African states, and in most cases did not endure as material objects; on the other hand, she reckons with the depletion of West African collections in the late 1990s and 2000s, exported away from studio, private or community-based archives, which raises issues of ownership and accessibility. This book is then a timely reminder of the importance of working on and with West African collections on site - with a call to create viable infrastructures for local archives -, without indulging in the salvage narratives that have become pervasive among artists, curators and scholars. As such, it is a convincing and promising attempt to start from African examples to redefine the entire theoretical field, and thus, a welcome addition in any photography library.