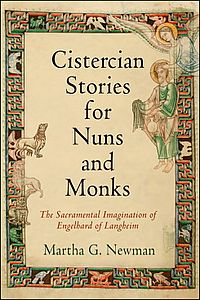 Cistercian monks in the late twelfth and early thirteenth centuries were energetic producers and readers of the literary genre known by modern scholars (but not medieval authors) as exempla. The Collectaneum exemplorum ac visionum Clarevellense, Herbert of Clairvaux's Liber visionum et miraculorum Clarevallensium, the Collectio exemplorum Cisterciensis, and of course Caesarius of Heisterbach's Dialogus miraculorum are the most well-known exempla texts, but they are not the only ones. In this ground-breaking, thoughtful, and imaginative study, Martha G. Newman examines a book of exemplary stories composed in the late twelfth century by the Cistercian monk Engelhard of Langheim abbey in Franconia (as well as Engelhard's other compositions - his Vita Mathildis about the Augustinian canoness Mechthild of Diessen; letters; and a newly discovered devotional work on the Virgin Mary). While focussing mostly on Engelhard's book of exempla, Newman also studies Engelhard's other writings, identifying consistent themes throughout his œuvre.

There is much that is seemingly unique about Engelhard, his writings, and the audiences for those writings. Newman shows an easy command of the wider context of Cistercian life and writings in the twelfth and thirteenth centuries, and one of Cistercian Stories' many strengths is the way it includes well-chosen comparisons and contrasts with other Cistercian exempla collections which, in turn, highlight the ways in which Engelhard's writing had its own driving impulses which were (usually) highly distinctive.

The first interesting thing to note: Engelhard wrote his exempla collection (of 34 stories, although some of the five surviving manuscripts include a few additional stories) for the Cistercian nuns' community of Wechterswinkel. He dedicated the collection to the nuns and abbess of Wechterswinkel in Franconia (according to the maps on pp. 21 and 28 Wechterswinkel was over 110 kilometres north-west of Langheim), "in return for an unspecified favor". (24) No other Cistercian collection of exempla was written for women, which in itself makes Engelhard's book worth studying.

But, second, it is the distinctive viewpoint of Engelhard's texts that makes them so interesting. As Newman demonstrates so clearly, Engelhard presented his readers with guides for individual spiritual formation and, more specifically, an individual spiritual formation that could best be achieved in the immediate context of everyday behaviours and objects (with the important proviso that the individual had to possess the right moral attitude). Further, Engelhard's stories consistently demonstrate the "sacramental possibilities" (47) that could be found in quotidian events and practices within the Cistercian monastery. This is in direct contrast to the sacerdotal religiosity that was increasing in the late twelfth century (as witnessed, e.g., by the increasing sacramental powers of the priesthood, 102).

This takes us to Engelhard's views on gender. In pinpointing the locus of spiritual formation in everyday activities and objects, and in downplaying priestly functions, Engelhard presented a "process of religious formation that he thought nuns and monks could share". (17) Exempla stories of laybrothers who were treated equally to monks, and stories of monks and laybrothers providing mutual support, show that this non-sacerdotal religiosity embraced laybrothers also.

Cistercian Stories opens with an excellent Introduction, spelling out the monograph's arguments in an admirably clear way. After reading the Introduction, readers will be in no doubt as to Engelhard's commitment to teaching faith (fides) and, also, the reasons why his distinctive understanding of how one can develop faith deserve scholarly investigation. As Newman identifies, Engelhard lived in a time of flux; in recent decades monks had increasingly emphasised their roles as priests, universities had quickly rivalled monasteries as centres of learning, and monastic and scholastic ideas about self-formation were both proliferating and diverging. In some senses one may call Engelhard a conservative. He wanted to "preserve a monastic religiosity based on liturgical prayer and contemplation rather than priestly consecration". (6) He was in two minds about the value of written texts. But, at the same time, in his conservatism he produced something new and valuable. His doubts about the value of written texts were of course not absolute. After all, it was via writing that he conveyed his ideas. But he had very strong opinions about what he was not going to write! He refused to write about Bernard of Clairvaux, on the grounds that texts about Bernard's life were already widespread. He was adamant that he was recording things that he had learned by seeing or had learned by hearing, rather than things he had read. For Engelhard, the personal engagement of the individual was essential in the learning process; only a listener, reader, or viewer who possessed the right disposition would be able to learn what was worth learning. Engelhard wrote that there was more learning to be had from experience than from books, and his texts repeatedly assert that a text's messages could only be revealed if the reader possessed a receptive disposition.

Cistercian Stories has six chapters. The first three provide context on Engelhard, the nuns' house of Wechterswinkel, and wider writing trends from the Cistercian milieu and schools and universities. Wechterswinkel was an early foundation of Cistercian nuns, and it grew quickly. Soon after its mid-twelfth-century foundation it had already created two daughter-houses, but by around 1200 it seems to have fallen on hard times. Some deeper contextualisation of Wechterswinkel may have been useful (for example, an explicit discussion of what does and does not survive from its archive), but overall Newman is wise not to claim certainty when certainty is not possible. Indeed, Newman points out that we still don't know how Engelhard (who held an unnamed role "caring for the business" of Langheim, 22) happened to make contact with the Wechterswinkel community. None of the surviving manuscripts of Engelhard's work comes from Wechterswinkel.

The final three chapters examine Engelhard's writing in detail. Chapter Four studies visions of the Eucharist, including insightful comparisons of how Engelhard's stories differ from those in other Cistercian exempla collections. The opening stories in Engelhard's exempla book focus on the Eucharist, providing a Eucharistic theme that was absent in other Cistercian exempla collections. Engelhard's stories of the Eucharist provided layers and layers of interpretation, all to do with the question of signs and meaning. In fact, all of Engelhard's writing was characterised by these multiple layers. Engelhard sometimes wrote in the first person, sometimes interjecting himself into the stories in order to present readers with more knowledge of the situations than the protagonists themselves had. He sometimes wrote in the present tense (in contrast to Caesarius of Heisterbach who wrote in the past tense), inserting himself, and the reader, mentally into the story, all of which exemplified Engelhard's philosophy that the individual should, and could, develop her / his individual self by means of everyday activities in the monastery. Some of the Eucharistic visions are shocking and bloody. A man who saw the Eucharistic wine become blood was paralysed after drinking it. The reason for the punishment was because the man had been in the wrong emotional state (one of horror and disgust at the blood) when he received the sacrament. In another vision, the Virgin Mary dismembered a child. This time, the protagonist was in the right emotional state and, therefore, experienced no horror.

In Chapter Five the visions give examples of Cistercian holiness. Again, there are differences of interpretation from other Cistercian exempla collections, even though the topics (e.g., the Virgin Mary, death) are often the same. Engelhard's Mary was not the Mother of Mercy; rather, Engelhard depicted her more like an abbot. Unlike Bernard of Clairvaux who had argued that labour only had spiritual value if it was voluntary, in Engelhard's stories all labour was valued. Once again, Engelhard offered readers the opportunity to see sacramentality in their everyday activities and, importantly, this was available to nuns, monks, and laybrothers alike.

Chapter Six makes the same point, this time through analysing stories that show the discernment of conscience taking place without the need for priests, all of which would have been particularly applicable to nuns and laybrothers.

Engelhard sent his exempla collection to the abbess and nuns of Wechterswinkel at some point after 1188. Before this date, he had sent a shorter version to Erbo, abbot of Prüfening of the Hirsau affiliation, with whom he engaged in an epistolary correspondence and in which letters Engelhard included some additional exempla stories. But Engelhard had asked Erbo to return the exempla collection to him, on the grounds that Engelhard's abbot had not permitted Engelhard to send the text. From this, it seems we can assume that Engelhard would only have sent the expanded version of 34 stories to Wechterswinkel after having received his abbot's permission. Although we don't know how, or indeed if, the Wechterswinkel community used Engelhard's text, it seems that Engelhard was not the only Cistercian monk at Langheim who thought that it was useful to send Cistercian nuns a text emphasising the equal capacity of nuns, laybrothers, and monks to find resources of spiritual formation in their local communities and local experiences without the need to rely on sacerdotal authority.