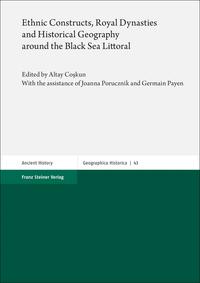 The Greeks called the Black Sea "Pontus Euxinus", the "Hospitable Sea". Although they settled along its shores since the Archaic age, the Black Sea ever remained on the fringes of the Greek world. As a border region, it was the setting of several myths, from the imaginary country of Hyperborea to the deeds of Jason and the Argonauts. In the historical age, the Black Sea continued to be a contact zone for Greek and non-Greek peoples. This was part of the fascination the Black Sea region exerted in Antiquity and continues to exert today. Countless studies have been published on this area, and their number has increased in 2021 due to the appearance of two new, multi-authored books. One is edited by Gocha R. Tsetskhladze, Alexandru Avram and James Hargrave, [1] and the other is the volume under review, edited by Altay Coşkun.

Inheriting the scholarly legacy of his mentor Heinz Heinen, Coşkun is continuing Heinen's studies on the Black Sea area. Coşkun has built up an international network of scholars from several disciplines to investigate the many underexplored aspects of this region (11-12). In collaboration with certain colleagues, Coşkun organised eight conferences between 2013-2019, taking place in Canada, Romania, Poland and Belgium, the results of which are being progressively published.

Ethnic Constructs, Royal Dynasties and Historical Geography around the Black Sea Littoral is the third volume that originates from these conferences after two edited books appeared in 2014 and 2016. [2] It gathers fourteen papers organised into four sections. The first section concerns the ethnicity of the Black Sea people and opens with a paper by V. Mordvintseva reporting the contents of a 1942 article by M. Rostovtzeff regarding the cultural evolution of the northern Black Sea coast to the Roman Imperial age. Making available Rostovtzeff's paper, long overlooked by Western scholars due to its being written in Russian, exchange between the Western and Russian schools is fostered, which was one of Heinen's missions. The three following papers focus on the geography of the Black Sea area and ethnographies of its people. The second section contains contributions about the kingdoms which arose along the Black Sea coast from the Classical to early Roman Imperial ages. G. Payen reassesses the political balance in Asia Minor in the aftermath of the Apamea settlements. Coşkun and G. Stern discuss the identity of the young non-Roman boy on the southern frieze of the Ara pacis, who they identify as a Parthian prince. The two other papers within this section belong to the lively stream of studies in Hellenistic kingship, which recently has focused on non-Macedonian kingdoms. M. Dana argues for the importance of paideia and a philhellenic attitude in the self-representation policy of the Spartokid kings. According to L. Ballesteros Pastor, Mithridates VI's successor in Bosporos, Pharnakes, assumed Iranian symbols and presented himself as an heir of the Achaemenids to substantiate his claim over Asia against Rome. The third section collects three studies by Coşkun about individual issues of historical geography ranging from the extent of Deiotaros' estate to the location of the sanctuary of Leukothea. The fourth section of the book, entitled Cultural Change in Late Antiquity, consists of two papers, the first by D. Roscu, who downplays the influence of Christianity on the urban landscape of the Black Sea region in Late Antiquity. The second paper, by H. Elton, is less related to the section topic, but not less interesting: it stresses the impact of political change on the evolution of agricultural production in the Black Sea area.

The choice to compile a miscellany of papers on the Black Sea area brings with it several challenges. First, it can be difficult to find glimpses of novelty in certain topics which have received much attention from scholars. Coşkun and the other contributors demonstrate that no topic can yet be said to be over-investigated. The papers offer updates regarding long-standing debates, insights on overlooked matters and mark recent progress achieved, improving on the previous state of the discipline. The authors have contributed according to their expertise to a volume which embodies several features of a truly multidisciplinary work, approaching different kinds of sources and making the most of recent advances in the study of the Black Sea area and the ancient world in general. The four sections are set within, and contribute to, current debates on issues that cut across the geographical boundaries of the Black Sea region. This is especially the case for the papers of the first two sections, which comment on kinship models and ethnicity with case studies from the Black Sea region.

As with all volumes originating from conferences, a book like the one under review here can pose problems of topic selection and organization. The umbrella topic can gather an overly heterogeneous set of papers so that their organization into coherent sections is difficult, or chapters can be erratically distributed across the volume causing the extent of thematic sections to vary substantially. Coşkun skips both these issues successfully. He built four well-balanced thematic sections; moreover, he refers to three of them in the book title to make the foci of this collection clear.

In terms of shedding light on matters concerning cultural and political history, economy, geography and archaeology of the Black Sea area, this book is a welcome addition to the burgeoning bibliography of this region.