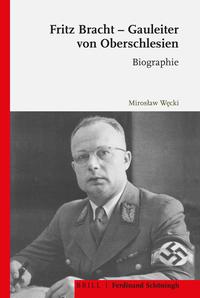 The book is the long-awaited biography of Fritz Bracht, Gauleiter and High President (Oberpräsident) of the Upper Silesia Province (Poland) during National Socialism, written by Mirosław Węcki. This publishing is an acclaimed dissertation that was translated for German-speaking readers by David Skrabania. It was originally published in Polish in 2014 under the title Fritz Bracht (1899-1945). Nazistowski zarządca Górnego Śląska w latach 1941-1945 and claimed the attention of historians and researchers interested in the history of Upper Silesia and the Nazi administrative apparatus. In comparison with other Gauleiters residing in occupied Poland, such as Arthur Greiser or Erich Koch, Fritz Bracht remained an unknown politician who held local power in an economically important part of the German-controlled territories. The role of Gauleiters was highly valued by Hitler, who called them his "viceroys" (Vicekönige). However, modern historians regard Bracht as a weak Gauleiter and of lower importance in German politics. Węcki's book offers an interesting perspective on the Upper Silesian Gauleiter by contextualising his activity within local politics and the wider plans of the National Socialists.

Fritz Bracht was appointed Gauleiter and High President of Upper Silesia in 1941 and kept his position until the end of the war. His life remains a captivating subject for historical research, as Bracht was involved in a wide spectrum of German actions at the local scale, namely the persecution of the Jews, forced labour and Germanisation.

What should be praised first is the in-depth literature review done by Węcki. The author collected and examined an impressive range of literature on the subject: he investigated publications in Polish, German and English. Regarding archival sources, Węcki did not limit the archival research to Polish and German collections, but also conducted extensive archival research in the US and Israel.

This well-organised monograph has a clear structure: it is divided into nine chapters preceded by an introduction. Węcki leads the narration in chronological order, opening the monograph with the pre-war period and setting up the context of Bracht's early life and family background. The author examines the motivation behind Bracht's first involvement in political structures and provides information on the early achievements of the future Gauleiter.

The weight of the book lies on the fourth and the following chapters. The fourth chapter opens up the main part of book, where Węcki describes Bracht's political activity in Upper Silesia during World War II. The historian analyses not only his role as Higher President, but also provides a wider socio-economical perspective on the local enforcement of National Socialist politics. Węcki recognises the complexity of Bracht's position and discusses his involvement in Nazi plans concerning extermination (the Auschwitz-Birkenau camp was located within Bracht's territorial administration), forced labour (with a significant role in Organisation Schmelt), deportations and heavy industrial exploitation. A substantial amount of the book is dedicated to examining Bracht's influence on resettlement actions (with the emphasis on the infamous 'Aktion Saybusch') and the Gauleiter's approach to the Polish inhabitants of the region, including the question of their national identity.

Chapter six, in which Węcki analyses Bracht's involvement in the extermination and persecution of the Jews, plays a meaningful role in the perspective of the whole monograph. The author traces Bracht's involvement in anti-Semitic politics back to his early political career in Westphalia and provides information on pre-war political attitudes towards Jews and the anti-Semitic campaigns led by Josef Wagner - Bracht's predecessor as Gauleiter in Upper Silesia. However, as Węcki claims, the lack of sources on the Gauleiter's direct responsibility for initiating the implementation of extermination politics makes it impossible for historians to verify his actual involvement. Here, Węcki uses the cases of the Gauleiters Greiser and Hank to estimate the possible scope of Bracht's role in the radicalisation of anti-Semitic campaigns (458). However, the Gauleiter's involvement and responsibility for the mass murder of inmates of Auschwitz-Birkenau is not obscure: Bracht accompanied Himmler in the camp's inspection on 17 July 1942, during which he observed the tragic life conditions in the camps. What is more, following Rudolf Höss's account, Himmler (and presumably Bracht) observed the extermination of the newly arrived transport of Jews.

The author also provides an account on the popular recognition of Fritz Bracht, who was not only regarded as a public political figure, but also as a person involved in social scandals. Based on local newspaper articles and post-war memoirs, Węcki seeks to reconstruct the public opinion on the Upper Silesian Gauleiter and attempts to create a consistent public image of him through propaganda actions (244).

An important asset of the monograph that cannot be omitted here is the publication's praiseworthy collection of photographs. Węcki illustrates his study with archival photographs and documents, many of which were not yet published. The visual materials are well tailored to the text, although the size of the photographs is sometimes inadequate (464, 473, 554). However, this is a minor inconvenience that does not affect the overall reception of the book.

The monograph ends with a chapter on the last days of Fritz Bracht and the controversies regarding his death and burial place. In this part, the historian remarks that due to the lack of sources, the case of the Gauleiter's death remains uncertain.

Mirosław Węcki presents a comprehensive overview on the life and political activity of Fritz Bracht. Despite the fact that Bracht acted as Gauleiter and Higher President of Upper Silesia for less than four years, his leading position in the implementation of Nazi politics in the region makes him a central figure in the research on wartime Upper Silesia. The book fully exploits the topic, though the author points out possible opportunities for further research - especially related to unclear information on the death of Fritz Bracht and his wife. It is a multifaceted portrait of the Gauleiter enclosed in the regional political architecture. Anyone interested in the history of Upper Silesia and the structure of the Nazi local apparatus of power will definitely benefit from this volume.