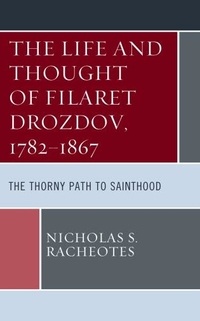 Without question, Filaret (Drozdov) was the most important Russian Orthodox churchman of the nineteenth century. With an episcopal career spanning forty years, he was the metropolitan of Moscow, the second highest hierarch in the Church, from 1821 to his death in 1867. During this time, he was intimately involved in some of the most important moments in Russia's civil and ecclesiastical life: the propagation and abrupt closure of the Russian Bible Society; the Gerasim Pavskii controversy (revolving around the illicit publication of a modern Russian translation of the Bible); the suppression of the schismatic Old Believers in the 1840s and 1850s; the revival of Orthodox monasticism after it reached a nadir in the late eighteenth century; and the 1861 emancipation of the serfs, for which he wrote the government's declaration. Unsurprisingly, he was and is a controversial figure. For Aleksandr Herzen and other members of the radical intelligentsia, he was the face of obscurantist reaction; for the tsar and his government, he was a loyal, if occasionally troublesome, courtier and servitor; for many foreigners, his widely translated works were their first glimpse into Orthodox theology; and for other churchmen, he was something close to a saint, a status confirmed following his canonisation in 1994. Historians are also divided over Filaret's intent, policy, and legacy: some emphasise his complicity in maintaining serfdom and the war waged against heterodoxy during the regime of Nicholas I (1825-1855), while others suggest his relationship with such institutions was far more complex.

Given Filaret's significance and contested image, it is surprising that Nicholas Racheotes' new biography is the one of the first book-length efforts in English to offer a scholarly presentation of the cleric. Racheotes opts for a thematic structure rather than a chronological one, with individual chapters covering Filaret's role as biblical translator, diocesan administrator, hammer of the schismatics, theologian, and apologist for absolutism. As these chapters suggest, the book is principally an intellectual history, with the focus placed heavily on Filaret's theology. In these terms, the tome's author presents a nuanced consideration of the metropolitan's thinking on Orthodox theology and its relation to the social, political, and cultural context of nineteenth-century Russia. By far the strongest chapters are those which discuss Filaret's perspective on church-state relations and the role of monarchs in the Orthodox Church.

However, the choice to focus on Filaret's intellectual output means there is not much discussion of the metropolitan's practical policies or politics as a churchman. Equally, the decision influenced the source base investigated: while Racheotes has made comprehensive use of the published material, practically no archival documents are employed, since one tends not to find theological rumination in the resolutions of consistorial committees. As such, this reviewer found the work to be rather lopsided, an interesting examination of thought without a real consideration of the practical consequence of said thought. Nonetheless, it is conceded that such is a consequence of a justifiable choice on historiographical genre.

Less justifiable is Racheotes' analysis, or rather the frequent paucity of that analysis. All too often in this book, one finds very lengthy quotations from Filaret's works with little in the way of either prior or subsequent discussion. This reaches almost egregious levels in the chapter 'Man of the Word' (on biblical translation), in which we find quotes from Filaret stretching on for page after page: scant justification is provided for such protracted excerpts. Furthermore, there are notable caesurae in this biography, none of which is more glaring than the relative absence of monasticism. In recent years, examinations of Russian monasticism in the nineteenth century have shown that it enjoyed truly dynamic growth, with Filaret often acting as the engine of this blossoming. Not only did he personally live an ascetic lifestyle and encourage other monks to do the same, but he was also responsible for encouraging the foundation of numerous new monasteries and convents in his own diocese and far beyond. His coenobitic rule proved hugely influential, adopted by new religious communities until the end of the Romanov regime and used by multiple Orthodox bishops, abbots, and abbesses in their efforts to reform older monastic institutions. In short, Filaret was a massively important figure in the creation of a modern Russian Orthodoxy that overwhelmingly emphasises asceticism as a core component of its identity. One would not learn this from reading Racheotes' text, where monasticism and its role in Filaret's thought and activities are scarcely mentioned. This is very detrimental not only to the book's evaluation of Filaret as a man, but also its assessment of his contribution to Orthodoxy and the Russian Church.

Regrettably, such problems cannot be overlooked when appraising Professor Racheotes' book. It is certainly a useful primer on certain aspects of Filaret's thought and their connections to the imperial Russian context. However, the author's analysis is overshadowed by quotations, there is little effort to link thought and praxis (or question the nature of that link), and there are severe gaps in the discussion that necessarily force the reader to look elsewhere for an overview. It is thus difficult to consider this work as useful for specialists, although it doubtless will offer some guidance to the more general reader or students on the personality and theology of this truly epoch-defining bishop.