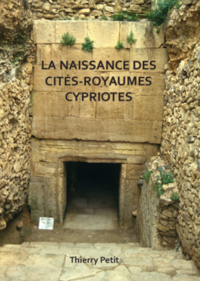 The circumstances that led to the emergence of the several separate city-kingdoms that existed on the island of Cyprus in the first millennium BC until they were abolished under Ptolemaic rule are inadequately documented to date. Until the 1980s attempts to reconstruct the origins of these political entities appealed primarily to legends recorded in classical sources about the foundation of a number of the Cypriot cities that served as seats of rule by Achaean heroes of the Trojan War. In the absence, among others, of substantive evidence for the establishment of Mycenaean type political structures locally from the twelfth century BC onward, attention shifted to alternative possibilities. In one view, initially formulated by David Rupp in print in 1987, [1] the formation of these kingdoms, which are first unambiguously attested in late-eighth-century inscriptions of the Assyrian monarch, Sargon II, would date no earlier than the Cypro-Geometric III period (ca. 900 - ca. 750 BC). It would have been triggered, moreover, by contemporary models of political organization in the Levant, and in particular in the practices of the Phoenicians, whose presence on the island is well attested from the ninth century BC onward. In another view, variously elaborated in a number of studies, primarily by Maria Iacovou, the genesis of the Cypriot kingdoms ought to be traced instead to the Cypro-Geometric IA period, or end of the 11th century BC, and be understood as an autochthonous development that had its roots in the Late Bronze Age. [2]

Thierry Petit's clearly written and richly annotated monograph rigorously queries, inter alia, the validity of the "autochthonous" hypothesis, and lays out methodically arguments (partly anticipated by earlier publications of this same scholar [3]) in defence of a late ninth or eighth century BC date for the emergence of the Cypriot kingdoms and a crucial Phoenician input in this process. Prior scholarship, general theoretical guidelines and particular parameters that define the author's approach, archaeological testimony that can be brought to bear on the subject, and the author's overall perception of this Cypriot phenomenon as subscribing to the broader movement of "réétatisation" in the eastern Mediterranean in the early first millennium BC are treated in 8 separate sections.

An introductory section (I) offers an overview of the hypotheses ("Achaean", "Phoenician", "autochthonous") advanced previously in order to account for the origins of the Cypriot kingdoms.

In section II ("Considérations théoriques: utilité de la typologie") a wide-ranging review of theoretical models and typologies supplies a framework for the author's endorsement of the utility of the concepts of "state"/"king" and "chiefdom"/"chief" and his selection of a set of criteria that could enable one to distinguish between these two types of socio-political organization in the archaeological record, in default of explicit, written testimony about the corresponding forms of governance. The selected criteria focus on the presence or absence of written records, monumental and/or communal structures and organization of crafts and industrial production, as well as on indications of demographic growth, settlement hierarchy and urbanization.

Section III ("Les correlats archéologiques de l'état aux CG III/CA I") and the subsequent section IV (separately treating Amathus as a case study) survey the archaeological evidence that relates to the criteria selected. In the cases of the cities that are attested as centers of Cypriot kingdoms in the Archaic and the Classical period and their territories, the resulting general picture, according to Petit, is one of extensive decline or abandonment in the early Iron Age, an unlikely existence of urban structure on the island in the 11th and 10th centuries BC, and reappearance of urban centres around the eighth century BC. These circumstances, as Petit argues, are also borne out by the archaeological record of the self-proclaimed "autochthonous" city of Amathus, and could equally apply, notably, in the cases of Enkomi/Salamis, Kition and Paphos. Amathus (discussed in section IV), which presumably enjoyed the earliest and most frequent exchanges of all Cypriot settlements with politically more advanced regions outside the island, and especially with the Levant, in the Cypro-Geometric I/II (ca. 1050 - ca. 900 BC), could be, as Petit posits, the first Cypriot state founded in the Iron Age, and more specifically in the end of the ninth century, contemporaneously with the establishment of a permanent Phoenician presence in neighbouring Kition.

The simultaneous appearance of numerous archaeological markers of "state" in the Cypriot archaeological record in the late ninth or the eighth century would indicate, as Petit sums up in section V, that the emergence of the Iron Age states of Cyprus cannot have much preceded that time, and would put a burden of proof on the proponents of the hypothesis that state formation began some three centuries earlier.

Section VI ("Les entités politiques cypriotes aux CG I/II") argues against the notion - which is linked with the hypothesis of the foundation of the Cypriot kingdoms as early as the 11th century - that, in contrast to, say, the Aegean "Dark Age", the upheaval that spelt the widespread collapses of Aegean and eastern Mediterranean states at the end of the Bronze Age had a less devastating effect and only lasted a few decades in the case of Cyprus; hence, leaving, among others, room for supposing some measure of continuity between the Bronze and the early Iron Age. This notion largely rests on indications of social stratification in the Cypro-Geometric I-II derived from burial assemblages of members of the local elites at Kourion-Kaloriziki, Salamis, Palaipaphos-Skales, Amathus and Lapithos. In the general absence in this period of (further) archaeological markers of state, these are here interpreted by Petit with reference, in particular, to analogous contemporary "princely"/"warrior" burials in the Argolid, Euboea and Crete, and as manifestations, in one formulation cited, in both instances of "the 11th-10th century world of the warrior princes", a world characterized by a "lack of any real state organization" (70, wording J. Muhly). The Cypro Geometric I/II landscape of "conflit endémique" and "fragilité du pouvoir" would best conform, Petit argues, with the political structure of "chiefdoms" (in anthropological terminology). As the latter type of structure presents different levels of complexity, it could apply to findings of a succession of pre-palatial phases at Amathus, explored by the author); it could also accommodate, simultaneously, regional variations (depending, for instance, on proximity with Phoenician establishments) (74).

Section VII ("Transition vers l'État. Processus et causes") sets within the frame of the modern theoretical debate about the emergence of "state" the author's perspectives on the circumstances that were responsible for the evolution of the island's chiefdoms into states, and which can be held to account for the moment of this transition in the end of the ninth and during the eighth century BC. Singled out as the most important ones among the various stimuli that conceivably played a role in the process are the development of long distance trade and the establishment on the island of a colonial enclave of a neighbouring civilisation with more advanced organisation, the Phoenicians. The emergence of kingdoms in Cypro-Geometric III would be, thus, a phenomenon of secondary state formation (83).

In the hypothesis defended by Petit, the emergence of the Cypriot city-kingdoms is taken as contemporaneous with or slightly earlier than the appearance of the Greek poleis, which is set in the eighth century BC. Section VIII ("Étatisation de Chypre dans le cadre est-Méditerranéen") revisits the hotly debated question of a possible impact of the Phoenician state model on the widespread resurgence of small states in the eastern Mediterranean (and further west) in the early first millennium BC. It proposes that Cyprus must have been the most important link in the latter model's diffusion which was occasioned by Phoenician maritime commercial expansion in the course of the ninth and eighth centuries BC.

Petit works out a compelling case for the re-emergence of state structure in Cyprus in the early first millennium BC. The systematic presentation of the archaeological testimony with reference to clearly defined criteria enables one, simultaneously, to perceive the numerous uncertainties and gaps in our knowledge (regularly pointed out in the text, and emanating, e.g., from under-exploration of a number of sites and unequal exposure and/or study of different levels to date) that currently stand in the way of any attempt to account in a definitive manner for the genesis of the Cypriot kingdoms on the basis alone of the evidence of archaeology.

Whether or not one fully agrees with the interpretative framework espoused by the author and his various conclusions, Petit's study, ably weaving together theory and archaeological evidence and paying close attention to the nuances of earlier opinions, marks a step forward in the discussion of the origins of the Cypriot kingdoms and provides a useful work of reference on the subject.

[3] E.g., T. Petit: The First Palace of Amathus and the Cypriot Poleogenesis, in: I. Nielsen (ed.): The Royal Palace Institution in the First Millennium BC: Regional Development and Cultural Interchange between East and West (= Monographs of the Danish Institute at Athens; vol. 4), Athens 2001, 53-75.