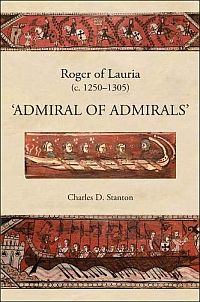 Charles D. Stanton is one of the best specialists of medieval maritime warfare and has worked on the history of South Italy. Consequently it is not surprising at all that he had come to write a biography of Roger of Lauria, one of the best known maritime commanders of the Middle Ages, active during the War of the Sicilian Vespers, at the end of the 13th and the beginning of the 14th century.

The admiral - who never lost a battle on the sea - has been subject of a series of specific studies and some PhD thesis, though this is the first exhaustive book on his life. Stanton's work consists in twenty chapters that combine the biographical notices on Lauria with considerations on the global political and military context of the central and western Mediterranean and with a deeper study of war history. He begins his book with an excursion to the dynastic change in the Kingdom of Sicily in 1266, with the arrival of Charles I of Anjou and the battle of Benevento - a fatal moment, as Lauria's father probably fell in this battle - describing then Roger's stay at the royal court of Aragon, the definitive submission of the Sicilian kingdom by Charles I after the defeat of young Conrad of Hohenstaufen in the battle of Tagliacozzo (1268), focalizing thereafter his interests to the projects of expansion of both Angevin and Aragonese royal dynasties, arriving to the uprising of Sicilian Vespers (1282) and examining in the remaining chapters the long war that followed the revolt.

Among those, the ninth chapter offers an accurate description of the charge of the royal admiral of Aragon and of his duties and the tenth consists in a fascinating description of ships and combat strategies of the time.

The person of Roger of Lauria resulting from this book is of great interest, not only for his capacities as maritime commander, but also for his personal qualities, beginning with his absolute loyalty to the kings of Aragon, in an era where the old knightly values began to be replaced with a mercenary spirit: let's just make a comparison with another Roger, Roger de Flor, active in the same years.

Stanton's book is well written - it reads like a novel - and offers a clear and rational point of view on the complex circumstances he is describing. In my opinion, the most notable passages are those on military history, with, inter alia, the best descriptions I have ever read of a series of crucial battles fought on the sea and on the land in Southern Italy. Therefore, it has to be recommended to persons interested in medieval history and war history in specific, though with some precautions to take.

The problems lie in the general, descriptive part of the book and result from the fact that the academic history of South Italy is written mostly in Italian, French and German and not so much in English. While Stanton uses in the biographical and military part of the book some recent Italian works from authors such as Giovanni Amatuccio and Rosanna Lamboglia, his observations on the general history of the Kingdom of Sicily are based on a reading of the existing primary narrative sources and, as for the secondary sources, almost exclusively on a short series of English written works like the biography of Charles I by Jean Dunbabin (1998) or the history of the Sicilian Vespers by Steven Runciman (1958).

Consequently, there are some conceptual and detail errors. So, for example, Naples was not an unofficial capital of King Manfred in 1266 (9), the county of Provence did not belong to the French realm and depended theoretically from the Empire (11), the role of the pope as feudal lord of the Kingdom of Sicily - a reason why he was active in replacing the king of Sicily - is not mentioned (11-12), the Muslim inhabitants of Lucera were not dispersed throughout the kingdom in 1268 and their community existed until 1300 (67), Boniface VIII was not tortured but (maybe) only slapped (and not by Guillaume de Nogaret but by Sciarra Colonna) in 1303 (303).

A major problem is the description of the Angevin dynasty and administration. The Angevins are represented like cruel and greedy arrogants and their government is said to be based on nepotism (119), but, in reality, their bureaucracy was (even too much) efficient and they cared about the well-being of the kingdom and its inhabitants. The Angevin taxation is described as a new repressive system introduced by Charles I (68-69) but, in reality, it was in perfect continuity with the administration of Frederick II and his sons. Then, barely any distinction is made between French and Provencal and the kings agents are said to be almost all Frenchman (71), while in reality the biggest part of the officers were of local, Italian, origin. Those are very old fashioned concepts, as is also the romantic description of the Sicilian Vespers (81 onwards). Unfortunately, at the moment, no up to date history of South Italy is available in English, while in Italian, new visions are offered by works like Il Mezzogiorno prima della questione meridionale of Giovanni Vitolo and Aurelio Musi (Florence, 2004).

Apart from those considerations, Stanton's book is an excellent work carried out with knowledge and intuition, a fascinating story of a man and his battles, in an era of decisive changes in the Mediterranean and in the medieval West.