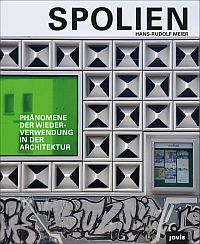 Academic interest in spolia has never been greater, but books on the topic are few, and most are multi-authored. Meier's volume stands out for its single, rigorously disciplined point of view. While contemporary scholarship on spolia tends to sprawl, admitting ever more forms and instances of reuse, Meier deliberately limits his subject to the visible reuse of architectural elements in new architectural settings, predominantly in Europe. This strict focus enables the identification of patterns that transcend millennia, and likewise of material and cultural habits particular to singular times and places.

Initially trained as a medievalist, Meier is now a professor of architectural history and preservation, and his view of his subject is concomitantly expansive. Medievalists will be astounded by the wealth of spolia-using buildings illustrated in this volume, especially from the last 20 years. The book is addressed not only to them, but to anyone in the fields of architecture, history, art history, and media studies. Its stated aim is to provide "a small guide through the jungle of discussions and interpretive approaches" that have accrued to spolia in architecture since Raphael critiqued the Arch of Constantine around 1519 (11, 16-17). Meier has done much more than this. By analyzing the objects, materials, means, and intentions of spolia in buildings from late antiquity to the present day, his book establishes a diachronic taxonomy of architectural reuse.

Meier is intrigued by the role of spolia in contemporary design. This is announced by the arresting photo on the book's cover, a detail of the street façade of the "Bookmark" open-air library in Salbke (Magdeburg, 2008/09) with its geometric cladding of reused aluminum tiles interrupted by a block of solid green on a graffiti-covered socle (also Fig. 106). The aluminum tiles came from a 1960s-era Horten department store in Hamm (North Rhine-Westphalia) that was demolished in 2006. The tiles' dimensions (50 cm x 50 cm) established the module of the external walls of the Bookmark, determining the size - but not the position - of the green glass windows and the vitrines for posting notices. The tiles also contribute to the building's meaning, as recognizable traces of an era of West German materialism repurposed in a building for community betterment in a "problem quarter" in the ex-DDR.

The discussions of the Bookmark's design and its meaning are separated by 60 pages (143-44, 203), in accordance with the book's compartmentalized organization. There are six chapters. The first (Spolia as an Architectural Concept) introduces the idea of spolia as it emerged in the sixteenth century and summarizes the advances and debates of subsequent scholarship, especially of the last few decades. The second chapter (Meaning/Interpretation), by far the longest, establishes a spectrum of possibilities: the construction of heritage and legitimation of rule, booty and trophies, translatio and renovatio, memoria and commemoration, assignment and accumulations of meaning. The discussion begins with the Arch of Constantine in Rome (315 CE), a paradigm of spolia reuse and the locus of much of the current debate about meaning. The upshot of this debate forms Meier's point of departure: spolia are inherently ambiguous because they are subject to polar discrepancies in intention and reception. He draws a comparison with the façade of the East German State Council Building in Berlin (1964; now a school of management and technology), on which the early eighteenth-century "Liebknecht Portal" from the old Berlin Palace (Stadtschloss) was reused. The effect is again ambiguous, as the DDR-era intention to associate the new building with Karl Liebknecht's proclamation of a free socialist republic in 1918 is undermined by the less laudatory evocation of the razing of the Stadtschloss on ideological grounds in 1950. The chapter proceeds with other juxtapositions of medieval and modern examples, notably the twelfth-century Casa de' Crescenzi in Rome and houses in the New Old City of Frankfurt (2012-18), both exemplifying renovatio. Comparisons are flexible, and the analysis of individual buildings brings out numerous subtle variations and sub-groups within Meier's five broad categories of intended meaning. The results of this chapter echo through the rest of the book.

The third chapter (Objects and Places) identifies the architectural elements typically reused as spolia (portals, columns, inscriptions, mall facades [!]) and their ability to invest a new site with the authenticity of their original time and place. Chapter 4 (Materials and their Availability) argues that meaning can depend on the material (marble is historically noble; wood is practical), on the means of its acquisition, and on the prestige of its new context (as in up- or down-cycling). The first four chapters come to fruition in chapters 5 (Practices and Effects) and 6 (Spolia and Design). Chapter 5 is especially rich, treating display, movement, testimony, embodiment, incorporation, and deception; chapter 6, by contrast, is only 12 pages long. More than once Meier alludes to Hegelian sublation (Aufhebung), as in the case of Wang Shu's reuse of vernacular tiles and stones recovered from demolished houses in the walls of the Ningbo History Museum (146, citing Sandra Schramke and Wolfgang Bock). The book enacts its own kind of sublations, as dialectics of intention and availability, object and context, form and material, associations and circumstance create new syntheses throughout the chapters. A final synthesis is achieved in the conclusion, in which the author's previous demonstrations of how spolia work are re-presented under new rubrics: presence and absence, reconditioning, magic, compensation and the promise of authenticity.

For this reader, a medievalist, the last chapters were the most exciting, partly because most of the contemporary buildings were new to me, as were the architects and the studios that produced them. Architects might feel the opposite, preferring the first chapters as less familiar; every group in Meier's intended readership will find something to learn from and to ponder. Yet however exciting, the last chapters were also hard work for an anglophone U.S.-based reader. I had never heard of Hortenkacheln or the Lesezeichen, of Detopak glass or the Bikinihaus, of Hild und K or the bauhaus reuse Pavilion. In Meier's elegantly concise text they all function as examples, and his arguments about them are clear, but I frequently found it useful to seek fuller descriptions and images online. It helped to know the shape, history, and function of the Bookmark, for example, and that the graffiti were part of its design. Should there be an English edition of this fascinating book (which is very much to be desired), it might helpfully be provided with a glossary and an appendix containing brief descriptions of the most important buildings and architects discussed.

This book is a must-read for anyone seriously interested in spolia. The pleasures of the text are matched by the colorful, well-captioned illustrations, which are precisely chosen, perfectly rectified, and beautifully laid out. Kudos to the press for producing such a fine-looking volume.