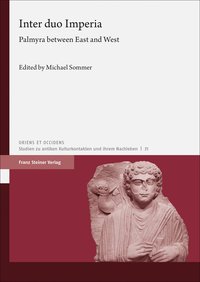 Inter duo imperia, between two empires, are the words of Pliny the Elder describing the situation of Palmyra, a vibrant and wealthy city being amid two major powers of its times (1st century BCE - 3rd century CE): Roman and Parthian Empires. This is also the title of the reviewed volume chosen by Michael Sommer for the collection of nine papers concentrated on the exceptional position of the city and diplomatic skills of its inhabitants which led to a richness and international fame.

Despite it is a collection of articles, resulting from the conference "Palmyra. Orient. Okzident" held in 2018 in Oldenburg there is a smooth transition from one paper to another. It even appears as if the authors of the contributions have a dialogue with the Roman historian to understand what it meant for him and for Palmyra to be inter duo imperia. This includes the most recent history of Syria entrenched between more than two empires and serving as a playground for foreign military actions from the last decade onwards. The essays present innovative approaches to the history of the city looking through the lenses of historical background, archaeological remains, geographical localization, trade and economy, modern social and political studies, revisiting such substantial questions as: when and how did Palmyra join the Roman Empire? Where does the strength of Palmyra and Palmyrenes lie in the context of trade? How did the landscape and hinterland influence and shape ancient Palmyra? And finally: where is the future of modern Tadmor in the difficult political realm?

Michael Sommer opens the book (9-21) with a reference of the epigraphic data from Palmyra to Pliny's narration. The outcome of this assessment is summarized as follows (12): "A city at the edge of an empire does not suddenly become "part of" that empire: it gradually grows into the imperial sphere of power, sometimes at a speed which makes the process hardly noticeable for the contemporary observer (...) A good way of describing Palmyra's status is probably that the city "has been put on a sort of 'waiting list'" (...)." In this conclusion there is a turning point from a concept of "annexation", which is postulated in earlier studies on history of Palmyra. The new idea corresponds better with a complexity of the whole process and individuality of this Syrian city on the international and inter-imperial scale.

The following paper by Ted Kaizer (23-36) is a continuation of the ideas of Sommer. The accent is set here on the unique character of Palmyra among other Near Eastern cities of Roman times. Kaizer focuses on the "Greekness" of the city and presents the history of Palmyra in episodes from the integration into the Roman world during the 1st century BCE until the late antique Palmyra. He points out shortly that the structure of "four tribes of the city" is an artificial construct and is still under discussion. The outcome of Kaizer's paper is that Palmyra was an exceptional case among other Near Eastern cities during Roman times and the only time, when it is comparable to other places, is the late antique phase when it serves as a military station and bishop's seat.

The greatness of Palmyra rests on long-distance trade and excellent diplomatic skills of the Palmyrenes themself. These skills permitted the elites to integrate and circumnavigate between different empires. Michael Sommer points out in his paper (37-46) an interesting concept of gateway city, a term borrowed from political geography designating connectivity between an area to its hinterland and the outside world. In my opinion, it defines Palmyra ideally. The sketch drawn by Sommer from Hellenistic times shows how much Tadmor-Palmyra was connected to the Mediterranean realm as well as Mesopotamia. The archaeological finds such as pottery indicate exchange between Levant and Babylonia already in the 2nd century BCE. This was definitely an important foundation for the boosted trade during the 2nd century CE with the broader world as for example with China and India.

Palmyrenes were omni-present on the "international trade routes", not only until the Persian Gulf and Charax, but also Egypt, Arabia and the Red Sea. Matthew A. Cobb (65-83) presents the textual evidence from Koptos, Dendera, Berenike, Myos Hormos in Egypt and in Shabwa, Al Uqla and the Hoq Cave on Socotra in nowadays Yemen - with the inscriptions mentioning Palmyrenes. Cobb poses an intriguing question how the Palmyrenes could arrive to such distant places and puts in doubt the sea route favoring the land connections and proposes the exact months when such trips between the homeland city and other places would have been possible. It would have been a great value for the book and to further the understanding on the network of roads if the author had included the maps to which he refers (70, fn. 34: Map 2 while there is no map published in the reviewed volume).

The topic of trade and merchants is also touched on by E. Heldaas Seland (85-94) and Ann-Christine Sander (95-108). They both focus on the elites and the status of the rich merchants. Seland mentions for example those traders who owned ships. This exceptional major investment of Palmyrenes deserves definitely notice as a major contribution to international long distant trade. Furthermore, he reveals a shift in the city elites marked in the epigraphic and archaeological sources. Merchants become a new elite in the 2nd and 3rd centuries CE who built a new style of tombs (temple or house-tombs richly decorated). The change in the society he links with the function of the archemporos, head-merchant and the increasing status of the traders. The "merchant princes" of Palmyra are comparable to the medieval trading powers, as Seland points out.

Ann-Christine Sander, however, concentrates on the representation of the new elite members in the art, mostly funerary reliefs and inscriptions. She presents a summary of a complex epigraphic research and noticed nine local "trading aristocrats" honored with inscriptions and statues. Sander based her study on the sociological approach and the concept of four types of power: social, economic, military and political. She mentions among others a figure of Yarhibol, son of Lishamshu who obtained honors for being an ambassador in Elymais in 138 CE. Sander states that he "maintained networks with influential people in both empires and could act as a political gatekeeper" (99). This was very essential for Palmyra being "inter duo imperia"!

Many centuries have passed but Palmyra and Syria can be still seen as a card between empires in the light of the most recent events. The last paper in the reviewed volume takes the reader to the nowadays Syria and its turbulent political situation. Alexander Will, journalist and specialist in Islamic Studies, presents modern Palmyra in the scope of the conflicts and the control of foreign forces: Russia, Turkey, Israel, the United States and the European Union over Syria, from the perspective of the last 4 years. Firstly, he provides a draft of the situation in Syria, accentuating strongly the fragmented and multiethnic composition of the state and analyzing how this influenced the Civil War since 2011. Since 2018 the conflict in Syria has been reinforced with the involved foreign political powers. The contribution which is full of quotations from media analysis shows the position of contemporary Syria between the empires of Russia and Turkey mostly and the minor position of the USA and EU. Will speculates how and in which direction the situation will develop, but he is sure that the future of Syria depends on the "players" from outside and the emerging role of the Russian state not only in politics but also in archaeology and heritage preservation.

The reviewed volume under the editorship of Michael Sommer presents comprehensive language and still preserves a certain lightness of the content. The papers are ordered in a way to guide the reader through the complexity of Palmyra including its status and position. The book gives an impression of a continuous narration like in a novel, and makes it easy to read even for non-professionals. The only pity is that the book is so short and the reader would wish to continue reading, something rare among scholarly publications.

On the whole, it is a significant publication and comes in a critical moment to prove that studying Palmyra is not the care about a "heap of stones", but about world cultural heritage which could serve as identity marker for displaced and suffering people in the time of an ongoing Civil War in Syria.