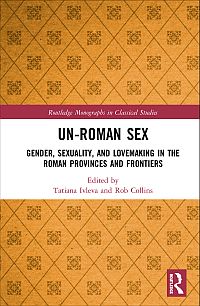 Long before I wrote The Garden of Priapus, I spent two summers in the Scottish Field School of Archaeology; among the few finds was a fragment of a jet bracelet. Thirty years later, writing on "Sexuality in the Roman Empire," I carried out a thought experiment and sent the Kinsey II Expedition back to question all kinds of people about their sex lives, all over the empire, from 14 to 476 AD. The big takeaway: how full of holes the resulting survey was; I ended with the hope "that [in fifty years] archaeologists will have figured out how to do an archaeology of sexuality." In Un-Roman Sex, then, we have a rare example of a scholarly wish come true, and in record time. Other Kinsey II observations: "The Romans were the only culture in the empire to deck the walls with rows of phalli" and "they must have seemed odd sexually to many of their neighbors"; "it seems possible that the Celtic and Germanic tribes were more gender-egalitarian than the Mediterranean cultures," but unfortunately we know those tribes mainly post-conquest; "slavery would have introduced conquered peoples to the Roman sex/gender system at the lowest level." [1] Un-Roman Sex deals fully with all these issues but the last.

With enthusiasm, vigor, and courage (for, as the editors say, provincial archaeology remains a conservative field), this volume's contributors fill in the holes in the Kinsey II survey with small finds. That fragment of a jet bracelet turns out to have been a harbinger. The collection consists of nine chapters, along with an introduction by the co-editors and a conclusion by the art historian Sarah Levin-Richardson - an inspired choice, grounded in the work she has done to restore subjectivity to the writers of Pompeii's most explicit sexual graffiti. The collection grew out of discussions at TRAC and panels at the Congress of Roman Frontier Studies and in Rome in 2014-2016. The book is lavishly illustrated, including many rarely-shown objects that should now become widely taught and studied; most chapters incorporate maps as well. The geographical span takes in not only the northwestern provinces (chapters 2, 3, 5, 6, 8, 9) but Slovenia (chapter 7), along with the helpfully synoptic chapter 4 and the Sardinia-to-central-Asia stretch of chapter 10. The newness of the material demands catalogues (7), and chapters 5, 9, and 10 feature extensive, well-documented ones (phallic and vulval images; phalli on Hadrian's Wall; faïence flaccid phallus pendants), as does chapter 2 on a smaller scale (knife handles showing group sex).

The standout is chapter 5, Stefanie Hoss on female genital imagery in the Mediterranean and throughout the northwest provinces. Hoss makes a comprehensive effort to see and catalogue vulval images in apotropaic objects (amulets, horse trappings) in the context of full-body representations of women and alongside the well-known phallic amulets, which, as she illustrates, are often composite. In order to understand the difficulty we have in seeing vulval images, Hoss herself carried out an experiment in which participants were asked to draw three images: "a penis, a vulva, and a human face showing only nose and mouth" (121). Everyone could draw a penis, all much alike; vulvas, on the other hand, no. Hoss posits a cross-cultural taboo on the representation of female genitals; we can at least concede a problem in conceptualization. Most welcome were the discussion and thought Hoss puts into scallop and cowrie-shell shapes, which, I would add, do find some confirmation in comedy (Plautus Rudens 704; goes back to Sophron). Whether the users of these objects saw a cowrie-shape as vulval is a question for Kinsey II.

In chapter 9, Rob Collins presents a comprehensive catalogue and discussion of all the phalli on Hadrian's Wall based on autopsy, including measurements. He also tried his hand at recreating these stone-carvings, both incised and sculpted in relief, to see how long it would take to make one. Descriptions of context are detailed; I was delighted to find the phallus from the Chesters bridge abutment and its mysterious target (287; still mysterious). Collins is, though, too wedded to an apotropaic explanation of all these phalli; surely some are there just to be rude, like the ones in library carrels: microaggressions. What does not work in this chapter is the typology Collins creates, which I am sure got a big laugh in conference presentations (283-84): Rocket, Hammer, Kinky-Winky, Splitcock, Pointer, Double-Dong, Running Hard, and Beast (not on Hadrian's Wall). Worse, the category names given to proportionate length: width ("chunky/mean/slim," 282) result in discussions of "mean Rockets." The editors, in an introductory challenge (14), note that Collins' typology "may be jarring for some scholars and seen as inappropriate. But is it so?" Yes, also counterproductive: (a) the Rocket is by far the most common, the rest are very rare, and (b) it is hard to imagine these types being used by the scholars the editors are trying to win over.

The sleeper in the collection is Alissa Whitmore's chapter 10, on flaccid phallus pendants - as Levin-Richardson says (346), "virtually unknown." These small, blurry objects form a sparse string on a distribution map (312, fig. 10.2) to which my first reaction was that this could not be a true representative sample, spattered as these objects are from Sardinia to Gorny Altai. But the distribution is the point; Whitmore demonstrates the circulation of amulets that are then juxtaposed on amulet strings, with a far-flung cross-cultural diffusion through trade, the meanings of each object shifting with movement and according to juxtaposition. She throws in a spectacular Etruscan (?) bronze of a boy wearing an amulet string (fig. 10.5). In a book full of wonders, this chapter most captures the imagination.

John Pearce (chapter 2) presents an eye-popping set of anthropomorphic knife-handles showing group sex (three participants: woman held up on the shoulders of a kneeling man while she is penetrated by a standing man). Most come from folding knives, and, after analyzing the gender/status roles on each handle, Pearce complicates them by pointing out that when you close the knife the blade slices vertically through the dominant male (33, 45). His discussion of the "archetypally servile" pose of the kneeling man (37-38) is the best treatment in the book of slavery-related issues, and Pearce finishes with a thorough, thoughtful, wide-ranging discussion of what such a knife might mean to various kinds of users, including fans of sex shows near military bases.

All four chapters could well be assigned to students, along with the more technical chapter 7 (Kaja Stemberger on female burials in Slovenia, an excellent demonstration of what you can do with a well-documented cemetery, considering the politics of excavation and interpretation).

I would have liked to see more attention paid to slavery, to the hybridities produced by military rape on first contact, and to the tracking of human cargo along with small finds. Two of the chapters (3 and 6) were not really ready for publication, and in general the collection needed better editing, not only for mechanics; all of the little Latin quoted had typos and mistranslations. The lack of editorial oversight is especially visible in the three chapters by the editors themselves: the introduction is ill-informed about the history of the subfield, while Tatiana Ivleva's chapter 8, on same-sex male couples on Roman military tombstones, argues well past what the evidence supports. It was good to see Catherine Johns' early work widely recognized.

I can't agree with Levin-Richardson that the tired old Priapic model needs demolishing, or that this book helps do that (351), but she rightly says that scholars who stick to the Mediterranean miss a lot. Courses on women, slaves, and/or sex in antiquity should always go for geographical spread and voices outside the metropole. With Un-Roman Sex, we all now have a wish come true.