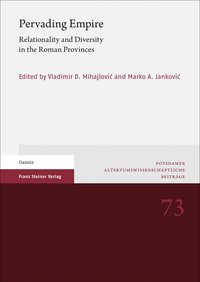 Since the inception of the Theoretical Roman Archaeology Conference (TRAC) in 1991, there has been an increasing interest in the application of a range of theoretical perspectives to the archaeology of the Roman world. This is often seen as a predominantly Anglo-Saxon obsession and is contrasted with the continuation of predominantly empirical traditions of research elsewhere in Europe. Although there has been an element of truth in this characterisation, the situation is rapidly changing with much broader discussion of theoretical perspectives illustrated, for instance, by an increasingly broad participation in TRAC.

This broadening of interest has been accompanied by a widening of theoretical perspectives, a diversification of the subjects of study, and a shift in focus to a broader geographical range across the Empire. Within this increasing landscape of research Marko A. Janković from the Department of Archaeology, University of Belgrade and Vladimir D. Mihajlović from the Department of History, University of Novi Sad have organized a series of meetings on 'Imperialism and Identities at the Edges of the Roman World'. The present volume publishes a variety of papers from these meetings, providing a valuable insight into a range of current research.

In their introduction Janković and Mihajlović draw attention to the move away from approaches dominated by 'grand narratives' and towards 'particular and clearly defined case studies that are maximally informed with recent theoretical-methodological approaches' (9). The volume is certainly successful in doing this, although by illustrating 'the diversity of potential perspectives and the variety of reflections of bits and pieces of the Roman World' (10) the book lacks a very clear focus. That said, it contains a series of stimulating contributions that provide much food for thought. In doing this, the volume is loosely organised around themes of 'Relationalities, diversity if intercultural contacts', ' Producing landscape and architecture', 'Entanglements of humans and things', and 'Entanglements of humans and divine entities'. It is particularly valuable in offering contrasting perspectives from a range of different geographical areas and contrasting academic traditions, and in particular, in highlighting research from some younger scholars. In contrast to much of what has appeared in the TRAC volumes, many of these contributions also draw heavily on historical, epigraphic and literary sources as much as the material evidence. Whilst this is in many ways a strength, it also sometimes highlights the lack of really good excavated evidence that might potentially contribute to the debate. If the subject is to move forward, it must be driven by the need to enhance the evidence base through new fieldwork which should be driven by the types of question posed in many of these papers.

Given such a rich collection of papers, it would be invidious to pick out just a few for detailed comment in this short review, but I would like to draw attention to a few ideas that particularly attracted my attention. In the area of reading and understanding iconography, I found Nirvana Silnović's paper which draws on neural research especially interesting, introducing an approach which has considerable potential in archaeology, and using these ideas in ways that could change our approaches to the study of other small objects that are too often omitted from archaeological narratives. Second, as someone who has spent time thinking about the problems of how Rome integrated diverse societies into the imperial administrative system, I found Inés Sastre's summary of the issues of social and territorial change in NW Iberia especially valuable in showing how rural societies in this region were dealt with by Rome. Her account suggests important ways in which other areas without string urban traditions might be reconsidered, but for me it also raised again questions that I have previously considered [1] over how this tied in with structures of military recruitment in this region which she does not consider in her paper. In a similar vein, the papers by Antonio Rodríquez-Fernández (on NW Iberia) and Vladimir D. Mihajlović on SE Pannonia also address the complex issues of Roman integration of local peoples in interesting ways drawing on a variety of new information. Other readers will undoubtedly find different papers and themes from this rich collection that will relate to their own thinking and research.

On reflection, however, I am left with some uncertainty about this book, excellent though some of its contents are. On the one hand, its diversity of approaches and subjects of study mean that it is rewarding to read. In this sense it perhaps reflects something of the diversity of the Roman Empire itself, a product of complex processes, both with aspects of a sameness that makes it 'Roman' and at the inherent diversity that reflects its geographical and social disparities. On the other hand, its lack of coherence perhaps threatens to leave it on the margins of debate as it will be difficult to attract readers to look it as a whole.