Andrea Nicolotti: From the Mandylion of Edessa to the Shroud of Turin. The Metamorphosis and Manipulation of a Legend, Leiden / Boston: Brill 2014

Mary Dzon: The Quest for the Christ Child in the Later Middle Ages, Philadelphia, PA: University of Pennsylvania Press 2017 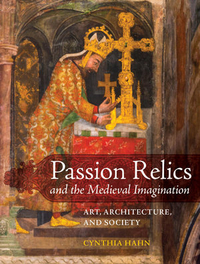 Long neglected in scholarship, medieval relics have become the focus of important art-historical research in the last two decades. In 2010, a major exhibition organized by the Cleveland Museum of Art, the Walters Art Museum in Baltimore, and the British Museum offered the chance to work out a status quaestionis and was a turning point for a new wave of studies. [1] In keeping with the present-day efforts to give a new dimension to our understanding of materiality and its agency on cultural and social life, a new interest aroused in the role played by relics in signposting, symbolizing, and embodying the divine sphere. Cynthia Hahn's seminal works have been pivotal in promoting new perspectives on the complex dynamics by which holy mementoes came to be experienced via their complex relationship with the reliquaries housing them, the latter's precious materials, and shifting shapes. In recent years, the questions underlaying her approach shifted from an emphasis on the connection between sacred matter and its containers to an increasingly deeper investigation of the iconicity of relics themselves, their different forms of mise-en-scène, and the sensorial forms of apprehension they are expected to engender. [2]

Hahn's new book is smaller in size - being the reworked version of a series of lectures in honour of former chancellor Dr. Franklin D. Murphy, held at the University of Kansas in 2019 - but it stands out for its different focus. Instead of bodily remains, the relics dealt with in the text belong to the very special category of the material reminders of Christ's Passion. The choice is compelling, since it enables the author, in her introduction (1-6), to raise some methodological questions as to the notion of "relic", its status, and its material and sensorial dimensions. The use of the word relic (from Latin reliquia meaning "remnant") is itself problematic when used to describe Passion mementoes. Unlike martyrs and other saints, in the latter case individual and collective devotion can only be addressed to inanimate objects that were involved in the drama of Christ's death, whereas His resurrected body is no longer accessible to believers. To some extent, the instruments of his tortures participate metonymically in the Son of God's physicality, given that they can be regarded as sacred matter hallowed by contact with His incarnated body. Their cultic efficacy resides in their capacity to evoke their association with Christ on different functional and semantic levels, while conflating the divine and human dimensions, blurring the boundaries between sacred time, everyday time, and eternity, and working simultaneously as things, signs, images, and cult-objects.

The first chapter illustrates this complexity through the example of the true cross. After describing the most important moments in its history, it offers insight as to its semantic complexity as a material indicator of both human death and divine glory, as holy thing and sacred sign, as liturgical tool and focus of worship. As an outcome of this same complexity, the believers' approach to it implies a wide spectrum of experiential practices. It comes to be used as symbol of imperial power and to be regarded as a surrogate of Christ's body and a marker of site-bound holiness, evoking the centrality of Golgotha and the authority of Jerusalem.

In chapter two, emphasis is laid on the differentiated, and multi-layered experience of Passion relics in the Middle Ages, by adopting an approach that is both typological and diachronic. The author not only describes the distinctive qualities of each of the most famous relics (crown of thorns, nails, titulus crucis, lance, cloths, sponge, column of Flagellation, blood), but also stresses their frequent association in cultic experience, which found its most evident expression in the making of the most important relic collections of the Medieval world - Constantinople's Pharos chapel, the Roman Sancta Sanctorum, Saint Louis' Sainte Chapelle in Paris, and so on. A single fragment - be it the cross or a holy thorn - was not enough to transform a church treasury into a holy site, but their combination did: all together, they became agents of a translatio Hierusalem and, on account of the increased visibility they offered to their royal patrons, they managed to transform the latter into new Constantines.

The author sees this process as the outcome of tendencies already alive in early Christianity and gaining strength with the increasing devotion for the most dramatic aspects of the Passion narrative. The material instruments of Christ's tortures were viewed and contemplated as visual indicators of his multiple sufferings. The material objects, concealed in the treasures of emperors, popes, and kings, were ideally appropriated - the author speaks of a "popular repossession" (101) - in a kind of pictorial transposition, where they served as images supporting the empathic meditational exercises fostered by mystics and shared by many among lay believers. It is doubtful, however, to what extent this development should be understood in terms of an opposition between rulers and people, and there are doubts if the former may have been enabled to make use of the relics themselves as visual supports for their own meditational practices.

This leads the reader to the question of the specific iconicity of Passion relics, which is directly connected to their conditions of visibility. Does it prove useful, in cultic terms, to make sacred matter accessible to sight, or is it better to conceal and reshape its materiality through its enshrinement in a sumptuous reliquary? What is the difference if compared to the practices associated with bodily remains, and how does it change in the course of time? Another question that might raise concerns is, once again, the definition itself of "Passion relics". Apart from the major and better-known items, it is not clear how many other associated objects, among the many visualized in the Arma Christi imagery, came to be regarded as worthy of worship. In what sense, for example, could a coin from the thirty given to Judas - being far from unusual in church treasuries [3]- be viewed as belonging to the same category of holy mementoes that included the cross and the crown of thorns? Could things be regarded as "holy" only because of their association with sacred history, even if they had not been hallowed by a direct, physical contact with Christ's body?

[2] Cynthia Hahn: Strange Beauty. Issues in the Making and Meaning of Reliquaries, 400-circa 1204, University Park, PA 2012; Eadem: The Reliquary Effect. Enshrining the Sacred Object, London 2017. Cf. also Cynthia Hahn / Holger A. Klein (eds.): Saints and Sacred Matter. The Cult of Relics in Byzantium and Beyond, Washington 2015.