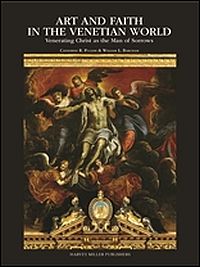 Images of the dead body of Christ displaying his wounds from the Passion and Crucifixion were popular enough in early modern Venice that, unique among European cities, the iconography was given a specific nomenclature in the local dialect: Cristo passo. The luxurious volume under review offers the first extensive study of that iconographic theme from roughly 1290 to 1700, and it demonstrates with plentiful color illustrations the great diversity of images of the suffering Christ in early modern Venetian territories.

Scholars have long recognized that the iconography of the Man of Sorrows descends from Byzantine icons showing the dead Christ. In Byzantium there were several variations on this theme, some inscribed with the Greek phrase Basileus tes Doxes (King of Glory) and others labeled Akra Tapeinosis (Utmost Humility). Transplanted into the particularly fertile artistic ecology of the Venetian empire, these iconographies ramified, generating a network of images that confounds any strict iconographic taxonomy. The varieties of the Venetian Cristo passo are explored over three chapter that unfold chronologically.

The first chapter moves through an impressive array of images across a variety of artistic media produced roughly from 1290 to 1425. These include monumental wall paintings, small devotional pictures, architectural sculpture, freestanding sculpture, monumental tombs, manuscript illuminations, liturgical instruments, and reliquary altarpieces, among others. At the center of this chapter is Paolo Veneziano's Pala feriale, the weekday altarpiece that covered the ornate Pala d'oro in the Ducal chapel in San Marco. On the altarpiece, the Man of Sorrows was aligned visually and thematically with stories associated with St. Mark, the city's patron saint, and this alignment buttressed Venetian identity in ways that had a lasting impact (55). This is demonstrated through a spectacular series of objects, the most delightful of which is a Host monstrance held in the Museo Diocesano of Treviso; inside the reliquary, at the base of the pincers that hold the Eucharistic wafer, is an image of the Man of Sorrow with instruments of the Passion. Invisible to all but the most privileged clerical beholders, the illustration of this tiny enamel picture is evidence of the kind of close looking that characterizes this study.

Chapter two narrates the transformation of the Man of Sorrows from about 1425 to 1510. The chronological cut is justified by the first surviving use of the Venetian term Cristo passo in a bequest of 1422 (102). The chapter opens with an exploration of the full-length, standing figure of Christ showing his wounds and spilling blood into a chalice. The obvious Eucharistic connotations of these images are further investigated in sculpted tabernacles. But the treatment of these extraordinary images is hindered by framing them as somehow lacking, waiting for the fulfillment offered by Donatello's bronze Man of Sorrows (ca. 1448-1449), which was part of the high altar in the Santo in Padua. Donatello is credited with most of the innovations that mark the Man of Sorrows in the fifteenth century, and in the authors' estimation "Donatello's genius speaks for itself" (123). A questionable cult of genius suffuses the chapter, as does an insistence on a unidirectional flow of artistic creativity from Tuscany to other locations. The authors assert that "Tuscan influence" and "Florentine authority" are manifest in works produced by Venetian and Veneto artists (122). They also downplay other artistic media at the expense of easel painting. These tendencies are emblematized by the discussion of Filippo Lippi's painted reliquary cover for the Santo in Padua (ca. 1434), which, the authors argue, "distinguishes itself" from a series of exceptional works of gold- and silver- smithery, "implying," they surmise, "that whereas gold- and silversmiths rarely altered the trajectory of the figure on their ecclesiastical object, first-rate artists did" (148). The sensitivity to diverse media that characterize the discussion of the Treviso reliquary in chapter one is lost, and painting is privileged above all other artforms. The strongest parts of this chapter are dedicated to investigating the use of the Man of Sorrows for private devotional purposes and for sodalities like the Monte di Pietà (184-201); in those moments, the creative churn inspired by the figure of the suffering Christ breaks from the competition for artistic primacy. Great art shines through precisely where the authors cease advocating for great artists.

Chapter three covers the next century or so, roughly 1510-1620. While the chapter includes major figures like Titian, Veronese, and Tintoretto, it also introduces several lesser-known artists, who made exceptional contributions to the theme. The reverence for established "genius" carries over into this discussion. Silvio Sedrina, for instance, was likely the first artist to include the Man of Sorrows supported by angels as the centerpiece of an altar pala, but the authors see in this a cautionary tale: "That a painter largely ignored today claims that distinction reminds us that not all iconographic innovations spring from artistic genius" (225). Again, the chapter's strongest contribution comes when the authors focus less on artists and more on institutions: the centrality of the Cristo passo for Venetian confraternities of the Holy Sacrament created a great variety of exceptional art, from paintings to illuminated manuscripts, from sculpted processional standards to marble tabernacles, and the analysis of this art (231-44) is astute and well-argued.

As the chapter progresses, the variety of images of the suffering Christ become clear. At moments Christ's body is presented alive and breathing, as in Titian's Ecce Homo on slate; or cradled by the Virgin Mary, as in the Ubeda Pietà by Sebastiano del Piombo; or laid out on a cold slab as angels prepare it for burial, as in paintings by Paris Bordone and Marco Basaiti; or worshipped as it ascends into heaven borne by angels, as in painting by Sedrina and Paolo Veronese. The authors suggest that the proliferation of images of the Man of Sorrows might be connected to the calamites that befell the Venetian empire in the years following their triumph at Lepanto (265-67), but also to the "official Church doctrine codified at Trent" (289).

The history of images that began with Paolo Veneziano's medieval Pala feriale culminates in Palma il Giovane's baroque altar ensembles for San Zaccaria and San Lio. A substantial Epilogue then traces these developments down to the year 1700. Overall, the book demonstrates how "Iconographic flexibility kept [the Cristo passo] vital, stimulating differing calibrations of the balance between the traditional symbolic meaning of the image and narrative reflections" (289).

This study offers a sweeping chronological take on Venetian art, but it falls out of step with the current field of early modern art history in several respects. First, its adherence to a history of art centered on "great artists" and "genius" appears overly simplistic and is contradicted by the example of Sedrina. Second, for a book committed to the "Venetian World", a critical appraisal of artistic geography is lacking. At the opening of chapter two, the authors acknowledge that "Much of what we now call Venetian Renaissance art was in fact Paduan or Vicentine or Veronese art" (101). Elsewhere in the chapter, though, there is a strong implication that these cities are part of "the periphery". For instance, some of the most compelling paintings in chapter two are oddly discounted because artists like Liberale da Verona, Domenico Morone, and Francesco Benaglio operated in Verona rather than Venice, which the authors insist must be the "gravitational center of change" (193). And yet, Donatello did not stage his novel conception of the Man of Sorrows in Venice, but in Padua: is Padua somehow both periphery and center? This is the kind of question scholars have become accustomed to asking since the publication of the seminal article by Enrico Castelnuovo and Carlo Ginzburg; "centers" and "peripheries" are now understood to be mutually constituted through the mobility of artworks and artists. [1] Although the book examines works of art that were sent all over the Venetian sphere of influence (Genova, Crete, Trieste, and many other destinations), there is little concern for what this means within the broader political, cultural, and diplomatic economies of the Venetian empire, for how artistic geographies manifest cultural and political concerns.

In sum, this is largely an iconographic study that follows a teleological narrative motivated by genius artists whose influence radiates from center to periphery. Such a framework is more reflective of nineteenth-century conceptions of Renaissance artistic development than of the production itself. Methodological shortcomings aside, this handsomely produced volume offers in its 252 color illustrations a rich archive of objects, many of which have never been published in color before. The sweep of the argument will undoubtedly change the way Venetian art is taught, and even if the lengthy chapters (about 100 pages each) will be difficult to incorporate directly into syllabi, this volume makes new material and lines of inquiry available to students and scholars alike.