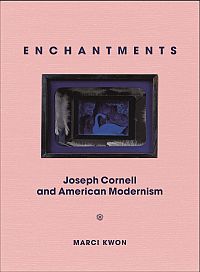 Linking Enchantments with Modernism in the title of this book may not at first glance seem appropriate. After all, it was in the influential lecture, "Science as a Vocation", that Max Weber put forward his thesis on modernity as a force that would bring about the "disenchantment of the world" [1]: a world increasingly defined by drastically diminished religious faith, specialisation and life divided into disconnected and irreconcilable facets, resulting in a loss of unity and meaning. In this atmosphere the work of Joseph Cornell (1903-1972) is considered by Marci Kwon. Here we find a practice concerned with an appreciation of art movements that resisted Weber's disenchantment, humble everyday objects and an adherence to Christian Science, religious beliefs that the author states formed the basis of Cornell's enchantment. Through his constructions, films, collages and other designs, we are presented with the view of an artist striving to "find resources and richness in a fallen world" (xii).

This volume is not to be taken as a full account of Cornell's artistic development; rather it seeks to trace the course which led Cornell through various cultural spheres, whilst expressing the complexities of enchantment and disenchantment in his work within the context of mid-century American art. It was in the 1920s that Cornell began to collect the assortment of objects and other materials that would act as a foundation for his future work, together with concentrated research on Romanticism, Symbolism and Transcendentalism, movements that were seeking religious power through art, ideas and nature, rather than the divine.

We find that the Romanticism of Théophile Gautier and Gérard de Nerval was valued by Cornell for the primacy placed on the aesthetic, providing a link to the past and experiences of others. Cornell was inclined to choose objects which appealed to his own sense of enchantment rather than those of financial value. The aforementioned movements, the cinema and New York's "Book Row", an assortment of shops to be found between Astor Place and Madison Square Park, provided a rich source for Cornell's art. For Kwon, Cornell's "life and art were driven by a belief that there was more to the world than just its material substance, for how could mere materialism account for the beauty, poetry, magic, and spirit he experienced?" (188).

On December 12, 1931, the gallerist Julien Levy first staged the show Surréalisme in New York, for which Cornell designed the catalogue and where his work was first shown publicly. The formal similarities between Cornell's montages and the collages of Max Ernst were initially what gained Levy's interest. However, for Levy, Cornell also embodied the idea of a self-taught artist working in isolation, who manifested concepts of Surrealism in his own work. From here, we see how Cornell was chosen by Levy as an exemplar of the movement, and the way this led to a reductive take on Cornell which persists to the present. Cornell never considered himself an official Surrealist, and attempted to distance himself by describing his methods as "white magic" in comparison to those of the Surrealists: "I have never liked the kind of black magic that Dali, Breton etc. go in for - It's always seemed cheap to me [sic]". [2] Nonetheless, Cornell aligned himself with the movement during its mid-century vogue to support his family, also contributing to fashion magazines such as Harper's Bazaar, and having his graphic design work commissioned throughout the 1940s and '50s. Cornell's presumed proximity to the Surrealist movement was further compounded by André Breton and Paul Éluard's decision to include his work in the celebrated 1938 Exposition Internationale du Surréalisme in Paris.

Along with more commercial projects, Cornell produced designs for specialist publications such as Lincoln Kirstein's Dance Index (1942-1948), which aimed to achieve a sense of both scholarship and accessibility. Here Cornell went on to design fourteen covers and guest-edit four special issues, a task he was well suited to with his amassed store of ballet ephemera and awareness of the discipline formed and developed throughout the 1920s and '30s. Tellingly, he was the sole graphic designer credited by name. Through ballet, we again return to enchantment: from its sixteenth century origins we are presented with an art which sought to mediate between the metaphysical and the concrete.

From 1936 Cornell began to work in the form for which he is best known, the box construction. Here his earlier montage work morphs into three dimensions. Self-contained, these meticulously constructed works are seen by Kwon as a response to a world characterised by chaos and ceaseless social change. During the 1940s "enchantment" brought on by myth came under sustained critical attack from those who saw it as an aid to totalitarianism: Adorno and Horkheimer's Dialectic of Enlightenment is claimed as "the consummate critique of myth's capacity to enchant" (126).

A chapter is devoted to Cornell's muses or "Enchantresses" as Kwon describes them; artistic women were recurring subjects for him. Grace Hartigan, Marianne Moore, Mina Loy, Carolee Schneemann and Yayoi Kusama were amongst his friends. He was particularly struck by the nineteenth century ballet dancer Fanny Cerrito. Indeed, discovering a print of Cerrito by Josef Kriehuber enticed Cornell to collect more Romantic material for his work as well as leading to Portrait of Ondine, an incomplete portfolio attempting to induce an experience akin to that he felt on discovery of Kriehuber's print. Lauren Bacall was the focus for one of Cornell's largest box constructions, Untitled (Penny Arcade Portrait of Lauren Bacall): with reference to Eugène Delacroix's Une sibylle qui montre le rameau d'or, for the artist, an ideal type is pictured within the structure of a game. The work imitates the sound of a film projector when a ball is deposited in its top hatch.

The Ninth Street Exhibition, now considered one of the major moments of Abstract Expressionism's establishment, included work by Cornell. His construction Observatory: Corona Borealis Casement from around this time featured "speckled" Pollock-like elements which are perceived as a kind of dialogue with this movement. Photos of the exhibition showing one of Cornell's constructions in between large paintings by Jack Tworkov and Pollock, go some way to explaining how Cornell's work can sit, if uneasily, with other now canonical work of his time.

Rather than trace the remaining trajectory of Cornell's work to his death in 1972, the author considers three artists; Robert Rauschenberg, Betye Saar and Carolee Schneemann, said to have "engaged Cornell's enchantment" (191). This shift in the book does feel a little arbitrary, but interesting parallels are drawn. A new pursuit of enchantment in the post-war period took hold, seemingly at odds with Cornell's earlier conception, with artists such as John Cage looking to Eastern mysticism and the occult for types of alternative spirituality. For Schneemann, time with Cornell meant departure from a corrupt civilization, and despite his non-feminist view of women, she admired his work and shared in the pursuit of enchantment through the everyday.

Enchantments finds a place alongside other scholarly publications on Cornell, such as (i) Kirsten Hoving's Joseph Cornell and Astronomy: A Case for the Stars [3] in which the astronomical aspects of Cornell's art are considered in light of the Cold War and scientific developments of the period, and (ii) Joseph Cornell: Navigating the Imagination [4] by Lynda Roscoe Hartigan, who offered feedback on the writing of Enchantments.

The impression one receives from this book is of Cornell as a one-man movement, present in the milieu of prominent figures and artists, admired, but at times misunderstood. The modernist project seeking to show us that things can be otherwise is a constant throughout, it just seems that the way Cornell went about it was difficult for some to place. He is charged by the author with allowing colonialist features into his cover design "Americana Fantastica" for View magazine, with the consequence that myth can "flatten difference and further ideology" (126); an interpretation which perhaps tells us more about our own time than his. Living in such a politically charged period, Cornell does not appear to have positioned himself with his more partisan contemporaries, as observed by Perry Anderson:

"Connexions with surrealism were vital in abstract expressionism, and the politics of its leading painters could hardly have been further from their use as a moral affiche for the Free World: Rothko was an anarchist, Motherwell a socialist, and Pollock - in the private opinion of Greenberg, his greatest public champion - nothing less than a 'goddam stalinist from start to finish'". [5]

Drawing on art historians, literary critics, philosophers and other thinkers, Enchantments presents an illuminating image of Cornell, his time, and to a degree, his influence, paying special attention to the significance of enchantment and its absence in twentieth century North America.

[3] Kirsten Hoving: Joseph Cornell and Astronomy. A Case for the Stars, Oxford 2009.