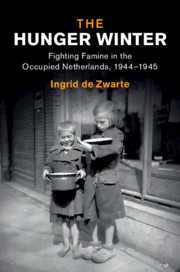 The Hunger Winter, a famine which struck the densely urbanized west of the Netherlands in the final year of the German occupation, remains a focal point of Dutch memory about World War II. Tulip bulb stew, stolen railroad ties, airdrops by Allied planes - these are images nearly all Dutch are familiar with and which are reproduced over and over again, in class rooms, in children's books, even on the silver screen. At least until the 1980s, the Hunger Winter played a larger role in Dutch public imagination than, say, the Holocaust.

Yet outside of the Netherlands, the Hunger Winter remains a rather unknown episode. The last English-language monograph about the topic dates back to the late 1990s [1]. For this reason alone it is laudable that historian Ingrid de Zwarte recently published The Hunger Winter. Fighting Famine in the Occupied Netherlands, 1944-1945 - the English edition (not translation) of the originally Dutch-language book she wrote on the basis of her PhD research. With The Hunger Winter, De Zwarte not only gives international audiences a long-due update on the current state of research about the Dutch famine, she also offers new insights relevant for the entire field of famine research.

The study revolves around two central issues: first, what caused a famine in one of the richest and most developed areas of Europe? And second, how come relatively few people died once calorie intakes dropped to a critical low? De Zwarte starts off with an outline of the historical context of the famine, followed by a detailed, chronological discussion of its causes. She concurs with previous studies that the famine did not result from a lack of production but rather from a collapse of the transportation system. The food situation rapidly deteriorated in September 1944, when the Allies had conquered three major food- and fuel-producing provinces in the south of the Netherlands, but their advance was halted by the failure of Operation Market Garden. The 2,6 million living in the conurbations of the west now had to be fed with food from the eastern provinces, and that's where things went wrong.

In the first postwar decades, De Zwarte shows, researchers mainly ascribed responsibility for the ensuing famine to the German occupiers, who, in order to step up the war effort, confiscated nearly anything with wheels on it - a version of events which is still commonplace in international literature. More recently, Dutch historians have pointed out the averse role of the Dutch government in exile in London, which called for a total railway strike on 17 September 1944, at a moment when the supply system was already crumbling, and, pressured by the Allied command, would not call it off until the very end of the occupation. De Zwarte does not side with either one of these narratives - instead she offers, in her own wording, "a new perspective", which emphasizes the multiplicity of causes. She convincingly argues the famine was produced and, subsequently, aggravated by a chain of German, Dutch and Allied decisions (combined with bad weather conditions). De Zwarte also points out the necessity of differentiating between various individual actors instead of treating groups as monolithic blocks. The German civil administration in the Netherlands, for instance, was much more keen on preventing hunger than the military.

A brief chapter is devoted to the impact of the famine in terms of mortality and health issues. The relatively low number of deaths (an estimated 20.000, plus about 15.000 related deaths) and the quick recovery of fertility after the war lead De Zwarte to classify the Hunger Winter as an "early-stage famine". This classification in turn serves as a framework for the second part of the book, in which she seeks to answer the question of why the Hunger Winter, for all its severity, did not develop into an "extreme-stage" famine. She does so by examining responses to the crisis on four different levels: the German occupational administration, the Allied command, individual citizens, and communities.

De Zwarte's main argument is that this last level - communities - played a crucial role in alleviating the Dutch famine. Famine research has tended to focus on responses on state and individual level, and overlook the vast domain of human interactions in between. Which makes sense to an extent, since the most researched cases - e.g. the Great Famine in Ireland and the Holodomor in Ukraine - saw a total collapse of social structures. But in the Hunger Winter, this was far from the case.

In two meticulously researched chapters, for which she visited numerous local Dutch archives, De Zwarte describes how countless local food distribution initiatives sprang up as soon as the central rations system began to falter. Soup kitchens and medical care were the most prevalent forms, but De Zwarte also takes into consideration so-called intra-company aid, whereby enterprises sent out delegates to the countryside to gather food and fuel for the entire personnel, as well as the widespread schemes to evacuate undernourished children to the rural provinces in the east.

De Zwarte does point out some problematic aspects of these initiatives, most importantly the churches' collective decision to help primarily the needy within their own denominational boundaries. But still, below the line, these community responses were a huge success and proved especially effective in protecting the most vulnerable groups, such as the elderly and diseased, and children. In fact, the low rate of infant mortality is what sets the Hunger Winter apart from other famines more than anything else. De Zwarte goes as far as to call these grassroots relief efforts "the main factor actively reversing the expected effects of the famine." A bold thesis, which she substantiates with ample evidence.

De Zwarte does not aim to present a comprehensive history of the Hunger Winter; she does not dwell much on the ways in which the famine was experienced and remembered, nor on its political impact (e.g. as an impetus for extensive agricultural reforms, whose effects are still tangible today). This is not necessarily a point of criticism - one might as well praise De Zwarte for steering clear of ballast that could get in the way of her argumentation.

Concise and lucid, The Hunger Winter offers compelling arguments for the causal complexity of famines and the significance of community responses in alleviating them. It inevitably raises the question of whether the social factor in other famines is up for reexamination, too - a question which will hopefully be taken up by other researchers.