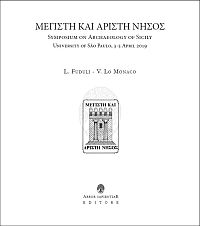 In the past decade, a number of museum exhibitions and associated academic conferences and catalogues have focused on ancient Sicily as the archetypal "crossroads" of the Mediterranean (e.g., Sicily: Art and Invention between Greece and Rome, held at the Getty Museum in 2013; Sicily and the Sea, a traveling exhibit originating at the Allard Pierson Museum in Amsterdam in 2016; and the British Museum's 2016 exhibit Sicily: Culture and Conquest). However, these exhibitions primarily reached audiences in Europe and North America. Moreover, academic discourse on ancient Sicily remains largely "insular," with new research disseminated in Italian-language journals, conference proceedings, and government publications with limited circulation beyond Italy.

Therefore, as the first meeting devoted entirely to the archaeology of Sicily to be held in Brazil (according to its organizers), the 2019 conference whose proceedings are under review had the admirable goals not only of widening the field of scientific enquiry on pre-modern Sicily to include the proto-historical and medieval periods, but also of stimulating research in Brazil, and of disseminating recent archaeological research carried out in Sicily to a Brazilian academic audience (7). Unfortunately, the published conference proceedings will probably do little to further the goal of disseminating research on Sicily to broader international audiences, not least due to a lack of thematic unity and dialogue between the papers and to insufficient editorial oversight, particularly regarding the quality of English translations. Nonetheless, many of the individual papers have much to offer scholars with an interest in the archaeology of Sicily, particularly in the Roman period.

In keeping with the first goal of the conference, the longer papers ("lectures") that comprise the first section of the proceedings embrace a wide chronological range, extending from the archaic period to the middle ages, with four of nine focusing on the Roman Republican and/or imperial period. Three of the papers are in Italian and six are in English, though the quality of the English translations is highly variable. Many of the papers are focused on a single site or on a specific research methodology (e.g., field survey or numismatics), and so may be less accessible and of limited interest to non-specialists. Moreover, few of the papers offer much in the way of new findings or theories, and a large amount of the material presented in them will already be familiar to specialists from the respective authors' previous publications. An exception is Viviana Lo Monaco's study of the relationship between urban centres and hinterlands in central Sicily in the archaic, classical, and Hellenistic periods, which concludes with the intriguing hypothesis that the change in settlement sites from hilltops to lower-elevation locales beginning in the fourth century BC reflects the presence of mercenaries in these settlements, and hence the diminished perceived need for security provided by hilltop locations (23-37, at 29-30). Francesco Muscolino's contribution on Sicily's engagement with the Hellenistic Mediterranean, which draws largely on epigraphic attestations of Sicilians abroad (73-83), and Aurelio Burgio's overview of survey projects on the island (97-110) both provide useful syntheses of recent scholarship. Two papers sound salutary notes of caution about interpreting the material record of Roman Sicily: Monika Trümper's summary and critique of recent scholarship on supposed gymnasia identified in Sicilian cities (47-71), and Lorenzo Campagna's circumspect analysis of the urbanistic changes attendant on the establishment of a Roman colony in Tauromenium (Taormina) under Augustus (85-95).

The conference posters, which are presented as short papers in the second half of the proceedings, are more successful than the lectures in widening the field of enquiry, embracing a chronological range from the Bronze Age to the middle ages. Amongst the thirteen papers are many useful overviews of recent and ongoing archaeological survey projects, including the contributions of Antonio Alfano on surveys in the Jato and Belice valleys (141-146); Rodolfo Brancato on surveys in the Plain of Catania (147-152); and Marina Congiu et al on a newly discovered hilltop settlement in the territory of Butera (159-164). Marco Sfacteria et al provide an update on research at the important Roman-era site of Philosophiana (Sofiana), focusing on the relationship between this settlement and the nearby Roman road running from Catania to Agrigento (173-177). Other papers, such as Giuseppe Guzzetta and Maria Agata Vicari Sottosanti's catalogue of late Roman coin hoards from the area around Syracuse (165-168), offer valuable summaries of materials held in Sicilian museums, some of which remain unpublished.

Overall, the light editorial touch on display throughout volume does little to render the papers accessible to a broader academic audience both individually and as a collection. The lectures are presented in chronological order and the posters in alphabetical order, whereas a thematic organization may have been more helpful to readers, allowing them to draw connections between individual papers. There is no dialogue between the papers themselves. Unsurprisingly, there is a heavy methodological emphasis on numismatic studies, rural surveys, and the archaeology of urban centres, but the editors provide no indication of why particular sites or bodies of material were chosen for presentation in the conference and its published proceedings, or of what their broader significance to the study of ancient Sicily may be. Therefore, while some of the papers will undoubtedly be of interest to specialists, on the whole, the volume represents something of a missed opportunity to make the case for the value of studying pre-modern Sicily (especially in the Roman period) to a broader academic audience beyond Italy.