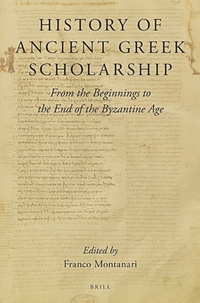 Texts that once played only an ancillary role in modern scholarship on Greek antiquity have in recent decades become the focus of scholarly attention in their own right. Products of Greek scholarship produced before the modern period interest us now not only for what they tell us, but also why, how, and when.

The significant turning-point in the study of ancient scholarship came with the publication of Rudolf Pfeiffer's History of Classical Scholarship, [1] which traced the development of Greek scholarship to the end of the first century BC - understandably but regrettably excluding Greek scholarship of the Roman Imperial and Byzantine periods. The volume under review, an expanded and updated version of the historiographical chapters of Brill's Companion to Ancient Greek Scholarship, [2] represents the culmination of research produced in the wake of Pfeiffer's seminal work and fulfills a desideratum in providing, in a single volume, a history of Greek scholarship from its origins to the end of the Byzantine Empire.

The volume is divided into four chapters, organized chronologically, dealing in turn with the development and character of Greek scholarship in the Archaic and Classical periods; the Hellenistic period; the Imperial era and Late Antiquity; and the Byzantine age. While most chapters are not substantially different from the versions that appeared in 2015, the first chapter is more than twice the length of its previous incarnation.

A brief introduction by Franco Montanari situates the book in modern scholarship and reassesses two questions that have occupied scholars over the last half century: whether Aristotle and his school played a decisive role in the development of Hellenistic scholarship and whether Alexandrian philologists collated texts. Both are answered in the affirmative.

In Chapter One, "The Origins and Growth of Scholarship in Pre-Hellenistic Greece," Anna Novokhatko draws on a diverse array of evidence to provide a comprehensive picture of the developments that paved the way for the scholarship of the Hellenistic period. The first part of the chapter surveys our evidence for the development of the preconditions for scholarship, including the emergence of the alphabet, the expansion of literacy; the production, availability, and circulation of books; the increased role of reading; and the preservation of official editions of literary texts. Novokhatko then traces the social institutions that "provided the essential social framework in which scholarship could flourish" (34), namely formal schools, institutions of higher learning, private book collections, and public archives and libraries. The final part of the chapter gives a detailed account of the earliest evidence for and development of the theories, methodologies, and practices that would come to typify scholarship of the Alexandrian age. Arranged topically, this section covers all (proto-)philological activity from Pherecydes' allegorical exegesis in the 6th century BC to Demetrius of Phalerum's textual criticism in the early 3rd.

In Chapter Two, "Hellenistic Scholarship," Fausto Montana gives an illuminating account of the development of Greek scholarly activity from the late 4th to the late 1st centuries BC. A brief introductory section addresses three issues of fundamental importance to the study of Hellenistic literary culture: (1) the extent to which court poetry and scholarship should be seen as either distinct from or continuous with popular music (Montana emphasizes the elite, exclusive, and bookish nature of literature and scholarship produced within imperial courts); (2) the difficulty of reconstructing Hellenistic scholarship, given the state and nature of the evidence; and (3) the traditional privileging of the connection between poetry and philology, which "was only one aspect of the intellectual productivity officially encouraged and sponsored by the Hellenistic rulers" (141). The second section surveys scholarship produced both outside Alexandria and especially within it from the early 3rd century to the mid-2nd century BC, when a political crisis in Alexandria led to the diaspora of scholars from the capital. In his discussion of the Alexandrian Museum, Montana persuasively highlights the "strong connection [...] between the Peripatus and the Ptolemaic cultural policy" responsible for the foundation and sponsorship of the Museum (150). The chapter's final section discusses the broadened horizons of scholarship in the final two centuries BC, when new cultural centers emerged as rivals to Alexandria.

Chapter Three, "Greek Scholarship in the Imperial Era and Late Antiquity," by Stephanos Matthaios, covers the history of Greek scholarship from the end of the 1st century BC to the beginning of the 6th century CE. The chapter begins with a brief summary of the state of research, emphasizing the relative neglect of the period under consideration, especially by comparison with the Hellenistic age. The second section discusses the development of γραμματική (from 'philology' to 'grammar') and the associated evolution of grammar (from an ancillary aspect of literary interpretation to an autonomous discipline whose purview included, but was not limited to, literary language). As Matthaios demonstrates, the rise of grammar as a scientific discipline corresponds to its institutionalization within the education system, both at the primary level and at higher levels of education, facilitated by the creation of fixed salaried positions throughout the Roman Empire. The prosopographical portion of the chapter considers, in turn, figures and works pertaining to philological, interpretative, and editorial activity, linguistic theory, metrical theory, and lexicography.

In the final chapter, "Scholarship in the Byzantine Empire (529-1453)," Filippomaria Pontani shows that despite periodic setbacks, interest in and scholarly engagement with classical texts never ceased throughout the Byzantine millennium. The chapter begins with Justinian's closing of the Neoplatonic Academy in 529, an early symptom both of the steady decline of "the institutional commitment to the preservation and transmission of the classical heritage" (374) and of the establishment of a cultural atmosphere in which ancient Greek culture was regarded as essentially foreign. Nevertheless, didactic continuity and the sustained emphasis on mastering Attic Greek ensured that engagement with ancient texts continued. The second part of the chapter covers the cultural revival of the 9th and 10th centuries when ancient texts emerged from the Dark Ages, due primarily to the activity of individual members of the learned elite, whose Christian humanism enabled them to study pagan literature alongside Christian texts. After a discussion of key figures of the 11th and 12th centuries, Pontani turns his attention to the period stretching from the Latin occupation of Constantinople, when scholarly activity briefly shifted to Nicaea and other provincial cities, down to the end of the Palaeologan revival. The concluding section outlines the political, cultural, and religious factors that precipitated and accelerated the migration of Greek scholars and scribes to Western Europe over the course of the 15th century.

The most comprehensive treatment of the topic to date, this impressive monument of scholarship is one that all students of ancient Greek scholarship will wish to have on hand.

[1] R. Pfeiffer: History of Classical Scholarship from the Beginnings to the End of the Hellenistic Age, Oxford 1968.