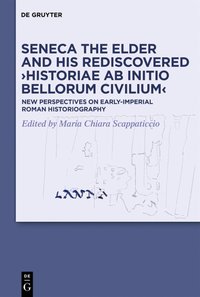 This beautifully produced volume marks a welcome contribution to the renewed debate regarding the historical work of Seneca the Elder and its contribution to those Greek and Latin historical works that have survived from the shipwreck of Classical civilization. The identification of the contents of P.Herc. 1067 is persuasive and, as such, constitutes an important step forward in our recovery of Seneca's lost historical work. It is only to be regretted that not a single coherent sentence (or clause) can be recovered from the fragments of this papyrus. The phrases bello Gall[ico] (Cr. 6 pz. II, sov. 1 + sov. 2 line 5 <7>), [st]uprata mulie[re] (Cr. 2 pz. I, sov. 4 line 5 <15>), [h]oc unum (Cr. 3, pz. I, sov. 8 line 6 <6>), cum hostes (Cr. 4 pz. I, strato 1 line 5 <5>), v[i]r prud[ens] (Cr. 4 pz. I, sov. 2 line 7 <7>), and [ne l]ongius a prop[osito] (Cr. 5 pz. I, sov. 1 col. I line 2 <2>) do not really offer anything that can compare with the two fragments that have survived through indirect transmission thanks to citations by Suetonius and Lactantius. Nonetheless, the identification of this papyrus's contents as belonging to Seneca the Elder's Historiae ab initio bellorum civilium is an important milestone, and this collective volume with its multiple perspectives on the papyrus and the work overall offers useful context not only for specialists, but also for all who are potentially interested in the history of the late Republic and early Principate and the fundamental question of how we know what we think that we know.

The introduction to this volume consists of an overview of the volume's genesis and contents by the editor and a contribution on the state of the scholarship by the general editor of The Fragments of the Roman Historians (= FRHist). With concision and clarity, Scappaticcio begins things by relating both the history of the ERC project that produced this volume and the contents of the fifteen contributions presented here. Cornell follows with a magisterial survey of what is known of the historiography of the transition from late Republic to early Empire and useful methodological reflections on the nature and possible extent of our ignorance of what has been lost. Together these pieces set the stage for a discussion of P.Herc. 1067 and the milieu that witnessed its production and reception.

Part I consists of seven studies that present the text of P.Herc. 1067 and place it alongside other fragments of Seneca's Historiae. Building upon the palaeographical work of Robert Marichal a half-century ago and re-interpreting the book's subscriptio, Piano provides a detailed reporting of the text and persuasively establishes its identity. Dorandi next offers a palaeographical review that highlights this book as a product of the middle of the first century AD and explores its relationship to the rest of the Latin library of the Villa of the Papyri. The following contribution by Scappaticcio proposes a bold, attractive interpretation that the papyrus contains that portion of Seneca's work dealing with the principate of Tiberius towards AD 20-23. In two contributions that are complementary, Mazzoli and Berti explore how Seneca the Elder's work provided a model for the works of Lucan and Florus, arguing that the phrase unde primum veritas retro abiit must refer to the events of 133 BC. Next comes a contribution by Damon. Building upon the solid philological and historical work of Barbara Levick (FRHist) and uniting rigor with speculation, she seeks further echoes of Seneca's lost work in Suetonius' biography of Tiberius. Concluding the first part are a piece that was composed (but never published) by Sussman in 1972 and an accompanying note by Santorelli providing additional bibliography. Discussing at length the genesis, content, and tenor of Seneca's Historiae, Sussman offers ideas on how the shape of this work may perhaps be recovered in part from that of Appian.

Part II consists of seven studies that serve to locate Seneca's Historiae within its cultural and political context. Oakley starts this series in exemplary fashion with a detailed survey of the prose style of Velleius Paterculus and other historians known to have written in Latin during the early Principate. Devillers explores the question of the sources of Tacitus for the early Principate and tentatively identifies a moment in the reign of Tiberius where Seneca's influence may perhaps be perceived. De Vivo continues this line of inquiry, building upon the historical exegesis of P.Herc. 1067 offered by Scappaticcio and reconstructing what we can infer as regards Seneca the Elder's stance regarding the contentious, central figure of Germanicus. Pivoting on the theme of tyranny, Pistellato suggestively argues that the presence of a copy of Seneca's Historiae within the library of the villa of the Pisones at Herculaneum is related to the two families' position regarding tyrants. Turning to the question of intellectual continuity between father and son, Torre next examines appraisal of Papirius Fabianus as a speaker, philosopher, and historian by Seneca the Elder and Seneca the Younger. Rende follows with a paper dedicated to the treatment of the concept of aetas in the work of Seneca the Elder and Florus, arguing that the evidence points to Seneca's Historiae having begun with the year 133 BC. In triumphal manner, Rich concludes this series by offering a magisterial review of the question of the influence of Seneca's Historiae on subsequent historians of the transition from the late Republic to the Principate.

Whether or not one agrees with various contributors that the Ab initio bellorum civilium commenced in 133 BC or prefers a commencement in 49 BC, contributors' investigations from a variety of perspectives of the similarities, possible debts, and differences between Seneca the Elder and later authors dealing with the transition from the Republic to the Empire (esp. Florus and Appian) make for an appealing and extremely useful volume. Indeed, one of the many welcome aspects of this volume is the fact that contributors are in dialogue with one another, offering solutions that often stand in unresolved contradiction and thereby highlighting just how much scope for debate there is. One item that seems to have escaped all contributors is an arguable use of Seneca made by Appian in his account of the senatorial debate and what to do in response to the Catilinarian conspiracy (App. B Civ. 2.5.19). The speech attributed to Ti. Claudius Nero (PW 253) is without a precise parallel and best explained as owing to Seneca's writing his history of Rome during the principate of that man's grandson Tiberius Caesar. It is to be hoped that further fragments of the lost work of Seneca the Elder and other historians of the civil wars of the late Republic may yet be recovered from the Latin library of the Villa of the Papyri at Herculaneum. In the meantime, however, this volume provides much food for thought and a welcome stimulus to revisit the topic.