Peter Linehan: At the Edge of Reformation. Iberia before the Black Death, Oxford: Oxford University Press 2019 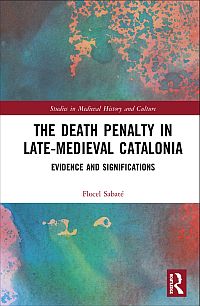 A search online for something like "medieval capital punishment" will bring into view a great number of deceptive sites. They suggest that we all are agog about the medieval history of punishment, although their real interest is often to click-bait viewers with macabre and titillating accounts of the tools and techniques of torture. That media stream operates fully apart from research on capital punishment in academic circles, which take in a range of debates about: the philosophies and theologies of medieval regimes of punishment; the Roman and other cultural and legal influences on punishment, deterrence, and atonement; execution as a tool of Christianization and statecraft; the ritual elements of mutilation and display of dead bodies; the relationship of the medieval past to present use of the death penalty in the US, Saudi Arabia, and elsewhere. Despite the apparent chasm, the popular and the professional share at least two points of interest. At the intersection of internet banalities and academic insights is, first, the recognition that punishments and executions did and do play as public performance and spectacle, and, second, that capital punishment is a special kind of violence that thrives on inequities in the distribution of power.

The Death Penalty in Late-Medieval Catalonia emerges energetically from within and then goes beyond this context. It points squarely at the problems of power and performance without exploiting the grotesque and without choking in the thickest weeds of theory and argument. The author has little interest in recalling the intimate details by which human bodies get broken, torn, cut, and burned. He brings clarity to points of scholarly debates, but he does so without diverging from an intensely micro-historical examination of the evidence of the use of gallows in the one place where abundant archival sources permit us to see universal changes unfold locally.

Over the course of eighteen carefully constructed chapters, Flocel Sabaté shows us that the authorities capable of determining and punishing capital offenses in late medieval Catalonia, while at least a little concerned with punishment as a social good, used the gallows as tools in their jurisdictional gambits.

An introductory chapter posits the late medieval contingencies in a historical continuum running from the early Middle Ages through to the present. It also outlines the essential planks in an argument presented in detail over the remaining chapters. The second, third, and fourth chapters investigate the emergence of legal conceptions of jurisdiction and the implications of practical jurisdictional contests. Among the most salient points are the following: The breakdown of Carolingian administration left a legacy of multiple and contested jurisdictions and contending powerbrokers. The reemergence and fortification of Roman law into the eleventh and twelfth centuries enabled the Count of Barcelona to claim a degree of sovereignty, but efforts by the sovereign to consolidate power clashed with the powers of the nobility and municipal leaders. The Corts of 1283 corroborated the persistence of the jurisdictional mosaic when the count-king promised to respect the rights of others who claimed jurisdiction over and within various Catalan counties. By 1392 it was still the case that the sovereign directly controlled only 13.43% of the territory and 22.17% of the population of Catalonia. The records separating mixtum imperium from merum imperium make a distinction that in theory might have amplified the power of the prince but in practice extended negotiations and fights about the roles of tradition and precedent in determining who could exercise jurisdiction in any particular circumstance.

The fourth chapter illustrates the depth and breadth of the jurisdictional mosaic by examining how the various contenders employed the gallows to full symbolic effect in claiming and defending their rights. Chapters five through seven look in turn at royal, baronial, and municipal jurisdictions. Each exploited the opportunities available for demonstrating exclusive rights or, when necessary, coming to terms with shared jurisdictional powers. Chapter eight brings attention to the practice of ordinary justice. Here we see that the three jurisdictional spheres increasingly drew upon a common arsenal of legal tools - texts and procedures, lawyers and judges, etc.

Chapter nine examines what crimes merited capital punishment under what conditions and given which jurisdictional dynamics. When need arose, for instance at the height of attacks upon the Jewish residents of Barcelona in 1391, the king's men could impose and carry out executions swiftly. Judgment was not arbitrary - the king's men had to follow rules and procedures, but expeditious killing of a few served to intimidate and admonish the living. The procedural norms of ordinary justice for death sentences could prevail across a range of crimes including murder, sexual relations between Christians and non-Christians, homosexuality, heresy, blasphemy, lese-majesty, counterfeiting, and more. Considerations include the means of death, the slowness or quickness of the process, the degree of humiliation of the person, the body, the family, the community. The interplay of these factors could be tempered or exacerbated depending on the social position of the convict. Barons and other social leaders might be fortunate enough to suffer less than others, for instance by having their throats cut before additional post mortem attacks on their bodies. Jews might be hanged upside down to extend the time of their agonies. The rich sometimes avoided one jurisdiction, usually the king's, by fleeing to another or by paying a tribute for safe conduct and protection. That the king sometimes commuted a sentence or pardoned a condemned person raises a number of concerns. Vivid anecdotes and statistics pepper the chapter.

Chapters ten through sixteen read as detailed extensions of earlier threads of argument. Chapters ten through twelve investigate in turn the ceremonial aspects of execution, the display of the body, and death by fire. Thirteen examines inquisitional processes in the monitoring of crimes against the Divine will. Fourteen surveys evidence of the death penalty applied to Jews and Muslims. Chapters fifteen and sixteen consider whether and how executions played upon the medieval mind and constructed social cohesion.

Chapter seventeen examines how war, economic instability, and social disorder at the end of the Middle Ages changed the nature of the longstanding contests over who could employ rights to kill. The circumstances of the tense fifteenth century led at times to royal officials carrying out executions beyond what legal frameworks permitted. Leaders of municipal councils and other institutions, who in earlier centuries had found ways to compromise, increasingly used executions as tools in their own petty grievances and political disagreements. In overtly politicized executions, rivals might see the king's hand as either weakened or strengthened. Shifts occurred in the percentage of individuals from various social groups suffering execution. Sentencing and executions became more theatrical as terror and other messaging became most important.

The Death Penalty in Late-Medieval Catalonia has its origins in seminars delivered by the author at John Hopkins University in 2008. Flocel Sabaté was at that point already an expert in the developments of power, identity, law, and emotion in medieval Catalonia. That this book is published only now is a testament to the fruit that can come from a patient approach to careful research, and it shows how letting an investigation mature over many years can lead to well-crafted arguments richly set in context and demonstrated in evidence. Notes are plentiful, although researchers will bemoan the absence of a bibliography. The author offers both an index of images and a standard index to terms and persons.

Capital punishment was one of the many highly contested jurisdictional, institutional, and infrastructural arenas that shaped places like Catalonia in late-medieval Europe. As these arenas of influence and political practice grew more centralized and bureaucratic, they became tools in the construction of what would ultimately become powerful early modern sovereign states and, later, modern nation states. Catalonia, ultimately, did not become a nation state. Spain subsumed the region, and then became one of Europe's chief weaponizers of force, including lethal force, upon its population. This book, although remarkably tightly focused on Catalonia, helps us to see why nation states have at times been so adept at killing their own, taking advantage of the opportunities that emerge or can be invented at moments of heightened political disorder and social distress.