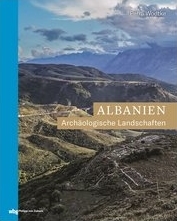 Authors who decide to write guide books must address two questions: the size of the book and the size of the descriptions. In our case the author states in the introduction that she does not pretend to be a classical guide, but to offer insights about the archaeology of Albania. That's why we have a wide size, 30x24 cm, with 144 pages, which means a difficult use during a trip.

The book starts with an introduction which defines the rationale for such a publication and the purposes of it, and continues with several short passages. Such introductory notes are quite useful for the readers, as is the explanation that the focus of the book is on the period between 700 BC - AD 300, which clearly explains the reason why several important archaeological sites of the country are not present in the book. However, more attention on some important details is warranted. For example, it is stated that the Latin alphabet was introduced generally in the early 1920's (7), when in November 1908 (Congress of Monastir, modern Bitola, Northern Macedonia), for the writing of the Albanian language the widely used Latin alphabet would be selected as the standard one.

The guide is partitioned based on geographic division of the country: from middle Albania to the North; the southern part of central Albania; Southern Albania; the valley of the Drinos river; and south-eastern Albania. Using the geography as opposed to something like chronology, is a good option. However, the guide is then represented as a personal visit starting from the Tirana airport. What about those main group of tourists who prefer to visit Albania with their own cars entering from one of the land borders or coming by ferry? Probably, being written in German was thought that the readers may enter the country only via airport.

In the chapter "From Middle Albania to North" are mentioned smaller ancient settlements, even though they are rarely advertised or visited, which I do considered quite important and commendable. The sites of Tirana are limited to those who are on the main avenue "Dëshmorët e Kombit". Unfortunately, it seems that the author has concentrated her attention only on that avenue. One of the most important sites, and the only one of its kind, the late antique villa with polychrome mosaics, is not mentioned at all.

Next, the guide discusses Durrës, the second most important city of Albania. For the late antique forum erroneously, the author declares that mostly the architectonic elements that are visible were spolie, meanwhile it is the opposite. It is really nice for the author to dedicate quite a long description to one of the rescue archaeology discoveries. Even though it is not preserved and just few square meters are visible, the text here is quite large in comparisons with the few lines written for the city fortifications, which are the most important monument in the city. These walls represent the life of the city itself and I feel should have been more thoroughly discussed.

The historical recites and the monumental descriptions in the chapter are nicely intertwined with modern information. It closes with brief information about the Albanians Alps and the smaller site of Gajtan.

The chapter "The Southern part of the Middle Albania" is characterised by a lengthy description of a long list of ancient settlements, together with some short notices about modern cities. The reason for this format lies in the high number of ancient settlements located in this region and because knowledge on some of these settlements is more extensive compared to other sites in Albania. The author has inserted some supplementary description relating to the modern geography (sometimes with a few orthographic errors). The descriptions of the ancient sites are accompanied with some historical accounts to give better insight. In this part of the book, the author underlines the difficulty in clearly delineating Illyrian culture from ancient Greek culture, and a certain bias towards the Albanian archaeology is perceptible.

Another city widely described is Byllis, with all its main structures and with historical short notices. In this case, the author rightly underlines the question marks connected with some interpretations given by the archaeologists to several structures, where the most problematic is related to the so-called stadium. Much shorter are the descriptions of other sites. The archaeological research in these ancient cities are not much developed, but still there is information published in the Albanian language that may have been used.

The chapter "The Southern Albania" begins with a geographical description of the territory and advices on the paths to undertake. The main part of the chapter is taken up by the descriptions of two ancient cities, Buthrotum and Phonike. A lengthy narrative of Buthrotum and its most important monuments, from different chronological periods is quite well presented, except for one case. The so-called Venetian triangular fortification as a matter of fact is Ottoman (the publication of P. Xhufi, 2016, gives Venetian documents indicating that the Ottomans built this fort). Phoinike is given by the author quite detailed, but once more a small element had to be avoided, like the use of "italienischen Ausgräbern". This can be considered quite an offense to the Albanian archaeologists, looking that the excavations are a collaboration between the Albanian Institute of Archaeology and the University of Bologna with mixed teams. The chapter closes with a description of the beautiful church of Mesopotam, associated at the end with a small, funny bit of advice on how to get the keys to enter.

The short chapter "The Valley of Drino River" starts with a geographic and economic description, including orientation on how to travel from the Jonian coast. The author gives descriptions of several small sites and large cities of antiquity or modern ones. In the case of Gjirokastra, a general description was needed, even though it certainly overcomes the chronological limits the author has self-imposed. The city is one of the most important and beautiful of southern Albania, with its traditional and characteristic architecture of houses and cobblestone streets (older than the 70's as the author writes, p. 113, when they were largely repaired; for a great description of them see the autobiographical book of the world-famous Albanian author Ismail Kadare). Between the lines of descriptions dedicated to archaeological sites, the author has inserted some interesting information regarding the history of religion in modern Albania, which makes the text charming to read.

The last chapter of this guide, "The South-eastern Albania," dedicates its attention to a large swath of territory, starting from central Albania and going toward southeast. The author has inserted her a large description of the ancient Via Egnatia. The reason is quite logical, looking that the best preserved parts of it are in the territory from Elbasan to Përrenjas, here described. Selca e Poshtëme is another ancient site that is well described with its monumental graves carved in rocks. These particular monuments have pushed the author to give also a short analysis of their meaning and implications.

The book is closed by a short, selected bibliography, which may serve as an introduction for more in-depth reading on the country.

The author has done quite good work selecting the most important settlements within the chosen chronological limits with the main information on them. For this the author should be congratulated. However, there are some questions that have to be mentioned. First of all, the lack of maps for the ancient settlements is noticeable. There are descriptions of the way to move within the sites, or explains the orientation of the main monuments but they remain vague without maps, and the reader is left to find the orientation by themselves. The pictures of the most important monuments that can be helpful, but this brings us to the starting point: the guide can't be read during a trip, given the size of the book.

Another important question is the omission of the whole north-eastern part of Albania and its patrimony. Certainly, there are not such great settlements as Dyrrachium or Apollonia, but this does not justify a complete lack of description.

Additionally, the repetitive expressions related to political will interfering in Albanian archaeological research and interpretation (it has become a "rule" amongst western archaeologists to notify the reader about the politicization of past archaeological efforts and how they have impacted modern archaeological pursuits in Albania), and in some cases of partial reconstructions of ancient structures, seems to overestimate these problems (don't western countries also make reconstructions of their architectonical patrimony?!). This view seems to be accompanied with a certain bias towards Albanian research, which is visible when putting within quotation marks words that identify Illyrian kings or queens, fortifications etc.

Considering all of the questions mentioned above, I believe that the author has made use mostly of the bibliography that is available in German, English or French, which restricts considerably the view of the country. It is not possible to have a deep view of the whole country, as is needed by a guide, without incorporating the Albanian literature.

In the end, I may say that the author has made quite an effort to bring a general image of Albania, which is quite welcomed, and I do see this guide as a good introduction for not professionals on the archaeology of Albania. I hope it will inspire readers to learn even more about Albania's unique history.