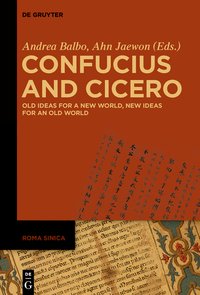 This collection of essays undertakes a comparison of the accomplishments, ideas and legacies of Confucius in later Zhou China and Cicero in late Republican Rome. In the end, it delivers less than the title promises, but there is still much interesting material here. Space limitations make it impossible to discuss all eleven essays, so I will concentrate on the essays with the most stimulating comparative approaches.

Key, in terms of the promise of the book, is the opening piece by Fritz-Heiner Mutschler. He recently edited The Homeric Epics and the Chinese Book of Songs: Foundational Texts Compared (2018), a collection of essays that compare two texts fundamental to the development of their civilizations - Homer's Iliad and Odyssey and the Chinese Book of Songs. In reviewing that volume, my initial skepticism about the comparability of the texts was in large part overcome by the many intriguing angles of comparison employed by the contributing scholars. No surprise, then, that Mutschler tackles the fundamental question of how really comparable these two figures are. In "Comparing Confucius and Cicero: Problems and Possibilities," he first asks "whether Confucius and Cicero ... are representative for the 'cultural worlds' to which they belong." (9)

Mutschler points out that we have nothing written by Confucius - the Analects, Chinese Lunyu, were compiled by later followers, and not everything they say may reflect his true teachings; whereas we have extensive writings from Cicero, including court and political speeches, rhetorical and philosophical treatises, and personal letters. He notes that, whereas Confucius' ideas are drawn internally from Chinese tradition, Cicero was heavily influenced by Greek philosophy. While the ethical virtues that each thinker promotes appear to have many similarities, Mutschler notes, in comparing Confucian ren with Ciceronian humanitas, that ren is the most important and most frequently cited ethical term in Lunyu, whereas humanitas "is only of limited importance in [Cicero's late philosophical work] De officiis." (17) And whereas ren, in both its narrower sense of "loving other humans" and its more general meaning of "humaneness," is a purely ethical notion, humanitas has multiple, interrelated meanings of humaneness (close to the sense of Confucian ren), friendliness, and education. As for the impression Confucius and Cicero made on contemporaries and posterity, Confucius comes across in the tradition as a calm and unperturbed sage, whereas Cicero was ambitious, vain, insecure and emotionally volatile. Once the Han dynasty adopted Confucianism as its official ideology in the later second century BCE, the perceived personality of Confucius had influenced scholar-administrators for two millennia (a fact made possible by the relative continuity of Chinese political institutions), whereas Cicero, whose ultimate failure was well-known, was less successful as a role model. Mutschler concludes: "The comparison between Confucius and Cicero is not without pitfalls, but if it is done with circumspection and caution towards hasty conclusions, it can teach us much, not only about the two individuals but also about the two cultures to which they belong." (25)

Jaewon Ahn, "Is Confucius a Sinicus Cicero?," considers the 17th century Latin text titled Confucius Sinarum Philosophus sive Scientia Sinensis, an overview of Chinese and European views on Chinese thought and philosophy as well as translations of classic texts. Ahn gives the example of zhongyong (the golden mean), observing that the Chinese concept is similar to Cicero's idea of duty (officium), and that the translator, utilizing Latin terminology taken from Cicero and Stoic philosophy, tried to equate the cardinal virtues of Chinese and Romans.

Kihoon Kim, "Pietas in pro Sextio Roscio of Cicero and Confucian 孝 (xiao)," focuses on a speech in a trial for parricide (murder of one's father). For Romans pietas was the proper attitude of respect, reverence and obedience to parents, country and the gods. Kim emphasizes the similarities between Roman pietas and Chinese xiao (filial piety), and explores the connotations of xiao in the Xiaojing, a dialogue between Confucius and a disciple composed several centuries after the Master's death.

Tongdong Bai, "The Private and the Public in the Republic and in the Analects," involves a comparison, not of Cicero, but of Plato with Confucius. Graham Parkes, "Confucian and Daoist, Stoic and Epicurean. Some Parallels in ways of Living," compares the teachings of these Chinese and Greek belief systems about the nature of the good life. Other essays do not attempt comparisons of Chinese and Roman thinkers. While they delve deeply into the meanings of important Chinese and Roman concepts, insofar as they are less pertinent to the avowed aims of the volume, I simply list the titles: Michele Ferrero, "The Latin translations of Confucius' Dialogues (Lun Yu). A comparison of key concepts;" Jungsam Yum, "Mind, Heaven, and Ritual in the Xunzi;" Christian Hogel, "Humanitas: Universalism, equivocation, and basic criterion;" Stephane Mercier, "Becoming human(e): Confucius' Way to ren and the Initiation of Christ in Yi Byeok's Essence of Sacred Doctrine;" and Stefania Stafutti, "'Be modest and avoid wastefulness': table manners and beyond from Confucius to Xi Jinping."

The final essay, like the first, engages directly with the central theme of the book. In "Cicero and Confucius: Similitude in Disguise," Yasunari Takada contends that there are many similarities between these two seminal figures, including "their lifelong interest in politics and philosophy as well as in the ultimate failure of their respective political ambitions," and "they are alike in leaving, each in his own way, a great influence on posterity." (189). But a closer look reveals significant dissimilarities: one left no writings, the other wrote voluminously; they lived and operated in very different historical milieus; one was the founder of a great and long-lasting tradition, the other more a "transmitter and modifier of [Greek] tradition." (189) In the end, Takada argues, "any comparison of Cicero and Confucius needs to place them in their proper cultural contexts, which could only highlight their dissimilitude." (189)

Cicero had access to the intellectual achievements of Greek civilization, whereas no equivalent foreign cultural influence existed in Confucius's China. Cicero was actively engaged in Roman politics at the highest level, whereas Confucius failed to obtain office for long. Cicero spent his last years disillusioned and in political retirement, and in the end fell victim to the Roman civil wars. Confucius spent his last years peacefully, perhaps editing a number of venerated classic texts and training a circle of disciples. Cicero's pagan philosophy was replaced by Christian theology in the Middle Ages, and Cicero is probably best known for his oratorical skills. Takada concludes: "In short, the history of China, and for that matter the entire history of East Asia is inconceivable without Confucius. It is not necessarily the case that the history of Rome, or for that matter the entire history of Western Europe, would be inconceivable without Cicero." (195)

In the end, comparative work of this sort highlights what is distinctive about each society and can lead to deeper understandings of familiar concepts. Seen that way, this volume provides some fine examples. But it also illustrates how certain comparisons only get you so far.