Richard Cole: The Death of Tidericus the Organist 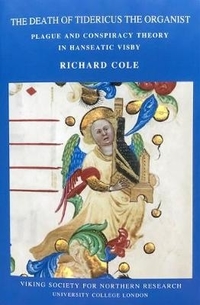 MS SLUB Dresd. A 59 (c. 1434) contains Paul of Burgos's Scrutinium scripturarum, Samuel of Fez's Epistola Discrepantie fidei nostrae et iudeorum (anon.), and a copy of two letters (A and B) from 1350 about killings by poisoners in Prussia, Courland, Sweden and Gotland, for which Jews and their accomplices are blamed. Within a Scandinavian context, the letters and their charges are unique. No mention of the perpetrators, accusations, arrests, or executions can be found elsewhere. They provide what appears to be a rare insight into the role of anti-Jewish conspiracy during the plague in the North. Over the past 175 years, four editions of the letters, a translation into Swedish (Letter B), and at least 15 articles about them have been published.

Richard Cole has previously written on "the Jew" in West Norse literature and now turns his sights to Gotland, Latin, and the letters in A 59. His book provides an edition, translation, and fresh interpretation focusing on the poisoner Tidericus that relates the events to a state of social unrest on Gotland. While I have found his earlier articles to be innovative and thought-provoking, I was left disappointed by this book.

The presentation of previous research is incomplete, e.g. Herschel "Archivar, in Dresden", Eduard Pabst, Jürgen H. Ibs and editions in Anzeiger für Kunde der deutschen Vorzeit (1860) and Mecklenburgisches Urkundenbuch (1877) are missing (2-3). The most significant distortion is the rather short shrift given to Ulrich Simon's laudable article from 2010 that convincingly argues the letters were fabricated in Lübeck with the aim of ridding the League of its competitors by destroying their source of credit. Cole interprets the letters and their aim quite differently. His argument would have benefitted from explaining why he has discounted Simon's findings.

Cole includes a good section on terminology for Jew-hatred (4-11). His discussion of transmission and earlier characterizations of antisemitism in Scandinavia as "imported goods from abroad" is very relevant. For his analysis, Cole opts for J.-P. Sartre's 80-year-old theory of antisemitism that is "flawed," "not perfect," and "drawn from a period very different from the Middle Ages," but "can be extended in a very useful way." According to Cole's "modified Sartrean interpretation" antisemites blame Jews for their problems because "they dare not reckon with the complexity of the real cause of their problems, and the dramatic, painful solutions they may require," and "they prefer to pick a pointless battle against a vulnerable enemy rather than picking a productive battle against a strong enemy". This does not shed light on the burning question "why the Jews"? It makes antisemitism no different to blaming any other powerless "othered" group and I have difficulty grasping its analytical value. As blaming Jews in the Middle Ages is equated with blaming other groups through history (77), what is particular about antisemitism? The interpretation also comes unstuck explaining why blame fell not only on the vulnerable enemy (Jews), but also on merchants, men in high office, and clergymen "throughout the world". Surely they are not vulnerable or weak? The entirely functionalist interpretation of the Visby case means that the antisemitic conspiracy was not so much a matter of deep-held belief, but rather one of expediency on the part of the city élite.

Cole writes that the idea that the events in the letters did not take place can "be discredited at the outset ... to fabricate events as dramatic as these would be a very grave risk for any career-minded Hanseatic councillor" (13). He seems to be suggesting that we need not preoccupy ourselves with source criticism and question the veracity of statements in the letters because Hanseatic administrators would only have documented the truth. He treats the prisoners and burnings in the letters as historical fact and sees the whole case as a set-up by the Visby councillors. Placing the events within the context of social unrest between the "disenfranchized" Gutnish-speaking "proletariat" and the "rational, educated" German-speaking "mercantile élite", he tries to show how they aimed to divert the threat of violence at the hands of the native Gotlanders away from the German-speaking population. To demonstrate that the charge was invented by the Visby councillors to placate "the ordinary, lower-class people of Visby", Cole claims Hansards were "rational, educated people," who would have had difficulty "to convince themselves that they were really under attack from a conspiracy" (48). This is an extraordinary claim. The overarching thesis rests on little evidence, much speculation, and curious ideas about the character of Hansards, about "natural appeal for the German-Visbyer Weltanschauung" (43), and about what the Gutnish-speaking population might find "plausible". In places, these claims verge on pop psychology, while drawing parallels to modern times (e.g. 10, 46, 63, 66) and referring to Visby's Gutnish-speakers as "Lumpenproletariat" (21) does not make things clearer. This insistence that the copy of letters in A 57 reflect real events - without providing evidence for this or exploring other possibilities - is the greatest weakness in Cole's interpretation.

Cole places the events within a conflict between the Gutnish-speaking countryside and Visby, where, we are told, there was also friction as Gutnish-speakers had to submit "to an administration with which they did not identify, and which had little interest in their well-being" (23) and where life "must at times have felt like what today we would recognise as a colonial experience". Yet, as Cole himself notes, "sources record no disturbances or grumblings against Hanseatic rule" during the Black Death or in its immediate aftermath (77). He sees this as a vindication of his theory: "[i]nstead of seeking intervention from their kinsmen in the countryside, it would seem that the Gutnish-speaking Visbyers accepted the outlandish fantasy put before them". But as there is no evidence of a looming rebellion or of concerns about how to quell one, this conclusion seems to be based solely on absence of evidence to the contrary.

Language is mentioned repeatedly and I do not understand why. The administration in much of medieval Europe used another language than the majority population; e.g. the élite in Stockholm was multilingual and many inhabitants at least bilingual. There is no evidence of urban conflict based on language in medieval Scandinavia. This exaggerated ethnocentric interpretation of the League, "part of a greater deutschprachig cultural and political entity" (43), turns the historiographical clock back to Fritz Rörig. Recent scholarship has worked hard to characterize the League as a voluntary association of city states with a significant and varied role for cultural transfer rather than as an aggressive player in power politics and ethnic conflict.

The edition is just not up to scratch. We find, e.g.: "intoxicatoines" for "intoxicacionis" (the abbreviation stroke used is typical); "tractatasset" for "tractasset"; "conuenentes" for "conuenientes"; "imprimartis" for "imprimatis"; "omnis" (several times) for "omnes"; "conseruunt uobis" for "conseruet nobis"; and confusion between 'i' and 'j' and between 'u' and 'v', which are all clearly differentiated by the scribe (e.g. "urowenborch" for "vro-|wenborch"). Abbreviations are expanded, although inexplicably 'xp' is not: we find "xp," "xpr," and "Xrist". Some ink marks have been interpreted as diacritics creating new letters, but Cole has chosen not to reproduce "the German ß for s or ss" (81) - probably just as well as there are not any. Emendations are at times surprising (e.g. 84n26 makes no sense; cf. Simon 137). The sections of Old Swedish text are quoted from often outdated editions that do not meet today's standards: abbreviations, except 'z', are expanded silently and the modern typographical characters 'ä' and 'ö' are used. This is not usual practice in East Norse philology today.

The translation is wrong in many places with consequences for the book's arguments. Key-points are misunderstood: the date of Tidericus's execution ('On the Saint's Day of Martinian and Processus, i.e. 2nd July 1350' for "in profesto sanctorum processi et martiniani" [on the day before...]); the identification of two German towns ('Baden' for "pattensem" [Pattensen], incorrectly transcribed as "patensem"; 'Berne' for "peyne" [Peine]); various time expressions ('over Easter' for "a pascha hucvsque" [from Easter until now]; 'three or four days later' for "tercia die ... aut quarta" [two or three days later]). The Hanseatic term advocatus [i.e. voget] is interpreted as 'go-between' and societas [i.e. geselschop] as 'certain society.' Entire sentences are wrong (e.g. 'To all who read or hear this letter, please send the councillors of Rostock our sincere friendship and goodwill, and convey our deference' for "Uniuersis presencia visuris seu audituris Consules in Rostok sincere dilectionis constanciam cum prompto famulatu"). Even larger sections of Latin have also been misunderstood; the final twelve lines of Letter A ("petimus omni diligencia ... Cristus vos conseruet") translated as 'we beg for all diligence ... God save you!' (94) serve as a good example. Translations from OSw. are also inadequate, e.g. one short text (61-62) has 'a strange colloquium' for "ena märklika samqwämdh" [a remarkable gathering]; 'Then the priest called out' for "Tha framropadhes prästen" [Then the priest was called forward]; 'as a wolf howls' for "som en wargha hoper" [like a pack of wolves]; 'saying that he should be near her' for "sighiandis sik henne wara när skyldher" [saying that he was closely related to her]; 'doctors' for "doctores" [scholars, theologians]. The lengthy discussion of villa 'error, delusion' is due solely to its mistranslation as 'heresy' (62n11).

The letters are not examined within their manuscript context. As the only piece of evidence remaining, A 59 is surely crucial to our sense of how these documents and the story of Tidericus were understood and came to be used. What does the manuscript itself contribute to our understanding of the texts and their writers, environment, and purpose? The other three works in A 59 are mentioned cursorily and we read that the "letters were copied in a somewhat unusual place" (76). However, looking at the manuscript as a collection of anti-Jewish polemic, we could just as well say this tale of a Jewish plot to destroy Christendom has been included in a rather apt place and provides domestic "evidence" for an alleged truly international problem.