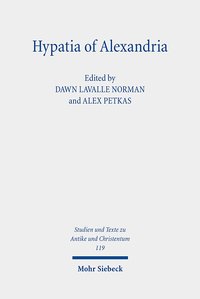 This volume has its origin in part in a conference held in 2015 at Princeton University and proposes papers by various scholars concerning the late 4th/early 5th century female philosopher who taught in Alexandria in Egypt, Hypatia. Hypatia has become the object of considerable interest in recent studies. [1] Her tragic figure, a pagan woman philosopher lynched by Christians in Alexandria in 415, has attracted attention well beyond academic circles, as for example in Amenábar's film Agora, and appeals to current interest in woman in the history of philosophy and in gender studies. Women seemed to have found space, as intellectuals, in ancient schools of philosophy of Platonic and Pythagorean inspiration. We find them there as students and also as teachers. A much-admired predecessor of Hypatia, belonging to the second generation of schools inspired by Iamblichus, was Sosipatra, who taught in Pergamon and whose son Antoninos moved to Egypt. These philosophical schools had not forgotten Plato's claim that women can have capacities for virtue and knowledge equal to those of men (Republic 455d-457a). Already in Late Antiquity, Hypatia became the object of conflicting ideological representations. Damascius, a pagan philosopher of the late 5th/early 6th century, alludes with the story of her murder in Alexandria to the great shame which (classical) Athens inflicted on itself in condemning Socrates to die. Christian authors who reported on the death of Hypatia, in particular Socrates Scholasticus and John of Nikiu, made her murder serve divergent polemical purposes. Facilitating this instrumentalization of Hypatia, both in Antiquity and in the modern period, is the almost total loss of works written by her.

It seems that the nearest we can come to a sympathetic witness to Hypatia and her philosophy is the work of her devoted student Synesius of Cyrene. A first section of the present work is devoted to the relation between Hypatia and Synesius, a section including papers by A. Petkas, H. Seng and H. Harich-Schwarzbauer. Petkas discusses some texts of Synesius in relation to the position that they bear on Hypatia's relation to a debate "about the status of classical literary culture in a Christian dominated Alexandria" (9), with reference in particular to different Christian (in particular monastic) currents in the city. Seng surveys references to Hypatia in Synesius' works (including his letters), arranged in chronological groups. Seng notes Synesius' great respect for his teacher, who was, for him a "living symbol of philosophy" (49). Harich-Schwarzbauer argues for Synesius' letters as being a unified literary corpus in which Hypatia has a literary role, in relation to this referring to her reception in novels by Fritz Mauthner (Hypatia, 1892) and Umberto Eco (Baudolino). However, little that is substantial concerning Hypatia's philosophy emerges from these papers. A second section of the present volume concerns the historical context of Hypatia's life and death. The relation with Bishop Cyril of Alexandria, accused in ancient sources of inciting her murder, is discussed (W. Beers), as are the various representations in ancient historians of the murder (M. Haase), an interesting paper which compares the accounts of the destruction of sacred statues, in particular that of Serapis in Alexandria, with that of a person, Hypatia. A further paper (by D. Frankfurter) deals in a more general way with "the private devotions of intellectual Hellenes" and a last paper (by S. Gertz) deals with Hypatia in the context of "Alexandrian Neoplatonism" (I return to this paper below). The third and final section of the present book concerns the ancient and modern reception of the figure of Hypatia. J. Fisher suggests what he calls "literary consonances" with Hypatia to be found in Nonnus of Panopolis' Dionysiaca (Book 41). V. Leonard discusses a story told about Hypatia in Damascius' Vita Isidori, according to which Hypatia put an end to a student's amorous desire of her by showing him a menstrual cloth: "demonstrating the sign of impure material existence she said: 'This indeed is what you love, boy, nothing beautiful'". I do not think this represents "self-denigration" on Hypatia's part (174). If we pay attention to Damascius' Platonist vocabulary and thought, we can suppose that the point is that the world of material existence (genesis) is not where true beauty, the object of love, is to be found: this beauty is to be sought in a transcendent, immaterial life. The anecdote in Damascius looks like a mise en scène of a general philosophical point which had been made by Plotinus: "What then is the beauty in these [things in nature]? Certainly not the blood and the menstrual fluid" (Enn. V, 8, 2, 6-7). Leonard discusses this and other themes in the often misogynist and sexualized reception of Hypatia in ancient sources and in the 19th century (Charles Kingsley and others). E. Watts provides an elegant paper on two figures of the 18th century who published texts on Hypatia: John Toland and an anonymous French author, "Mademoiselle B.". Watts notes that Toland inaugurated critical interest and work on the ancient sources reporting on Hypatia, while not avoiding the instrumentalization of her in the context of contemporary polemics, whereas "Mademoiselle B." made the important move of ignoring these polemics and drawing attention to Hypatia herself, not so much to her murder as to her life and career, to the "true potential of female intellectuals" (205). Finally, C. Scheidegger Laemmle provides a very learned analysis of Amenábar's film Agora, where Hypatia is used again (commercially and ideologically), in relation for example to the US wars in Irak and Afganistan. The volume ends with a useful collection of ancient testimonies on Hypatia in English translation, a very detailed and useful commentary (by M. Haase) on Socrates Scholasticus' report on Hypatia's death, a Bibliography and Indices.

While this collection of papers offers papers of varying quality and pertinence on Hypatia's context and reception, it appears to me that what is most weakly represented is what was probably of most importance to her: her philosophy. Gertz's paper, to which one might turn, disappoints. While referring to some themes in Synesius, he leaves him aside, on the superficial grounds that a student can often "have little in common with his or her teacher" (138). Gertz seems ultimately to be under the influence of Karl Praechter's contrast between the Athenian and the Alexandrian schools (although he knows that this contrast has been refuted) in relating Hypatia to the philosophy of Plotinus and Porphyry, rather than that of Iamblichus. (The philosophy of Iamblichus should not be reduced to interest in theurgy.) Instead, he discusses at greater length a much later Alexandrian philosopher, Olympiodorus (6th century), who is a good deal further removed from Hypatia than was Synesius. I would like to propose that we can come nearer to Hypatia, for example in a text of Synesius, the De regno (composed around 400, when Hypatia was teaching in Alexandria), where the personification of philosophy teaches the Emperor Arcadius how to rule. Philosophy lives primarily a transcendent life of knowledge; she does not subordinate herself to the pressures of political affairs, but her advice can bring benefits to human existence in the sensible world. Here, Synesius' much admired and venerated teacher could take on the "face of true Philosophy," as Isidore did for Proclus in Damascius' Vita Isidori (fr. 129a Zintzen).

[1] One might mention in particular the book by Maria Dzielska, Hypatia of Alexandria, Engl. version Cambridge, 1995.