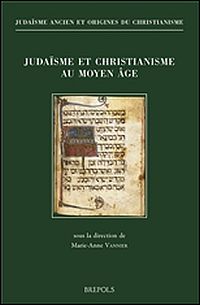 This collection of essays represents research presented at a colloquium in Nancy and relating to a religious history project devoted to medieval Judaism and Christianism (MSH-JECMA) funded by the Maison des sciences de l'homme Lorraine, France. The nine essays, in French, English, and German, discuss a variety of topics relating to the theme of the project.

The volume opens with Sylvie Camet's Preface (7-10) focused on the acts of conversion and disputatio, specific points of rendez-vous for Jewish and Christian cultures. Marie-Anne Vannier's "Présentation" (11-12) serves as an introduction proper; she notes that there are three foci in the book: exegesis, Passover, and the interactions of Meister Eckhart and Nicolas of Cusa with Judaism.

Under the implied header of exegesis are four essays: Daniel Boyarin, "Medieval Jews without Judaism: The Case of the Kuzari" (13-27), whose argument feels unfinished; a too apologetic Gilbert Dahan, "L'Utilisation de l'exégèse juive chez les exégètes chrétiens" (29-49); Annie Noblesse-Rocher, "Quelques remarques sur l'exégèse d'Ingetus Contardus dans la dispute de Palma de Majorque (1286)" (51-61), who does not tell readers enough about Ingetus; David Lemler, "Les Rationalistes juifs face à l'allégorisme chrétien (XIIe-XIIIe siècle)" (63-77), who explores the collaboration between the two religious communities. Each scholar argues that Jews and Christians interacted with each other and with the Scriptural tradition of the other, but little holds these four papers together as a group.

Only one essay falls under the rubric of Passover, that of Israel J. Yuval, who ponders "La matsa de Pessach et l'hostie de Pâques au Moyen Âge: relations considérées" (79-92). After discussing the development of Passover seder matzoh traditions, Yuval concludes by reminding us of the theatricality of the seder meal, which he suggests is a Jewish response to Christian Passion plays (89).

The last essays constitute the Meister Eckhart section. Markus Vinzent's "Presbyteron Kreitton? The Re-evaluation of Tradition by Jewish and Christian Teachers of the Thirteenth and Fourteenth Centuries" (93-106) argues that the Greek adage, "What is older is better," was reconceived by Jewish and Christian thinkers in Erfurt; Vinzent suggests that the two communities had more interactions than has previously been thought. Curiously, writing in English, the author did not use English language conventions for books of the Bible: Deuteronomium, rather than Deuteronomy, Numeri, rather than Numbers (96). I suspect that the author did not have a native speaker proof his work before publication. How else to explain "Eckhart adds two verses who prove that the contrary is true as well" (104), a clearly incorrect relative pronoun, just one example.

The editor,Vannier, contributed "Maître Eckhart et le judaïsme" (107-118) in which she argues that Meister Eckhart was more familiar with Hebrew texts and Judaism than has generally been admitted. She sees Eckhart in dialogue with Maimonides and thinks he was a pioneer in interreligious dialogue (117). Jean-Claude Lagarrigue's "L'influence de l'exégèse parabolique de Maïmonide sur Maître Eckhart" (119-132) explores why Eckhart wrote a second commentary on Genesis, the Liber Parabolorum Genesis. Lagarrigue sees the influence of Maimonides and a greater insistence on Christ as opposed to Moses, whose name is absent in the the second work. There is disagreement among the authors in this volume as to the extent of Meister Eckhart's knowledge of Hebrew, one marker of how these essays play with and against each other.

In the last essay, "Der Herabstieg des Weisheit in ihr Haus: Nikolaus von Kues und das Alte Testament" (132-144), Harald Schwaetzer considers two sermons carefully, numbers 100 and 124, arguing that Nicholas of Cusa is as much a philosopher as a theologian and that "docta ignorantia" can lead to "devotio" (142), seen in Cusa's use of the Old Testament to understand the New. This essay is minimally connected to others in the Eckhart section by the brief comment that Nicholas of Cusa built his interpretation on Eckhart's Quaestiones Parisiensis (141).

The book concludes with an "Index auteurs," nineteen names in all and limited in its utility, as well as an "Index thématique," which omits any number of useful index terms (sermons, for one) and does not serve the reader well.

Appreciation of the arguments of the volume is complicated by the many, inexcusable typographical and proofing errors I found. In Boyarin's case, his affiliation is not correct (the University of Berkeley for University of California, Berkeley); his abstracts are to a different paper, insofar as I can tell. There are punctuation issues, e.g. a missing n-dash between 1075 and 1141 (13) and examples of excessive punctuation: ..."."(18, 19, 21, 22, 25). His bibliography is incomplete, missing at least three works mentioned in the essay. In Dahan's case, yes, typesetting Hebrew in the midst of a Latin-alphabet text is tricky. However, that does not excuse the proofing error on 37, where the Hebrew line (Zechariah 1,8) was printed as איש רכב / על סוס אדם reversing the order of the words. It should have been printed on a single line as איש רכב על סוס אדם or broken as איש רכב
על סוס אדם. For Noblesse-Rocher, the issues are less significant (for sipiritualiter, read spiritualiter (51)), a missing blank line between the English abstract and the start of the essay (52), page numbers that should have been deleted when footnotes were added (see n31). Even the essay by Vannier, the volume's editor, has typographical issues (Turingien for Thuringien (109), conformatio for conformation (116)).

All the essays are accompanied by abstracts in English and French, almost all of which need additional editing by native speakers and better proofing. In a particularly egregious example, Schwaetzer's English language abstract, we read "The philosophical meaning of this exegesis is said in the lecture exemplified" (132), a sentence in desperate need of emendation.

In conclusion, this volume of essays provides readers with some new approaches and interesting angles of attack on the topic of Jewish-Christian relations in the Middle Ages, with a cluster on Meister Eckhart. Whoever had editorial responsibilities shirked their duty significantly (I have not noted all the errors). Provision of abstracts in English and in French is a convenience for researchers; would that these had been proofed as well. The presentation issues have seriously colored my opinion of the volume. The target audience for this book is fairly narrow, but those readers will find information of interest.