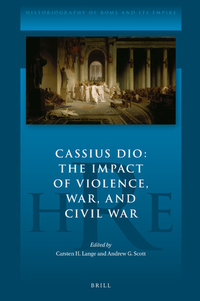 Lange and Scott's collection of essays on Cassius Dio's treatment of violence, war and civil war is the fourth in a series of collective volumes on Dio published through the Brill series "Historiography of Rome and its Empire." As a group these collective volumes, and two further monographs, represent an important movement to better understand Dio as both an agent in and reporter of Rome's history.

The volume is divided into five sections: "Violence" (two essays); "War" (four essays); "Civil War and the City of Rome" (two essays); "Civil War and the Senate" (three essays); and "Civil War and the Severans" (three essays). As this outline suggests, there is far more here on civil war than on wars against foreign powers. This can be justified both in terms of Dio's career and the preservation of the text. Much of the complete, as opposed to epitomized, text of Dio is concerned with the failure of the Republic and the civil wars leading to the establishment of the Augustan monarchy. In writing about this period, Dio was plainly influenced by the experience of civil wars in his own generation, first that which brought Severus to the throne, and then the one through which Elagabalus overthrew Macrinus. In addition to his lived experience, the authors of the papers in this volume make it plain that Dio's owed Thucydides a significant debt for providing schemata to explain the degeneration of human nature and civil society.

Granted that civil war played an important role in Dio's own lifetime, there is sufficient material throughout the rest of Dio's history, as known through the summaries, to gain valuable insight into just how his broader understanding of conflict shaped his understanding of civil strife. The value of this approach emerges from the essays in the volume's second section, with essays by John Rich's on Dio's view of Republican (chapter 3), Mads Lindholmer (chapter 4), Estelle Bertand (chapter 5) and Wolfgang Havener (chapter 6).

Rich argues that empire is "the result of natural human compulsions to which the Romans and their opponents had alike been subject" (89). The result of the acquisition of empire was the failure of the Republic and the emergence of the Augustan monarchy, which Dio thought was the ideal form of government. As Rich notes, Dio plays down the extent of Augustus' wars of conquest, and generally disapproves of aggressive wars launched by later emperors (83), though here it might have been worth exploring a bit further the distinction between wars started or waged for defensive purposes (e.g. Trajan's Dacian wars and Marcus Aurelius' Danubian wars) and campaigns undertaken to satisfy an imperial desire for glory (e.g. Trajan's Parthian war). Lindholmer's subtle reading of Dio's extensive account of Caesar's Gallic wars reinforces Rich's approach by showing how Dio presents Caesar "as a manifestation of broader problem, namely the malfunctioning of imperialism" (116).

Havener explores the military personae of emperors to show how Dio uses imperial failures in this role as an analytic tool while Bertand examines the geography of Dio's account of Severus' wars. She shows not only that Dio's information varies according to his ability to get local material, which shows that, despite his earlier, encomiastic work on Severus, he is not, in his history, willing to follow Severus' official line. In her view Dio's omission of Severus' assumption of the victory title Parthicus is deliberate and aligned with his evocation of a well-established topos whereby victory in the east introduces destructive luxury to Rome (132-134).

The theme of civil war as the epitome of moral collapse in Roman thought is addressed by Adam Kemezis (chapter 11) in his perceptive analysis of the way the later Severan "reliance on the army and disregard for hierarchy and order ... set in motion the dissolution that characterizes the narrative present" (281). He raises here the issue of how well Dio might have known Tacitus' Historiae, where the take on civil war is very similar to his own. One Roman whose work Dio certainly knew well was Cicero. Ayelet Peer (chapter 9) does a good job of showing how Dio makes use of Cicero to illustrate the difficulties senators had in processing the era of dynasteia which preceded the emergence of the Augustan regime. As she points out, Cicero is made to utter sentiments that are often at odds with reality, and his fate stands as a reminder to senators of any generation of the failures to see clearly the realities of their times.

Dio's subtly negative portrait of Caesar figures in a number of essays. Alex Imrie (chapter 7) argues (convincingly) that Dio contrasts the struggle between Caesar and Pompey, who fought a self-interested civil war, with the war between the triumvirs and Caesar's assassins, which was aimed at shaping a new form of government, and Augustus' victory over Antony, which is presented as a defensive foreign war (172-174). Josiah Osgood's splendid analysis of Caesar as a foil for Severus demonstrates that Dio was interested in stressing Caesar's inability to perceive the way people were reacting to him while implicitly contrasting his moderation with Severus' brutality (chapter 13). Neither was as good at managing the conclusion of civil war as Augustus (330). A similar point occurs in Joel Allen's perceptive discussion of gossip (chapter 2), which takes as its starting point the dialogue between Livia and Augustus about the best way to deal with an alleged conspiracy against the first emperor. Livia convinces Augustus that moderation is the best course. Here again a contrast with Severus' brutality is obvious.

Another late Republican victor in whom Dio had significant interest was Lucius Cornelius Sulla. In his essay on Dio's "psychological" and "sociological" interpretations of violence, Piotr Berdowski notes Dio's interest in people - Sulla is a case in point - whose personality disorders drive them to acts of violence (23-33). Violence, as a sociological phenomenon, prevents the proper operation of the state (40).

What emerges from these essays, taken as a group, is consensus that Dio presents Severus as a victor in civil war on the model of those in the late Republic who failed to establish lasting political systems. As Havener observed, Severus, who praised Sulla, is like Sulla in that his military persona is detrimental to the state (147-148). Here and elsewhere, as Konstantin Markov (chapter 10) points out, theme of institutional failure in the face of powerful individuals that runs through Dio's history of the late Republic recurs to explain failures of the imperial age.

Dio is not only interested in behavior, but, as Bertrand pointed out, the interaction between space and conduct. This issue recurs in essays by Carsten Lange (chapter 8) and Sulochana Asirvatham (chapter 12). Lange is interested in decapitation. The display of severed heads in processions, on the rostra and the Gemonian steps, for Dio is emblematic of the way civil strife is commemorated at Rome (213). The display of Roman heads, as opposed to those of foreign enemies, on the rostra, otherwise the centerpiece for orderly political life, is symbolic of civic disruption, the public display of body parts, of the destruction of civil society. Asirvatham opens with a discussion of failure of sacrifices to Concordia, ordered by the Senate, on behalf of Caracalla and Geta. For Dio, invocation of concordia in the years after the Hannibalic war, when he sees genuine concordia at play, is merely a cynical trope, used to occlude the realities of a fractured society.

Our knowledge of Roman history from the late Republic through the early third century CE is heavily dependent upon Cassius Dio. Hence the importance for all areas of Roman studies of volumes such as this one, which help us to a better understanding of how Dio's thinking shaped the way he constructed his narrative.