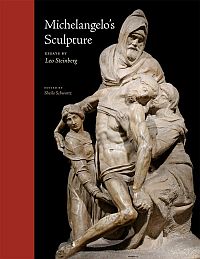 Michelangelo's Sculpture is the first in a five-volume series comprising reprinted and revised essays as well as previously unpublished texts by the late Leo Steinberg. [1] Edited by longtime friend and associate Sheila Schwartz, most of these writings trace their origins to the late 1970s and 80s - and yet remain strikingly contemporary. In this well-illustrated collection Steinberg focuses on Michelangelo's sculpted Pietàs, presciently treating issues of historical and contemporary reception, of the status and evidentiary value of copies, and of the "mixed temporality" of Renaissance art.

A preface by Schwartz opens the volume on a personal tone, speaking to the ways in which Steinberg's biography informed his approach to art history. Complementing this reflection is a lucid introduction by Richard Neer. Here the reader is made aware of the central argument animating the essays to follow: that for Michelangelo "anatomy becomes theology" (103). Through Steinberg's eyes, we see the artist grappling - ceaselessly - with a deeply-felt demand to render theological dogma "wholly incorporated" in the bodies and embodied interactions of his figures (126). Thus, a son's leg slung over his mother's lap in the Florentine Pietà intimates the mystical marriage of Virgin Mary and Christ; a paradoxically "vivacious" corpse in the Roman Pietà asserts the Man-God's dual nature - both fully human and divine. With a brilliance that perhaps approaches Michelangelo's own, Steinberg not only excerpts such elements for particular consideration, but reveals how they operate within a total system of signification: each gesture "overdetermined [...] by affect, symbolism, and the dictates of structure" (70).

The second chapter of this volume, "The Roman Pietà: Michelangelo at Twenty-Three" (unpublished lecture 1979, rev. 1999), masterfully displays this technique. In an intriguingly layered discussion Steinberg articulates the formal solutions of young Michelangelo in the Roman Pietà (1498-99) as "a matter of problem solving" (64). For example: the subtle under-scaling of Christ's body, its accordion-like bend at every joint, the way his body wraps around Mary's own - these elements all remedy the persistent problem of fitting a fully-grown man onto a woman's lap. But they also, as Steinberg suggests, serve expressive purpose by visualizing the love and intimacy between these two figures and serve devotional ends via the display of Christ's body - carefully oriented to showcase the stigmata. This is classic Steinberg: close visual scrutiny with an unabashed eye for the underlying erotic tenor of Renaissance art, all while taking images seriously as visually-argued theological exegesis. Fans of his groundbreaking work The Sexuality of Christ in Renaissance Art and in Modern Oblivion (1983, rev. 1996) will recognize and appreciate these strategies. [2]

Perhaps surprisingly, Steinberg draws our attention to many of Michelangelo's artistic solutions as something like innovative archaisms. A particularly fascinating excursus in "The Roman Pietà", for one, situates the smallness of Christ in the context of a longstanding medieval figural tradition wherein objects - even persons - are similarly under-scaled so as to signal their role as identifying attributes for a character. In this case, the diminutive Christ may act as an attribute for the Virgin as "Mater Dolorosa" (78). Such apparent "medievalisms" certainly complicate conventional modernizing narratives of the period. [3] Other ways of considering the complex temporalities in Michelangelo's art emerge in a second unpublished lecture, "Body and Symbol in the Medici Madonna." Steinberg here rigorously interrogates the gesture of a cross-legged Madonna, her strident babe draped in a swaddling - or shrouding - cloth, grasping her shoulder in a possessive act alluding to spousal connection. These bodies actualize the prolepsis typical of Christian theology: as the author notes, "both characters appear in three dimensions of time: present moment, sequel, and ultimation" - for example, "Christ is shown in his robust incarnation; his Passion foreshadowed; and in his mystic nature as the heavenly spouse" (128). Steinberg (1984, rev. 2004) speaks to the question of time in art before the "temporal turn" of art history prominently discussed in publications like Alexander Nagel and Christopher Wood's Anachronic Renaissance (2010). [4]

Following the lecture on the Roman Pietà is a short essay titled "The Medici Madonna and Related Works". While informative in tracing the likely migratory paths of an antique prototype through Michelangelo's own sculpture and a painting by Tintoretto, the text lacks the author's usual verve. Indeed, we find out that the majority of the planned essay had been suppressed for its publication in the Burlington Magazine - here the lost portion is restored in "Body and Symbol in the Medici Madonna" (120).

While by now it is a trope of Steinberg reviews to comment on the lucidity, elegance and engaging quality of his writing style, the praise bears repeating here. What I found most impressive in this moment of increased scholarly isolation was the sense of voice and presence that Steinberg brings to his writing. One often feels as if in direct conversation with the author, and moments of genuine hilarity bubble up throughout the text. Steinberg's gift to us: a mental image of his imposing self, trussed up in a hotel room by a hodgepodge of belts and bathrobe sashes so that he might understand the fall of drapery on the Medici Madonna - an amusing visual, albeit a sound investigative approach (127). "The Florentine Pietà: The Missing Leg Twenty Years After" also makes for an entertaining read, populated as it is with the snarky exchange between dissenting academics. And additional essays included here - a response to the attribution of the (now called) Young Archer, a fairly damning book review, and Steinberg's playful look at the intersections between medicine and art - are all well worth perusing. [5]

The title Michelangelo's Sculpture may be misleadingly broad: five of the nine essays focus solely on his Pietàs or the Medici Madonna, and I admit it puzzles me that Steinberg never took the trouble to seriously consider the artist's relief work. Yet aside from these minor quibbles, I can find virtually no fault with this compelling collection: even up to fifty years later, Leo Steinberg's words still give food for thought, granting us the rare opportunity to "look anew" at some cherished old masterpieces.

[1] As of August 2020, two further volumes in this series - one on Michelangelo's painting and the other on select masterpieces of renaissance and baroque art - have been released, with the final works slated to focus on Picasso and other modern artists.

[2] Leo Steinberg: The Sexuality of Christ in Renaissance Art and in Modern Oblivion, 2nd ed., Chicago 1996.

[3] However, as Stephen Campbell has argued, evoking the medievalizing-modernizing paradigm does also risk continually deferring and distorting the actual achievements of Renaissance art. Stephen J. Campbell: On Renaissance Nonmodernity, in: I Tatti Studies in the Italian Renaissance 20 (2017), no. 2, 261-294.

[5] Also included in Michelangelo's Sculpture is the oft-touted "shortest work Steinberg ever published" (ix): his six-word response to the question "What Would You Ask Michelangelo?"