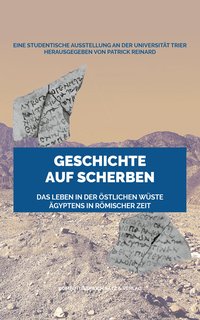 The ongoing publication of the ostraca excavated in the Eastern Desert has led to an increasing number of studies. These archaeological finds allow the reconstruction of relevant aspects of this region: the close connection between military and civilian activities, the key role the region played in the economy of Roman Egypt and its inhospitality for human settlement. These issues are touched upon in the book under review. It originated in a course held by Patrick Reinard at Trier University during the Winter Semester 2019/2020, which was flanked by an itinerant exhibition organised by the students and hosted by various institutions with the purpose of promoting the research outcomes among a wider audience (9-11). The book stands out for its innovative nature and for the speed by which it has been put into print, since the preface and the introduction report the date of May 2020 (8 and 14).

The book's core consists of six chapters written by the students plus one authored by Reinard, who is also the editor of the volume. The contributions concern water supply (15-29; Marius Hafke), the role of the military in keeping security (31-50; Julian Kaltwasser), Indian trade in light of literary and papyrological evidence (51-74; Peter Johann), the quarries of Mons Claudianus (75-87; Peter Meis), price, food and animals (89-106; Julian Heinz), women and prostitution (107-119; Alessia Tabone), and reconsideration of an interesting ostracon from Didymoi within military documentary practise (121-147; Patrick Reinard). They are preceded by a foreword and an introduction and are followed by an appendix of texts (99 ostraca, 6 papyri and 14 inscriptions) with translation and some accompanying notes, a list of editions, a bibliography and an index. Each chapter faces the difficulty of discussing in a few pages significant historical issues by regularly referring to the meaningful written evidence - usually ostraca, sometimes papyri, inscriptions and literature - and to the most relevant bibliography. Useful is also the table listing the Roman military forces attested in the papyrological and epigraphical finds (48-50) as well as the one on the ports involved in Indian trade along with the respective exchanged wares (71-74). The bibliography is rich and up-to-date: out of the 222 listed contributions (206-222), 78 have appeared since the year 2011 onwards.

As usual in papyrology, texts provide valuable insights especially when grouped and put in relation to each other. This is the case of the carrier Peteesis son of Paminis, found in various Berenike ostraca and probably to be identified with the Peteesis occurring in one Didymoi text (17-18). Different kinds of goods are attested in Nikanor archive and in ostraca from Berenike: wheat, barley, and wine were destined for the Roman ports and the export to India (57-59). Contacts between Roman soldiers and locals were twofold: military actions along with non-contentious relations between the two groups are witnessed by evidence from Didymoi and Krokodilô. They lead to consider the efficiency of the Roman protection network, which is likely to have been on the whole successful (42-47). The importance of animals in Mons Claudianus quarries emerges from the ostraca attesting camels and donkeys: probably, the former were employed for long-distance carriages, the latter used on the spot in mines and mountains. The load of a camel - possibly of water - may allow calculate the rations for stone-masons, but it is an isolated evidence (83-85). Price for food and animals is sometimes reported. Although not leading to clear conclusions on possible regional differences, it is assumed the price in Berenike to have been higher than in the Nile valley (89-91 and 105-106). Some Didymoi ostraca offer insights into contractual issues concerning prostitution (107-112), which was widespread in the forts because of the scarce presence of women. This was mainly due to the difficult living conditions in the Eastern Desert rather than to Augustan marriage legislation that prevented low ranked-soldiers from marrying (113-115).

Greek ostraca, which outnumber other writing materials in the Eastern Desert, are abundantly referred to and quoted, whereas the Latin ones - five Latin and two Greek-Latin appear in the appendix of sources (149-204) - could have been taken into more consideration, insofar as a fair amount of Latin papyrological evidence - in comparison with the rest of Egypt - comes from this region. A couple of further studies might have been referred to while discussing the topics of Indian trade [1] and prostitution [2]. Although not seriously affecting readability, in the appendix of texts the absence of line numbers and the full stops in place of underdots for missing letters inline may not be welcomed by all readers. The unusual decision of printing original texts in the regularised form may be ascribed to the nature of the book, to which is also due the suitable choice of translating nearly all texts in German (13), which are mostly available in English or French. Rare are misprints or inconsistencies, like Civigny for Cuvigny (121), the not regularised ὕδατ(ους) for ὕδατ(ος) (153, n° 9), the presence of both lunate and non-lunate sigma in one transcription (191, n° 96), ῶδ̣ε lacking the spiritus (203, n° 117), and qoud for quod (218).

These remarks do not reduce the positive assessment of the book, which is innovative in conception and succeeds in combining its didactic origin with the needs of historical research by widely resorting to the written evidence and taking into consideration a good amount of recent bibliographical sources. It proves thus to be an appreciable example for such initiatives and - in the light of the numerous collected sources - it can be useful for scholars who are interested in specific aspects of daily life in Eastern Desert.