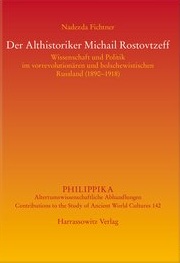 Michail Rostovtzeff has long been one of the titanic figures of modern historiography on the Hellenistic world and the Roman Empire. Generations of scholars have read and admired the great works he wrote about them in English. These works emerged from a long academic career in America after he fled Russia in 1918, when he was an outspoken opponent of the Bolsheviks. He taught first at the University of Madison in Wisconsin, and then afterwards at Yale University. But little has hitherto been known of the nearly 48 years outside Russia during which he launched and built his international reputation, both in his homeland and beyond. He traveled widely abroad, especially in Italy and Germany until the outbreak of the First World War. He developed close contacts with almost all the eminent historians and archaeologists of the time.

Rostovtzeff was a tireless and ever productive architect of his own career. Yet even now few who admire his work know anything about him before he left Russia. Arnaldo Momigliano, who praised him, once observed with characteristic acuity that we need to know about those long years in Russia before he left. That knowledge is at last available to western scholars in the exhaustive and well documented account of the Russian decades that is the subject of the present notice. The author, Nadezda Fichtner, is herself Russian, trained at Kassel, and her ground-breaking book is the result of a doctorate completed there.

After 1918 the name of Rostovtzeff was deliberately erased from the annals of Russian scholarship on the ancient world. The Great Soviet Encyclopedia did not even have an entry for him until the advent of perestroika in the mid-1980s. But from that time onwards, Rostovtzeff's modern compatriots worked strenuously to ensure that his homeland recognized the immense reputation he had already acquired abroad. The pioneer in this resuscitation was a scholar of Buddhism with a deep commitment to the study of classical antiquity, Gregory Bongard-Levin, who used his editorship of the Russian Journal of Ancient History (Vestnik Drevnei Istorii) to recover and publish unknown material from Rostovtzeff's first 48 years. He enlisted a team of younger colleagues in this enterprise.

Bongard-Levin's achievement stands proudly in two large volumes of documentation that have transformed our knowledge of Rostovtzeff's life and thought: Skifskii Roman of 1997 (Scythian Novel) and Parfyanskii Vystrel of 2003 (Parthian Shot), both published in Moscow. Fichtner has fruitfully mined these volumes, and many scholars will be particularly grateful because the Russian documents in them appear only in Russian. But Fichtner has done far more than this by consulting archival material that only became accessible in the mid-1980s. As a result she can provide a three-dimensional portrait of the young and middle-aged Rostovtzeff as he appeared to his peers and his students. His interests knew no limits. Archaeology and monuments were no less important to him than texts, and among texts he devoured inscriptions, papyri, and lead tokens with equal gusto.

Rostovtzeff's interactions with creative contemporaries outside the university of St. Petersburg, which was his base, are as impressive as those with Wilamowtiz or Eduard Meyer (whose friendship was tragically terminated by the World War). Fichtner is illuminating on Rostovtzeff's highly progressive views about women and women's education, and she illustrates his dedication to high culture through his involvement in Russia's "Silver Age", including the Ballets Russes, Stravinsky, Kandinsky, and Merezhkovsky. The sheer breadth of Rostovtzeff's tastes, beyond his formidable erudition, has never before been so fully known or so vividly described.

It was Rostovtzeff's passionate hatred of the Bolsheviks that led to his exile in 1918. But before he left in that year he continued his scholarly work with undiminished intensity. His book, The Birth of the the Roman Empire, appeared precisely in 1918, and in it he explicitly acknowledged the impact of the rapidly escalating crises that enveloped him. There is a noticeable parallel here with Ronald Syme's Roman Revolution of 1939, which was admittedly influenced by a cascade of calamities in that year. The fate of Rome became a paradigm for the contemporary turmoil that confronted both Rostovtzeff and Syme. Fichtner's book will undoubtedly inspire further reflection and research in the years to come.