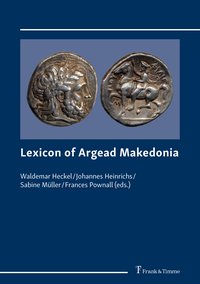 Amongst the many recent studies relating to the history of Ancient Macedonia, this book offers an interesting perspective, focusing as it does on the Argead Dynasty, in the form of a lexicon or an index of entries. This is a somewhat risky venture, given that although the reader can gain access to specific information rapidly, an overview of the subject matter is lost. Another problem is that it is not always easy to make a distinction between the events that took place in Macedonia between the "heroic" periods and the death of Alexander IV (310 B.C.) and those events that relate to the dynasty that governed the country, given that ancient authors tend to focus their attention more on the activities of the monarchs than on other aspects of Macedonian life. However, conversely and at the same time, as can be seen from the selection of entries, there are many other points that are also linked to the Argeads and are not tackled here (see below), whilst other points that are addressed may have more to do with Macedonia itself than with the Royal Dynasty.

The book's four editors, W. Heckel, J. Heinrichs, S. Müller and F. Pownall, are all renowned experts in different aspects of the history of Ancient Macedonia, and, amongst them, they present a total of 247 entries written by 44 different authors (including the editors themselves). Each of the entries presents an updated state of the question for the object of study, replete with cross-referencing when the entry tackles aspects that are also developed in others, which means the reader can complete the information that is compiled, if required. Ancient sources are cited liberally, which means the reader can also gain easy access to the primary sources. Each entry ends with a brief bibliographic selection, both specific to the entry in question, and taken from a bibliography included at the beginning of the book, which brings together a good number of the most recent and important works.

We would like to reiterate that we consider this work to be of considerable importance and interest, in which respect we would not wish our observations to minimise its value and importance. We are well aware that many different criteria and points of view exist when it comes choosing the entries to be included in a lexicon and that the editors have undoubtedly thought long and hard about their selection, whilst the reviewer has little right to impose his own ideas. However, we believe it would be useful to make a series of suggestions. One of them relates to the inclusion of the same episode in many different entries, for example the Pyxodaros affair. There is no specific entry devoted to this matter, but it appears on at least six or seven occasions, and it is handled in a very similar manner. Something similar occurs with the confrontation between Philip II and his son Alexander during the wedding celebrations of Kleopatra, Attalos' niece. It is true that such episodes come to life more when you read the book from beginning to end, being somewhat obscure when you simply consult the specific entries. In this respect, it may have been a good idea to devote specific entries and references to these matters, which would also have reduced duplication.

Similarly, we came across a number of very similar entries, for example, those relating to the Opis Mutiny and the Opis Speech, which could have been dealt with in a single entry. The entries corresponding to Parmenion and to Philotas are also very similar, which is not surprising when we consider that they were written by the same author. The same occurs with the entries devoted to the Peloponnesian War and to Perdikkas II, both of which were written by the same author.

We would like to have seen a number of entries included, such as, for example, some entry relating to Philosophers or to Philosophy. Although there are specific entries devoted to Aristotle and Plato, and even to Kallisthenes and Onesikritos, there are other philosophers who were important to some Argeads, such as Anaxarchos of Abdera (mentioned, however, in the entry devoted to kolakes) and Pyrrhon of Elis, mentioned alongside the former in the entry devoted to Royal Patronage, but featuring only very brief details. Diogenes of Sinope, nevertheless, has no place in the Lexicon and, yet, there is an entry devoted to Lucian of Samosata, whose inclusion we do not question, but whose presence makes the absence of a specific entry concerning contemporary philosophers during the period of the Argead Monarchs (figures who actually interacted with some of the kings) all the more stark. This entry would complement those philosophers who are dealt with specifically in the book.

We previously mentioned the absence of certain entries that are, in our opinion, rather important, such as a specific reference to the Battle of Issos (the book includes entries for Granikos, Gaugamela and Hydaspes), in spite of the fact that this battle is mentioned in the entry for Gaugamela. Furthermore, we believe that Mazaios, although mentioned in other entries, had sufficiently intense dealings with Alexander III to deserve his own entry.

Similarly, we are also surprised at the absence of an entry devoted to the Alexander Mosaic in Pompeii, which, irrespective of whether it may or may not have been a copy of the painting commissioned by Kassandros from Philoxenos of Eretria (Plin., NH 35.110), constitutes one of the most exceptional examples of the exaltation of an Argead King. In fact, there is no mention made of it even in the entry relating to Macedonian Art, perhaps because the book adopts a rather too restrictive perspective regarding what "Macedonian art" is. At the same time, we would consider the absence of an entry for what is known as the "Alexander Sarcophagus" of Sidon to be a significant omission; there is a brief reference to it as the Abdalonymus Sarcophagus (as opposed to the more suggestive, and probably more correct, theory proffered by Heckel [1]) in the entry on the Lion Hunt, but its interesting iconographic scheme materialises the idea of collaboration between Greeks and Macedonians with the Persians, as supported by Alexander III. In this respect, its inclusion as a specific entry would have fitted in well with the Lexicon's objectives.

The question of Alexander III's tomb also would deserve its own entry, over and above the different references to it in other entries (including the one relating to Alexandreia). In addition, we would also have liked to have seen an entry devoted to the husband of Kleopatra, Alexander III's full sister, Alexander I the Molossian, who is hardly mentioned in this entry or in the entry devoted to Epeiros. Another entry should, perhaps, also have been included for Thessalonike, another of Philip II's daughters and also a member of the Argead family. Although passing reference is made to her in some other entry, she would surely deserve more attention in a lexicon on the Argeads.

Finally, in order not to dwell too long on the entries that we believe could have been included (and in spite of the fact that some reference is made to them in other entries), we might mention various headings such as "Palaces", "Macedonian Pirates", "Royal Letters", "Samothrace" and "Troy".

The book does not contain any maps, whilst some of the images (such as the painting of the Lion Hunt on Tomb II in Vergina) are reproduced in such a minuscule format that it is impossible to capture any detail.

In short, this book is an extremely useful tool for anyone who wishes to undertake a study of Argead Macedonia. In it the reader will find an updated state of the question regarding a good number of the problems that the subject presents. The Lexicon format will facilitate its use as a rapid and immediate source of reference. The observations we have made here should not be viewed as criticisms, but as suggestions that might improve, at least in our opinion, the utility of the work.