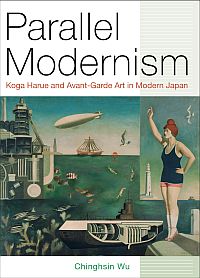 Parallel Modernism joins a number of recent publications on Japanese art that explore the global dimensions of Japanese modernisms, each from a slightly different perspective. It builds on the groundbreaking study of Yorozu Tetsugorō (1885-1927) by Alicia Volk [1] and echoes Nozomi Naoi's monograph on Yumeji Takehisa (1884-1934) [2] as all three authors explore modernisms and modernity in Japan through the lens of a single artist, well-known in Japan but relatively new to English-speaking audiences. Parallel Modernism also reverberates with other books that aim to decenter modernism from a Japanese perspective - be it Ming Tiampo's Gutai: Decentering Modernism, Gennifer Weisenfeld's Mavo: Japanese Artists and the Avant-Garde, 1905-1931, Reiko Tomii's Radicalism in the Wilderness: International Contemporaneity and 1960s Art in Japan, Erin Shoneveld's Shirakaba and Japanese Modernism: Art Magazines, Artistic Collectives, and the Early Avant-Garde, or Eugenia Bogdanova-Kummer's Bokujinkai: Japanese Calligraphy and the Postwar Avant-Garde. [3] While adopting different terminology and calling what Wu names parallel modernism either decentering modernism, artistic contemporaneity, or multicentered or multiple modernisms, all these studies challenge and redirect Eurocentric narratives of modernism away from the center-periphery trajectories. The authors, however, either focus on groups or movements rather than individual artists. In comparison, Wu's tracing of Koga's engagement with various -isms shows the porosity and fluidity of borders between them.

Parallel Modernism's structure is chronological in tracing Koga's professional career, in which he engaged with several new art movements in Japan. Through Koga's experience, Wu introduces the early watercolor movement, Cubism, Expressionism, and Surrealism in Japan - the last of which is the hallmark of Harue's œuvre. The book's introduction offers a theoretical overview of the concept of parallel modernism that Wu borrows from quantum physics, as well as background information on the socio-historical setting of the study. Chapter 1 discusses Koga's early years, his engagement with watercolor, and the role that this often overlooked yet vastly popular medium played in Japan's art landscape in the first two decades of the twentieth century. Chapter 2 is dedicated to Koga's transition to Cubism, which he merged with his interests in religious and Buddhist themes, as well as the art of El Greco (1541-1614) and the Croatian artist Ivan Meštrović (1883-1962). Chapter 3 traces Koga's shift to Expressionism and his creative engagement with the art of Paul Klee (1879-1940) and the merging of his interests in the visual and the poetic. It contains some interesting analysis of transnational visual flows based on Klee's works as interpreted and reimagined by Koga through a limited number of Klee's illustrations and reproductions of his works available in Japan at the time. In Chapter 4, Wu turns to the best-known part of Koga's legacy, his contribution to Surrealism, and to the visual and literary manifestations of this art movement in Japan, illuminating what appealed to Koga about the movement and its specific implementations in Japan in the late 1920s. In the final chapter, Wu continues discussing Koga's Surrealism, and, through in-depth analysis of his emblematic works, dwells on the contribution of Surrealism to the embracing and processing of modernity, its promises and anxieties, in Japan. The epilogue takes up this motif and addresses the history of Surrealism during the war and after Koga's lifetime; it also considers how the creative possibilities of this art form enabled artists and their audiences to express what was otherwise inexpressible during the darkest times of the twentieth century.

Several aspects of this book make it a valuable contribution to the field. Most importantly, it provides an important addition to modern Japanese art and visual studies, which are not yet sufficiently presented in English-language scholarship. These include the role of watercolor painting in establishing modern Japanese art and the trajectories of Surrealism and Cubism in Japan. Also, the art and career path of Koga Harue, celebrated in Japan, has never been introduced to English-language audiences in this depth and detail until now. Wu presents a large body of new archival material and familiarizes the reader with the Japanese art scene of the early twentieth century, its networks and institutions. Parallel Modernism also further contributes to discussions on decentralizing modern art within Japan as it juxtaposes developments in Tokyo and Fukuoka Prefecture, of which Koga was native.

However, while Wu, particularly in the introduction, frames her study as one whose significance lies in its theoretical contribution to the field and presents the concept of parallel modernism as a new approach to global discussion of modernisms, this is outweighed by the new art historical information and artworks the book introduces. Furthermore, beyond the introduction and the first two chapters, when moving on to Surrealism in Japan, the theoretical thread of parallel modernism becomes weaker and almost disappears towards the end of the study and its epilogue.

Furthermore, while Wu carefully references Japanese-language scholarship on Koga and the Japanese -isms to which he contributed, in particular in historical references and visual analysis, the book does not include a systematic and critical overview of the extensive Japanese-language historiography on Koga's art. Such an overview would provide a more balanced contribution to decentering modernism by the addition of information on visual art works and primary sources travelling between cultures and languages, and the academic traditions of their interpretation and assessment.

Wu's Parallel Modernism contributes significantly to our understanding of twentieth-century Japan and the intertwined trajectories of personal artistic careers, art groups and networks on the one hand and global art trends and local developments on the other. This book will be a useful reference not only for art historians specializing in modern Japanese art, but also a valuable teaching resource for courses on modernisms and modernities, various -isms and their global reverberations, and for teaching in the field of Japanese visual culture.