Angela Vanhaelen: The Wake of Iconoclasm. Painting the Church in the Dutch Republic, Philadelphia, PA: University of Pennsylvania Press 2012 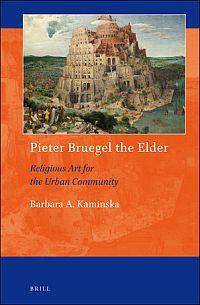 The 1574 eulogy for Pieter Bruegel the Elder by Abraham Ortelius contains an interesting remark: "In all his works more is always implied than is depicted" (210). This praise of the hermeneutic richness of Bruegel's art afforded by its pictorial economy implies something on its own: a knowing, and willing, audience - like Ortelius himself - alert to the nuances of the picture. What Ortelius tentatively suggests - a tacit, collaborative, even complicit, relationship between the artist and his viewer - becomes a vivid portrait in Barbara Kaminska's book in which she explores dexterously the making and reception of art during the religious upheaval in Bruegel's Antwerp.

Kaminska writes in simple structure. Each of the book's six chapters examines a religious painting by Bruegel and the ways his work cultivated spiritual and moral edifications among his urban audience. Yet in every chapter this agenda gives way to a penetrating examination of intellectual traditions as well as pictorial and spectatorial agencies. Readers will explore the codified social life of Antwerp's illustrious residents, who approached the open-ended questions raised by Bruegel's paintings as an opportunity to negotiate communal identity. They will also witness the calculated uses of art by Habsburg rulers, local government, and citizens as all parties struggled to navigate their inflammatory, often fatal, differences. For this matter, I find this study a thoughtful response to Baxandall's "Period Eye" [1], in particular as Kaminska demonstrates that interpretive plurality stemmed from a cultural one.

Beyond subject matter, plurality is the reflexive theme of this book. Kaminska maintains that Bruegel's paintings played multivalent roles in cultivating diverse responses. Her examinations of The Tower of Babel (1563) and The Conversion of Saint Paul (1567) exemplify that approach. As she demonstrates, the former painting prompted interrogation of the elite's allegiance to maintaining Antwerp's diversity and cosmopolitan prosperity, while the latter work thematizes the straight and narrow, though not without critiquing those who mistook confessional display for spiritual illumination. Such pictorial provocations were certainly responded to by the audience, but they were simultaneously important catalysts for congealing exclusive circles of interpretive heterogeneity. While these nonsectarian works offered beneficial challenges to Bruegel's open-minded audience, their interpretive ambiguity further shielded these viewers from accusations of heresy. To be sure, Bruegel paintings had limited agency - "they did not prevent the catastrophes that befell Antwerp" (215), as Kaminska deftly points out - but, embodying "the Renaissance's fascination with copiousness" (40), they pointed to diversity and tolerance as enduring civil solutions to conflicts.

Arguably the most telling case about the audience's appeal to spiritual diversity comes in the discussion of convivia, formal gatherings of the city's well-to-do outside the urban hustle and bustle. Here, the author explores the deeply reflexive world of early modern "suburbs." The country retreats, like the activities taking place inside them, were rendered meaningful theses on balance and moderation. Just as the villas provided comfort and obliged husbandry, thereby demanding a reckoning of otium and negotium - or leisure and business - the dinner parties themselves created an exercise in negotiating differences. Participants were expected to wander among topics ranging from philosophy to religion in the development of a dynamic conversation, which in turn "allowed for a multidimensional discussion that did not require reaching a consensus" (37). The results, according to the author, were "mechanisms" developed by the open-minded elite, "through which the community negotiated the conditions of its existence" (51). Although the content of these dinner table conversations remains obscure, convivial literature titillates our imagination with prudent fictions. Kaminska convincingly argues that literature and customs were analogous, to say the least. On the face of it, the former drew inspiration from the latter, which in turn echoed the former. But more importantly, she demonstrates, both were deeply involved in the cultivation of a harmonious society, despite their different motivations - spiritual edification for the one, and entrepreneurial gain for the other.

Kaminska's contribution to the field extends beyond the demonstration that pictorial complexity requires both articulation and enactment. The originality of the book is also a matter of rigorous use of new archival material, perspicaciously uncovered by the author. Thanks to these discoveries, we are invited to witness the lives of not only the "usual suspects" of Antwerp's elite, but also citizens of lesser historical consequences. Notably, the author presents to us something quite close to a virtual tour of middle-class houses belonging to hitherto anonymous residents, Catholic and Protestant alike. A well-off Lutheran couple, we learn, chose to decorate their semi-public living room with paintings of generic religious themes and reserved those of specific Lutheran motifs for their private study (78-79) - a telling story about the impact of the Habsburg's religious censorship. Midcentury city life, including such acts of confessional self-fashioning, unfolds, and the reader begins to grasp the relationship between individuals and highly cultivated communities in fuller, more inspired ways.

Throughout the book, Kaminska presents innovative ideas in beautiful, effortless prose, which in turn brings lucidity to her complex acumen. Yet, a question emerged as I tried to decipher her meaning of "discursive." It appears that she employs this term to refer to "open-ended," "flexible," and "tolerant." For instance, she talks about the "discursive" exchanges between performers and audience at banquets (137) and "nondiscursive" images suggesting confessional fixation at processions (130). Nonetheless, the enormous implications of the term, particularly from discourse theory, merit some explanation, if only so that the specific suggestion of plurality can be readily grasped. In addition, I believe this study would have benefited from an examination of Erasmus's Praise of Folly [2], the towering achievement in interpretive plurality. The advantage of making such a connection lies beyond an understanding of the psyche of Bruegel's receptive, Erasmian collectors, but also in tracing the evolving agenda of humanism in the increasingly polemic society of the sixteenth century.

Kaminska's erudite study of artistic agency and a transforming society adds an important piece to the puzzle of Bruegel's ingenuity. Beyond the interests of Bruegelian scholars, the study also prompts topical reflection by a wider audience on matters that surpass visuality, such as the social and intellectual values of pluralism. Writing on negotiation and the building of communities, Kaminska invites collective rumination over a timely question: under what circumstances does it become possible for us to agree to disagree?

[1] Michael Baxandall: The Period Eye, in: Painting and experience in fifteenth century Italy: A primer in the social history of pictorial style, ed. by Michael Baxandall, Oxford 1972, 29-108.