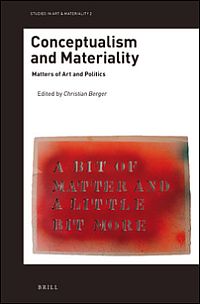 In her famous 1973 account of the art of late Sixties and early Seventies, Lucy Lippard intertwined through the feeble thread of the "dematerialization of the art object" so various and worldwide artistic experiences such as "the so-called conceptual or information or idea art [...] minimal, anti-form, systems, earth, or process art, occurring now in the Americas, Europe, England, Australia, and Asia". Embedded in the first line of the iconic, epigraph-like cover, that label got easily over-cited and taken for granted in the following decades, albeit Lippard herself admitted that "for lack of a better term I have continued to refer to a process of dematerialization, or a deemphasis on material aspects (uniqueness, permanence, decorative attractiveness)". [1]

A 2019 book edited by the German art historian Christian Berger tries to break up this label, in order to reassess radically the parameters of analysis often adopted with conceptualist artworks (which leave a heavy inheritance to nowadays art practices), discarding eventually the implicit equivalence between Conceptualism and dematerialization. Replacing the latter with "materiality", the title announces an appealing paradox: the possibilities of investigating the meaning of materials, physical properties and techniques (and the concept of materiality itself) in artworks based by definition on concepts, ideas, language and the obsolescence itself of the object.

As a collection of essays, the book finds a way around the usual flaw of this format, that is a centrifugal tendency of the resulting sequence, and in Berger's curatorship one appreciates a stable structure. His introduction puts into perspective the objectives of the volume and throws a glance on the reciprocal coherence of the subsequent essays. An immediate quality of this text is the constant, detailed and extensive bibliographical reference (sixty-two titles are evoked in only nine pages), which ensure a recapitulation and a positioning in the enormous literature about global Conceptualism.

Centering on Lippard's first formulation of "dematerialization" in an early 1968 article in Art international written with John Chandler, Berger's own opening essay articulates a careful analysis of the historical context of this hermeneutical concept and ponders the reactions to its introduction. The idealist-rationalistic root of Lippard's separation between idea and matter is individuated as a point in common with the "analytic", language-based practices of Joseph Kosuth and Art & Language. More interestingly, this dualism is a point of substantial divergence of other artistic practices, as Sol LeWitt's, Robert Barry's or Douglas Huebler's, which explored the material outcome of their works in a more ambiguous way.

Investigating the past trajectories of dematerialization, Berger brings up possible, inedited earlier sources (Medardo Rosso and Kandinsky), meant as cultural components rather than direct references. A question of temporal priority has been set in literature concerning Lippard's relationship with the Argentinian critic Oscar Masotta, the author of a 1967 lecture entitled "After Pop, We Dematerialize". Berger, who substantiates his hypothesis with archival findings in Lippard's papers at the Smithsonian Institution, postpones her knowledge of the text to 1969, a relationship to Argentinian conceptualism corresponding rather to her new interest in information and the political agenda of dematerialized practices. This theme, "the politics of information" (36), concludes Berger's essay, and tries to redeem the political instances of conceptualism, defined naïve or failed in predominant literature. [2] Two 1970 international exhibitions framed positively the artistic use of communication, technology and cybernetics, that is Kynaston McShine's Information and Jack Burnham's Software: there, dematerialization functioned more as a "useful myth" for the expansion of the art field to "the world at large" (45).

The following nine chapters are dedicated to worldwide, non gender-biased case studies divided into three sections. Firstly, the choice of working with "intangible" materials is explained by an evaluation of their physical properties: it is the case of air, chosen by Michael Asher for its "sheer ubiquity and its lack of visibility" (61), or light, in Jan Chwalczyk's objects called Reproducers (which were commented by the critic Ludwinski in a text fundamental to Polish conceptualism, as reported by Magdalena Moskalewicz's). Kavior Moon reads brilliantly Asher's projects on paper in order to show how his investigation of the movements and effects on the public led to his manipulation on the architecture where the works were set. Since long interested in relationships between science and art, Larisa Dryanksy brings then to attention an extremely interesting theme as the influence of antimatter, or rather of theories about it, upon artistic works. The period taken into exam spans from the late Fifties (with the Italian artist Pinot Gallizio's 1959 Cavern of Antimatter) to the early Seventies, with works by Richard Serra, Dan Graham, John Latham. Particularly valuable and surprising is her reconstruction of the more or less informative texts that were read at the time by the artists (as The Mystery of Matter, 1965; Jammer's Concepts of Mass in Classical and Modern Physics, 1961; Gardner's The Ambidextrous Universe, 1964; or Paul Dirac's hole theory that was a direct source for Mel Bochner).

The two essays concerning language in the second section are both characterized by articulated theoretical introductions. Sabeth Buchmann's intense argument points out Lawrence Weiner's original idea of linguistic materiality, as "language has the ability to evoke an object without being that object itself" (172) with references to Szondi's and Sartre's reading of Mallarmè, as well as Derrida's observations on the iterability of meaning. Centering on the materiality of language as its sociability, Jacob Stewart-Halevy's broad, brilliant analysis of Ian Wilson's Dialogues brings to light the community of artists behind his work through meaningful archival finds. Niko Vicario and Zanna Gilbert focus then on communication media and their political consequences. The former gives a fruitful example of the history of an object, that is the teletype, and its occurrences both in the United States and South America; the latter stresses the artisanal qualities of the Argentinian artist Edgardo Antonio Vigo's reflection on artistic participation through an original conception of mail art. The last section's ambitious objective is to expand on the affective dimension of conceptualism, whose examples are found outside the Americas. Spirituality finds a bulky material presence in Matzuzawa Yutaka's practice, analyzed with precious inedited material by Yoshido Shimada and an artwork thematizing love by the Polish artist Zofia Kulik (accounted by Luiza Nader's using Roland Barthes' Fragments as a theoretical frame).

A solid repertoire of subtle strategies of analysis, brilliant ideas and bibliographical paths, this volume is a valuable point of departure for further studies in materiality and it contributes to look at Conceptualism through new lenses. In doing so, it can be put alongside other recent successful attempts. To name but two, Anna Lovatt accounts for the practice of "drawing" as a productive point of view on the Conceptualist artists Bochner, LeWitt or Dorothea Rockburne. [3] For his part, Michael Rottmann reveals how deeply mathematics and its applications shaped Minimal sculpture and Conceptual thought in the Sixties. [4] All these studies' main quality is to get closer to how the artworks were practically conceived and understood in their time, keeping aside their coeval rhetoric and "useful myths" without forgetting them, as in the case of dematerialization.