Katelynn Robinson: The Sense of Smell in the Middle Ages 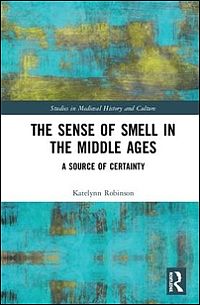 During his battle with Morold, young Tristan in Gottfried von Straßburg's Tristan (ca. 1210) receives a wound from the opponent's sword. Strangely, the mighty Irish warrior had resorted to poison placed on the tip of his weapon, as if he had not been assured enough of his own chances at winning. But Tristan then can kill Morold and return from the island leaving the dead man behind, carefully hiding his wound from the other Irish knights awaiting the outcome of the fight. They thus do not learn of his serious injury, which soon turns into an almost fatal sickness with his wound becoming putrefied and badly smelling, the poison circulating throughout his entire body: "dar zuo gevie der selbe slac / einen sô griul&#238chen smac, / daz ime daz leben swârte, / sîn eigen lîp unmârte" (7275-78; moreover, the wound emitted such a horrible smell that his life became burdensome; his own body was despicable for him). [1] In one of Meister Eckhart's (d. ca. 1328) sermons we come across this passage: "ô herre, wie grôz und wie manicvaltic ist dîn / wirtschaft und der smac der süezicheit, diu den bereitet ist, die dich minnent (Oh Lord, how great and manifold is your working and the smell of sweetness prepared for those who love you). [2]

In fact, Middle High German texts (fictional and factual, including medical and culinary) contain many passages reflecting on the significance of smell. [3] The same applies to much other medieval literature, with Dante's Inferno probably being the most dramatic example (ca. 1310).

Modern research has certainly taken note of this, maybe best represented by C. M. Woolgar's seminal study (2006). [4] In 2014, Romedio Schmitz-Esser offered a most detailed study on the treatment of corpses in the Middle Ages, and engaged in that context also with the use of aromata and with the sweet smell allegedly being emitted from the corpses of saints. [5] Now, Katelynn Robinson embarks on this topic as well, examining, above all, the testimony by medieval philosophers and medical doctors, taking into consideration the ancient Greek, Arabic, and Latin tradition. This book is based on her dissertation from the University of Missouri (2017; date here not given), directed by her advisor, A. Mark Smith. It does not need much convincing to accept that from early on the sense of smell was recognized as a major aspect of human existence, and as our own examples have already indicated, smell could be associated with something evil and something good. The devil leaves a bad odor behind, while the appearance of God or a saint is regularly associated with pleasant fragrances.

Robinson, however, is mostly concerned with the medieval theory about the olfactory sensation as discussed by numerous intellectuals. She begins with the ancient philosophers Plato and Aristotle, then turns to Galen, and subsequently to an almost countless number of medieval thinkers, such as Isaac Israeli, Avicenna, Averroes, Haly Abbas, and Constantine the African. After all, the health of the human body had a huge impact on the spiritual health - a notion which certainly applies also today.

Robinson offers a very impressive close reading of many of the relevant sources from the twelfth through the fifteenth centuries, especially those written by Arabic scholars, whose works were then translated and interpreted by their European-Christian successors. Another critical aspect of her study consists of a thorough examination of medical theory because smell allows the doctor to understand much of what is going on in the body, such as the smell of urine - certainly a valid approach also today.

The theoretical reflections quickly led to numerous practical applications especially since the outbreak of the Black Death in 1347 (not 1348, as claimed here) because many cities tried to protect themselves by way of relying on the miasma theory - Robinson prefers the term 'corrupt air' (115), cleaning the urban air as a preventative or counter measure. This topic has already been covered to a large extent by older research, especially Karl Sudhoff, but Robinson expands on those previous findings and connects those more strongly with the theoretical reflections by the contemporary philosophers and medical doctors, such as Bartholomew the Englishman.

In that context, the author also includes, briefly, references to literary accounts, such as Boccaccio's Decameron (ca. 1350) and Chaucer's Canterbury Tales (ca. 1400), but she does not go much beyond that and is not aware of many other highly telling narrative documents (see above). Instead, her emphasis rests on the learned discourse, which proves to be impressively detail-oriented toward the olfactory sense. Robinson makes considerable efforts to summarize and discuss the various theories developed over the centuries and outlines the great import of the olfactory sense for theology, philosophy, and medicine. She emphasizes especially the connection between spirituality and olfactory sense, and thus connects her study more intimately with the theological discourse on good versus evil.

The book has an odd and cumbersome structure. Each chapter is followed by its notes and the bibliography relevant only for that chapter. This makes it extremely difficult to search for specific references. There is an extensive index, but it does not prove to be exhaustive and could have included many more references, such as to herbs, flowers, names of poets, etc. Nevertheless, Robinson deserves considerable credit for her thorough examination of the ancient Greek, Latin, and Arabic sources, which contain, indeed, much information about the perception of smells within a theological, philosophical, and medical context. Despite considerable differences in the interpretation of smells throughout the centuries, there is a clear sense - pun not intended - that the various writers were often fully informed about the various sources and accepted them (Aristotle, Galen, etc.) as their authorities. Robinson comments on this fundamental insight repeatedly (and repetitively), but it would also have been advisable if she had paid more attention to the literary or art-historical evidence and to the practical efforts by urban authorities and medical practitioners to combat corrupt air. In short, further research is awaiting us here, a wonderful outcome of the author's own efforts.