Zenonas Norkus: An Unproclaimed Empire: The Grand Duchy of Lithuania 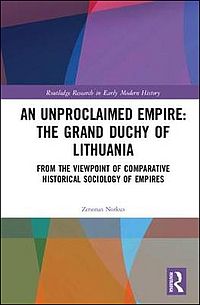 This ambitious book, well translated from the Lithuanian version [1] by one of Lithuania's leading social scientists sets out to prove that the medieval Grand Duchy of Lithuania was an empire despite the fact that, apart from a throwaway line from one of its medieval rulers, nobody at the time seems to have regarded it as such. The intention is to add a case study to the modern social science literature on empires, to use it to critique current schools of thought in imperiology, and to provide a new understanding of medieval Lithuania.

Zenonas Norkus is not impressed by the current state of the historiography on the Grand Duchy. He admonishes historians not just for their failure to recognize that Lithuania was an empire, but for their neglect of social scientific theory. In particular, they are castigated for being "emic, " rather than "etic, " to apply a distinction utilized by cultural anthropologists: that is, they insist on applying concepts used by the historical actors they study, "disparagingly calling 'an anachronism' the description of ancient social life using later or contemporary vocabulary" (73).

The historian might mischievously respond that the reason is that social scientists seem mostly to be interested in other social scientists, whose names populate the rebarbative Harvard system of notation, used here, which at times seems more like an exercise in performative name-dropping than a useful aid to the reader. No less than half the book is taken up with a critique of theories of imperialism. Benighted emic historians, cackling in Latin and reluctant to raise their noses from their dusty sources, are given a crash course in etic imperiology. They are instructed in realist and neo-realist schools of imperiological research; in internationalist, liberal, and idealist approaches; in hegemonic stability theory; in hologeistic analysis and crisp set theory. If this does not drive them back to their pipe rolls, they can digest cliometry and cliodynamics in their full glory, supported by graphs, tables and the magnificent Herfindahl-Hirschmann index (HHa = ƩAi2/A2), where A is the total area of dry land on Earth, and Ai is the area of an individual country, whatever that might be.

Seriously, however, this is an interesting and stimulating book. Norkus ranges widely, the critique of imperiology is lucid, and a major contribution of the book is its analysis of the cliometric approach of the American-Estonian political scientist Rein Taagepera and the work of the distinguished pre-war Lithuanian lawyer and statesman Mykolas Römeris (Michał Römer), which is probably less familiar to an international audience. Although historians are criticized for their Eurocentrism, postmodern and postcolonial approaches are not explored, since Norkus, having established to his own satisfaction that medieval Lithuania was an empire, adopts a positive approach towards it as the forerunner of the modern, independent Lithuanian state, a position not exactly prominent in postcolonial studies.

There is much food for thought for historians in the second half of the book, where Norkus turns his imperiological arsenal on medieval Lithuania. He has read extensively in the historical literature, and his critiques of the scholarship are thoughtful and to the point. Yet a historian is entitled to wonder if a series of straw men are being erected. While historians certainly care about anachronism, as N. admits, very few if any are entirely emic in their approach. Likewise, few historians would have any problem in accepting that the fourteenth-century drive of the Gediminid dynasty to extend its control over much of what had been Kievan/Kyivan Rus' might usefully be termed "imperial, " and Stephen Rowell's classic 1994 account [2], copiously drawn on by N., was happy to call the Gediminid polity an empire.

Whether the elaborately explained categories of empire so punctiliously analyzed by the author, or his graphs, charts, and dazzling equations will tell the historian anything about why Lithuania rose, and why its imperial drive faltered, however, is another matter. While cliometrics can undoubtedly tell us something, the quality of the data that can be obtained from medieval Lithuanian sources is often poor as Norkus admits and much of the discussion is therefore highly schematic. One of the crucial criteria that Norkus uses for his definition of empire is size. On paper, the case seems unanswerable, and he uses maps that show Lithuania stretching from the Baltic to the Black Sea. This is problematic. Nineteenth- and twentieth-century historical cartographers were often highly political in their presentations of "states," portraying neat borders whose relationship to reality is questionable, in particular in the vast, thinly populated lands of medieval Eastern Europe. The fact that grand duke Vytautas once built a fort on the site of, or near to, modern Odessa, on the other side of the largely empty steppe, is hardly enough to justify the impressive map on page 202 of Lithuania in 1450. After his crushing defeat by the Tatars on the Vorskla in 1399, Vytautas was in no position to exercise any control over much of the lands south of Kyiv, and to suggest that the Grand Duchy did so in 1450 is dubious at best, and retrospective fantasy at worst. A claim to territory did not imply control. It is data derived from this map, however, that feeds Norkus's cliometric equations. An emic historian may be pardoned for a degree of skepticism about the results.

For a historian of this period, there is far too much talk of "states," which are treated as actors, to enable International Relations approaches to be applied. It is not individuals who act, it is "states," though on what basis "Lithuania" is deemed to be a political actor is never made clear. Norkus is aware of the problem, and at times prefers, sensibly, to use "polity" in place of "state," but the problem remains. The book is about Lithuania, but Lithuanians are curiously absent from its pages, except as statistics, and except for rulers, whose actions are judged without any attempt to understand the mental world of the late medieval period. There is no consideration of the nature of lordship, which is far more relevant to the strategies of Lithuania's rulers than the anachronistic modern notion of indivisible sovereignty. To end with a tu quoque, there is no attempt to engage with the frameworks in which historians have attempted to explain the policies of late medieval and early modern rulers. The classic work of Susan Reynolds and many others on the nature of royal power and political community in medieval Europe is ignored, as is the influential concept of composite monarchy developed by John Elliott and Helmut G. Koenigsberger, [3] which takes far more account than Norkus does of the messy reality of politics in an age in which dynasty was more important than nation. Scholarship cannot, of course, be directed solely by the mental world of the past, but it must take account of it.