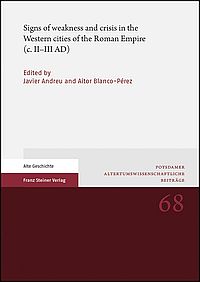 Language is not innocent: crisis? weakness? transformation? These have been some of the terms used to describe the evolution of the Roman Empire from the late second century until its virtual disappearance as a unitary and globalized system in the fifth century. It is necessary to ask to what extent the nomenclature used by researchers has hindered or determined the understanding of complex and very varied processes in different spheres of life of the communities involved. Experiences are also very varied according to territory, especially insofar as the socio-economic balances themselves have shifted from one province to another over time (e.g. Africae, Gallia Belgica). The reading of these dynamics from the vision expressed by contemporary authors, although fundamental to understand their contexts, has given origin, sometimes, to a somewhat flat and simplistic vision, especially of the urban phenomenon. In a history excessively conditioned by political and military facts - with usurpations, purchase of access to power, increasingly strong provincial voices - we have already seen, at the end of the second century AD, the beginning of a crisis, about which it is necessary to reflect and question.

If for the analysis of these complex situations, one starts from the standardized parameters of the prosperity of the high-imperial period, pre-established and subjective, one runs the risk, irremediably, of making a negative reading of everything that distances itself from that ideal. A somewhat sceptical phase about the existence of the crisis of the third century has been followed by a more measured and balanced one, in which the present volume is framed, concerned with a better characterization of the phenomena. As has happened with other processes such as "Romanization", the question lies in identifying more realistically and less conditioned by our contemporary modes of thought and behaviour, the parameters that, at any given moment, allow the interests and forms of expression of a society to be measured. Thus, in an approach to historical structures in terms of long-term and causality, an attempt is being made in recent years to identify the catalysing factors of this crisis. Undoubtedly, to the extent that the Roman Empire had the city as the basic unit of administration and organization and that the rural sphere itself pivoted around it, in the urban world there are clear indications for the monitoring of the transformations: in the maintenance of institutions, the means of civic expression, building capacity, the continuity of supply to urban communities, transport and long-distance trade present in mass imported products, the ownership and exploitation of land, etc.

The volume now edited by J. Andreu and A. Blanco-Pérez insists on a good part of these burning issues, thus contributing to provide valuable data for the enrichment of an open debate. Among their main contributions, they undoubtedly draw the attention of the research community to this interesting and attractive period of transition.

The volume is the continuation of another one that, in Spain and Spanish, was published in 2017 (J. Andreu ed. 2017: Oppida labentia) and was dedicated to the same theme of the transformation of municipal life from the end of the 2nd century. In this sense, to the extent that both volumes, which are very close in time, contain varied approaches to this common argument, they should be understood more as complementary than as a reflection of the evolution and progress of research. This is a good example of the growing interest, in recent years, in the indicators which, since Antonine times, have begun to speak of a certain fragility in the, until then, precise machinery of the Roman Empire.

For the internal organization of the contents, a differentiation in two big sections has been chosen: the general questions and the case studies. Here too, although each work makes sense in itself in an autonomous way, a more coherent arrangement could have been followed, from the most general to the most specific arguments, both in terms of the object of analysis and the spatial approach. N. Purcell and A. Blanco-Pérez's are general; L. Martínez de Morentín's is referred to the West and J. Andreu, J. Martínez and D. Espinosa's are limited to Hispania. Something similar occurs in the section of case studies where perhaps, once again, the more global study by L. Brassous -which we do not see as a case study- could have opened the series, followed by the regional approach to the Southern Plateau (J.F. Palencia), to conclude with the examples of specific cities, five in all: Sisapo, Carthago Nova, Lucentum, Segobriga and Iulia Lybica. In a volume, so restricted to the unique and already sufficiently problematic dynamics of the transition between the 2nd and 3rd centuries, one might wonder about the usefulness of chapters devoted to the very complex and long late antiquity, even more so insofar as they are limited to specific regions: the Ebro Valley (P. Diarte) and the Lusitania (A. Carneiro). In any case, they should serve as a culmination to the volume and address, perhaps with a broader perspective, the extent to which the effects of the processes that have been started before are recognized. Finally, let us consider that the eventually interested reader should be warned, already from the title, that the almost exclusive focus of the volume is the Hispanic provinces (eleven of fifteen studies, plus four general ones). A very limited "West", therefore.

In the different contributions, the aim is to study in-depth those indicators that are more sensitive to change and which, until now, have served as clear indicators of civic prosperity: fundamentally, epigraphic practice and building activity; by extension, linked to them, the evergetic initiative. Both are the basis for a significant part of the readings of the decline of urban capacity since the end of the second century. Although all this indeed denotes a transformation concerning to the previous dynamics, it is also necessary to question eventual changes in the means of citizen expression that do not necessarily imply a loss of vitality of the urban communities. This seems to be evident from the archaeological record, which is not always a faithful reflection of the municipal administrative structures, their management capacity, or their disappearance.

Following the path of other previous works, this volume continues to deepen in a period of growing interest for researchers: the passage between the second and third centuries. Its attraction lies in being considered as a prelude to the deep transformations that would end with the dismemberment of the efficient Roman system. Studies included in it, rightly focus on the most sensitive environment for detecting changes: the city. Therefore, special interest is given on this occasion to the archaeological characterisation of urban transformations. Contributions such as this are necessary for the understanding of a history of antiquity that is less based on facts and more on processes, with their ruptures and continuities.