Jennifer Ratner-Rosenhagen: The Ideas That Made America 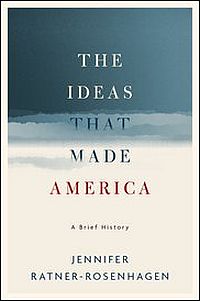 Pursuing a concept of intellectual history that relates ideas to the historical contexts in which they emerged and functioned, this book offers a well-written and accessible overview over recurring themes, basic developments, and major problems of U.S. intellectual history. In its conceptual foundations, its themes, arguments and structure, the book is indebted to three recent academic developments. Firstly, the linguistic turn, poststructuralism, and the New Historicism have forced intellectual historians to go beyond a bloodless history of 'men and their ideas.' Secondly, the so-called New American Studies, featuring the multitude of social groups making, experiencing, suffering, and interpreting U.S. history, does no longer allow for linear master narratives of U.S. intellectual history focusing on male, white, Anglo-Saxon Protestants. The ideas making America that Ratner-Rosenberg presents in her account are thus a colorful spectrum of competing ideologies, visions, and voices struggling with the idea of America. Thirdly, the book embraces Transnational American Studies insofar as it puts an emphasis on the circulation and exchange of ideas across spatial, temporal, social, and cultural borders.

The book is chronologically ordered. In eight chapters of roughly 20 pages each and an epilogue, it traces the history of ideas, intellectuals, and intellectual movements in the U.S. a from its colonial beginnings to today. Each chapter surveys the intellectual landscape of the period under discussion, giving the reader a rich wealth of reliable and precise information about important thinkers, their main ideas, basic texts, and historical contexts.

Chapter one deals with the colonial period up to 1740. It elaborates on the challenges that the 'discovery' of America posed to early modern European knowledge systems, reconstructs the role of American Indians as 'significant others' for European settlers, and features Puritan New England as the region in colonial British North America that produced an important intellectual tradition of lasting effect.

With chapter two Ratner-Rosenhagen reflects the intellectual developments in America in the context of the transatlantic Enlightenment from 1741 to 1800. She points out that the Enlightenment in America did not develop against religion, discusses the idea of America as a land of applied Enlightenment, and highlights the limits of the Enlightenment's application in connection with women and slavery. Treating the situation of women and slaves as a mere contradiction of Enlightenment ideals, the author could have been sharper in her reflections on how the Enlightenment itself produced new patterns of exclusion that became manifest in the treatment of women and slaves. Finally, the chapter features the American Revolution as an event fundamentally driven by ideas but confines itself to Thomas Paine's writings only. Neither the Declaration of Independence nor America's constitutions are being discussed as key manifestations of American intellectual history.

The intellectual developments from 1800 to 1850 are the subject of chapter three. It elaborates on the diverse attempts to create genuinely American intellectual traditions that culminated in American Transcendentalism. Furthermore, it traces the formation of a 'Southern mind,' sketches the feminism emerging in this period, and discusses the attempts of theologians to mediate between the Enlightenment philosophy and the Christian faith. Christianity here only surfaces as rational and liberal Christianity; I missed a discussion of the effects the Second Great Awakening and evangelicalism had on American intellectual history.

In chapter four Ratner-Rosenhagen scrutinizes the period from 1850 to 1890. Her account centers on the challenges emerging from Charles Darwin's theories, arguing that their concept of a purposeless universe shattered beliefs about the free will and the possibility of a shared morality in a pluralistic universe.

Chapter five traces the transformations of American intellectual life between 1890 and 1920. It puts a special emphasis on Pragmatism, which together with Transcendentalism, is seen as the "most important and influential philosophical tradition ever produced in America," (103) and it discusses Progressivism as a translation of Pragmatism into politics. Finally, it reconstructs how American intellectuals tried to come to grips with the U.S.'s migration-driven new ethnic pluralism around 1900.

The period from 1920 to 1945 is the subject of the sixth chapter. It addresses eugenics as pseudoscience supporting racial bigotry, discusses the expatriate "Lost Generation," and the Harlem Renaissance. Furthermore, it unearths the intellectual underpinnings of the New Deal, and reflects the impact of intellectual exiles coming to the U.S. during the 1930s on the development of social and political theory in the U.S. after 1945.

Chapter seven describes the 1950/60s as a period of both intellectual suffocation and a spectacular widening of intellectual horizons. In this period, U.S. intellectuals reflected liberalism as the consensual core of American culture, were open to French existentialist thought, and discussed especially Eastern religions (Buddhism, Hinduism) as a response to the modern spiritual disenchantment culminating in World War II.

In chapter eight the author probes into the intellectual history from 1962 to the 1990s. The period's paradoxical intellectual landscape is circumscribed by a series of highly influential but contradictory texts reaching from the Port Huron Statement to Milton Friedman's Capitalism and Freedom. The chapter puts due emphasis on the reception of Postmodernism, whose anti-universalism and anti-essentialism were particularly attractive to U.S. intellectuals in this period. While Pragmatism, as Ratner-Rosenhagen argues, had prepared Americans intellectually for Postmodernism, the civil rights struggles of the 1960s made them socially and politically ready to embrace the premises of this intellectual movement coming from France. However, Ratner-Rosenhagen also points to the many moral and epistemological problems that postmodernism's anti-universalism and anti-essentialism created, especially in relation to the idea of universal rights.

In all, Ratner-Rosenhagen has written a highly informative, knowledgeable, reliable and problem-conscious overview over American intellectual history. It can serve as a good introduction for newcomers to the field, while, at the same time, providing a sound basis for further investigations into the themes discussed. The book's notes, bibliography and index make it a valuable research tool in this regard.