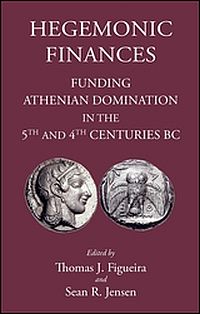 Most of the eight papers in this collection originated in a panel organized by Thomas Figueira for a conference in Edinburgh in 2010. The title of the book is slightly misleading, as several of the papers touch on Athenian imperial finance only tangentially.

In the opening essay, "Periklean Imperialism and Imperial Finance in Context" Loren J. Samons II, presents a broad overview of Athenian expansionism that he shows had developed already in the 6th century and was ultimately driven by a collective sense of Athenian superiority, as expressed in the Periklean Funerary Oration in Thucydides. [1]

Two of the papers deal with the tribute lists specifically. Sean R. Jensen's "Synteleia and Apotasis on the Athenian Tribute Lists", reviews in detail these two terms, which applied respectively to groups of two or more communities that made a single tribute payment to Athens and the disbanding of such groups into separately paying tribute entities. Past scholarship has supposed that the creation and dissolution of such groups were Athenian impositions intended either to increase income or to weaken local centers of power. Finding neither explanation convincing, Jensen concludes that they were in all likelihood the pragmatic outcomes of negotiations between the cities and Athens in facilitating tribute collection and payment.

Moving beyond conventional, textual investigations of the tribute list fragments, in "Patterns in Variation in Tribute Assessment", Aaron Hershkowitz reports on his initial results from entering the lists' statistical data onto Excel spreadsheets for computer-assisted analysis. He offers pages of precisely documented observations about trends in increasing, decreasing, and stable tribute assessments by periods, regions, and relative sizes of assessment, thus greatly expanding the amount of evidence for historical interpretation.

Thomas Figueira's "The Aristeidian Tribute and the Peace of Nikias" is an exhaustive inquiry into the events that led up to the conclusion of the Peace between Athens and Sparta in 421 and the meaning of the "tribute of Aristeides" in one clause of the Peace that six cities, formerly allied with Athens, although now autonomous, were to pay to Athens. Figueira reasonably concludes that the reference to Aristeides' tribute probably meant no more than "to have been the tribute that was being levied contemporaneously by the Athenians in accordance with authority and practices that descended from the foundation of the Delian League and from the original assessment associated with Aristeides."

Two papers with a regional focus cover a broad range of issues involving local relationships with Athens. These are "Karystos in Euboia and Attic Hegemony", based on unfinished work by the late Malcolm B. Wallace, and "Phoroi, Syntaxeis, and Loans from Delian Apollo: The Cyclades under Athenian Financial Imperialism" by Grégory Bonnin. The latter is the only essay in the collection that has anything to say about the "voluntary contributions" (syntaxeis) of Athens' second maritime league of the 4th century.

Brian Rutishauser's "The Wealth of Metics and Athenian Naval Power" is also concerned with Athenian naval funding in the 4th century but from internal, rather than hegemonic resources. In a survey of the ways that affluent metics contributed, he notes that they regularly paid eisphorai, were sometimes hired as replacement commanders at sea, and at least from 366 down to the end of the century appear in epigraphic documents as bonafide trierarchs.

The contribution of William S. Bubelis, is entitled "Imperial Numeracy? Athenian Calculation of Some Imperial Taxes". It is an intricate and ultimately unsatisfying effort to determine why the Athenians chose and expressed fractions of taxable or collected sums (e.g., the 1/60 or mina owed to Athena from each talent of paid tribute) the way they did, given that most such fractions, whether or not they pertained to imperial income, could be expressed in a decimal or (like the denominations of Athenian coinage and measurements of capacity) a sexagesimal computational basis. In the end Bubelis is unsure, but has shown at least how intractable the question is.

Altogether, these are specialist papers written for a specialist audience at a time when traditional views of Athenian imperialism are being refreshed with new perspectives and understandings.

[1] Samons is not the only historian to have recognized that Athens' imperialistic ambitions were in evidence before the Persian Wars. See J.K. Davies: "Corridors, cleruchies, commodities, and coins: the pre-history of the Athenian Empire', in: A. Slawisch (ed.): Handels- und Finanzgebaren in der Ägäis im 5. Jh. v. Chr. - Trade and Finance in the 5th c. BC Aegean World", Istanbul 2013, 1-24. L. Kallet: "The origin of the Athenian economic arche." in: Journal of Hellenic Studies 133 (2013), 43-60.