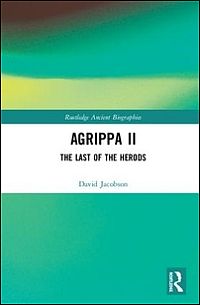 King Agrippa II, the last of Herod's descendants, is usually associated with the first rebellion of the Jews against Rome (66-73 CE), as he frequently appears in sources in the context of the events preceding the outbreak of this war as well as during it and in its aftermath. And yet to date there has been no biography written about this figure (not including entries in encyclopaedias and chapters in books about Herod's family) [1], although studies of other members of the family have appeared. [2] A book by David M. Jacobson, a well-known scholar of the history of Judaea in the Hellenistic and Roman period, has the chance to partially fill this gap.

Most of our knowledge about the life and works of Agrippa II in the period until the end of the uprising comes from Josephus. In common with other Roman authors, he did not write a great deal about the later fortunes of this ruler. Although the New Testament contains a few references to Agrippa, these too lack details giving much of an insight into his biography. In general, information about this ruler is scant in comparison with what we know about the lives of some of Herod's other descendants. The author therefore faced a difficult task when it came to present his biography.

In addition to a concise Introduction (1-4) and the Conclusions chapter (137-144), the book consists of seven chapters and two extensive appendices. Since most details concerning Agrippa II's life come from Josephus, who had social connections with the ruler at the time when he was writing Bellum Judaicum, many scholars have doubts about the objectivity of his portrait of the ruler. So significant an issue is this that the author devoted an entire chapter to discussing it ("The reliability of Josephus as a historical source for Agrippa II", 5-15). But regardless of criticism of Josephus as a source and reservations concerning his lack of objectivity, it is hard to escape the fact that his book is the only available source. The next two chapters describe Agrippa's youth and the beginning of his political career ("Agrippa's early years", 16-33; "Agrippa II in his patrimony", 34-59). In the latter, the author presents the ruler's activity in the years 53-66 CE in the light of the situation at the time in Judaea and Jerusalem itself. The reason for this is that in describing this period in the history of the Jews, Josephus concentrated most on the events played out in Judaea, Jerusalem and around its temple. Yet this is not to say that the Holy City was the only arena of Agrippa II's activity. It can also be tracked in his own dominion, encompassing Trachonitis, as well as beyond its borders. The data provided by archaeological excavations shows that in Caesarea Philippi (whose name he changed to Neronias in Nero's honour c. 60/61 CE (Josephus, AJ 20.211), from 53 CE his new capital, he built a substantial residential quarter (cf. 49-50). The inscriptions found in Beirut, meanwhile, demonstrate his commitment to the urban development of the colony of Roman veterans located there (AE 2006, 1578; cf. Josephus, AJ 20.211-212). [3]

Scholars usually interpret Agrippa's attitude towards the increasing social and political tension in Judaea and Jerusalem in the 60s CE through the content of the speech he gave to the inhabitants of Jerusalem in the days preceding the outbreak of the rebellion (Josephus, BJ 2.345-401). This analysis tends to be accompanied by the question of the extent to which the passage from Josephus conveys the ruler's words accurately, and how much is his own literary creation. The next chapter concentrates on this issue ("Agrippa's address to the population of Jerusalem", 60-66). In the author's view, the fact that Josephus presented his manuscript to Agrippa for evaluation proves that the content of the speech presented by the historian contains opinions expressed by the king, although in the form we are familiar with it is certainly a literary work. [4]

The next two chapters present the course of events in the initial phase of the rebellion and the role played by Agrippa II ("Agrippa II in the opening phase of the Judaean-Roman War", 67-85) as well as the Roman military campaigns against the rebels from the beginning to the end of the war ("From the campaigns of Vespasian and Titus to the conclusion of the War", 86-120). In describing these events, the author follows Josephus' narrative, but supplements it with archaeological data from excavations in cities which were the scene of fierce battles (Gamla, Jotapata), which he compares with the historian's account. Chapter 8 is devoted to the last decade or two of Agrippa II's life ("Agrippa's activities in the aftermath of the War", 121-136). Reconstruction of a picture of this period of his life is made possible by several references by Josephus and other Roman authors (Suetonius, Cassius Dio), and particularly by epigraphical and numismatic evidence. Although these sources do not contain very much biographical data, they reveal his position towards Rome and shed some light on his rule, certain administrative structures of his state and the nature of the society he reigned over. This is without doubt one of the most interesting chapters in the book, as it is the first time that the epigraphical and numismatic data dispersed throughout numerous publications has been collected and interpreted. One of the author's most important findings is worth mentioning here, which is the probable date of the king's death - a subject which has long been the focus of speculation. Based on various evidence, especially epigraphical, the author dates this event to 94/95 CE (133). This date is important for the further history of the lands belonging to Agrippa II's kingdom, which after his death came under Roman provincial administration.

The two appendices at the end of the book without doubt also merit a separate mention. The first, written by D. Graf ("Inscriptions relating to the reign of Agrippa II", 145-171), is a corpus of translations of several dozen Greek inscriptions from places including Abilene, Auranitis, and Trachonitis, which were all part of Agrippa II's state (145-167), as well as concise information about the content of several dozen Safaitic inscriptions concerning this ruler (167-171). Some of the Greek inscriptions have been known for a long time, but many new ones from the area of Hauran are here presented for the first time in English translation. [5] Particularly interesting are those containing the names of officers serving in cohors Augusta (156-159). The identification of this unit has long been the subject of debate, as one with the same name is mentioned in the New Testament (Acts 27,1). Analysis of the content of these inscriptions suggests that these are indeed two different units. The coh. Augusta mentioned in the inscriptions was probably a detachment of Agrippa II's own army, whose name was no doubt meant as an expression of loyalty to Rome, whereas the coh. Augusta referred to in Acts was a regular auxiliary unit of the Roman army. In this case, this would be the first known evidence of the practice of vassal rulers naming their own units in the Roman fashion. In the second appendix, "The coinage of Agrippa II", 173-196, the author discusses the main types of coins, analyses their iconography, problems with dating specific issues as a result of the use of a non-uniform system for counting time in Agrippa II's state (two eras, with five years between their beginnings), and presents hypotheses concerning their denominations based on analysis of the differences in weight of the various types of coins.

The book contains a certain number of minor lapses. Some of them are general, and thus worth mentioning here. On page 32, the author writes that Syria "[...] was governed by a legatus Augusti pro praetore, that is a legate of the emperor, with the rank of praetor [...]", which is imprecise, as the governors of this province were officials of consular rank. It is also hard to agree with the opinion (105, note 324) that the countermarks with the names of legions placed on local coins were used for propaganda purposes. This practice was dictated above all by the need for official confirmation of the value of the local money paid to soldiers when there was a temporary shortage of money from the state mints. [6] Furthermore, despite the length of the book's bibliography, it lacks a number of important publications.

David M. Jacobson's book hardly fits the category of a classical biography; it would be better to title it "Agrippa II and his times". The reason for this is the rather limited resources of biographical data referring to various periods of the protagonist's life. Nevertheless, we should stress that the author illustrates the life and activity of Agrippa II using a very broad range of evidence - not only the well-known literary ones, but also archaeological, epigraphical and numismatic - and without doubt this considerably increases the value of his arguments and conclusions. The diversity of the sources means that the book avoids slavishly following Josephus' narrative. Overall, the portrait of Agrippa II the author presents is so interesting that the book can be recommended to a wide range of readers.

[3] See also Rudolf Haensch: The contributions of inscriptions to our knowledge of the Herodian dynasty, in: Scripta Classica Israelica 33 (2014), 105-111.

[4] "Even if Josephus did not carefully record what was actually said at the time by Agrippa and afterwards embroidered the king's oration with his own views, surely, he would have remembered the principal themes and arguments used in original speech. In that sense, he ought to be given some benefit of the doubt in representing Agrippa's own position on the futility of standing up to the might of Rome. This may mean that Josephus merely dressed up Agrippa's speech in his own style and embellished it with his interpretation of the crisis, profiting from the benefit of hindsight. The fact that Agrippa was sent a copy of the Bellum Judaicum manuscript to review and the king gave it his approval lends credibility to that point of view" (60-61).

[5] A critical edition of the Greek text of all these documents will be published in vol. 16 of "Inscriptions grecques et latines de la Syrie", edited by Annie Sartre-Fauriat and Maurice Sartre.