Nathanael J. Andrade: The Journey of Christianity to India in Late Antiquity 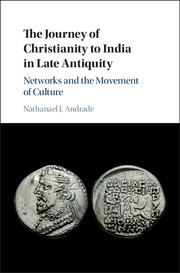 Andrade focuses on the arrival of Christianity to India through social networks. The Preface addresses issues such as the notion of "religion" in antiquity and the "parting of the ways". [1] Part I studies the Acts of Thomas and their impact. They were composed in Syriac, but the Greek appeared early (27,29). Most scholars deem the Syriac original; Lautaro Lanzillotta deems the original Acts a Greek text of the II century. [2] Andrade thinks of a Syriac composition of the mid-late III century, especially for Acts I-II, as the Greek depends on Syriac in the use of silver measured by weight - common to the Hymn of the Pearl - as well as the title στρατηλάτης for στρατηγός, which reveals a Syriac Vorlage, rab ḥaylā (37-42).

Thomas is sold as a slave by Jesus to the Indian merchant Habban (31, 217). [3] Interesting parallels concerning social justice occur with the Liber Legum Regionum. Andrade cites it in my edition and refers (37) to my discussion of such parallels. [4] I concur on the probable origin of the Acts in Edessa (37), confirmed by the translation of Thomas' relics to Edessa. For Andrade, the author of the Thomas Acts has little knowledge of India apart from Gudnaphar, while the Acts of Mari provide a precise itinerary (45): I found historical traces here. [5] The datings accepted for the Doctrina Addai, early V century, and Acts of Mari, VI/VII century (148), coincide with mine. [6] These trace a Christian movement to Khuzistan and Fars (164-165).

I agree that Origen knew the tradition on Thomas in Parthia more than the Acts' Indian story (34,51,61). For Andrade, the Thomas Acts lack historical reliability but influenced subsequent Christians' perception of the spread of Christianity in India (235). Christianity arrived to South India thanks to Sasanian merchants only in the V century (212, 221), as the Chronicle of Se'ert attests (143). Andrade re-dates Thomas Kinayi's mission, from lower Mesopotamia to the Indian Kerala, from the IV to the VIII-IX cent. (211). Indian oral traditions may derive from the Acts (65, 208), although this is not demonstrated. [7]

The Thomas Acts "contain an assortment of preexistent invented traditions" (50): preexistent surely, invented not (all) necessarily. The Edessene tradition moved Thomas from Parthia to India (50), so as to assign Parthia to Addai. Addai in a tradition was sent by Thomas, to create a Thomas-Addai link (sometimes "Thaddaeus called Thomas"), later Thomas-Addai-Mari, Mari being Addai's disciple. [8] Andrade thinks that the Parthian Acts influenced Bardaisan in supposing that Christians were in Bactria, Parthia, Media and Persia (52, 162). Bardaisan adds India and the Seres: was he influenced by the Indian Acts? Only his account of Christianity in Edessa and Hathra is reliable (146). Truly he is reliable here; [9] perhaps also elsewhere.

The Acts influenced Origen who says that Christianity reached the Seres in the late Commentary on Matthew (63). I do not exclude he was influenced by Bardaisan or other sources. Arnobius, stating that Christianity arrived to India and the Seres, depended on Bardaisan or the Acts. [10] The Chronicle of Arbela is not used due to uncertain authenticity. [11] Fine. Andrade gives credit to late Sasanian, early Islamic sources for earlier times (143-45), but refuses it to imperial (Bardaisan, Origen) and late antique Christian sources, deeming them necessarily based on the Thomas Acts.

Andrade accepts my reconstruction and dating (early III century) of the Edessan Abgar tradition, citing my works (55). I suggest the local source who extols Abgar Ukkama may have been Bardaisan. Andrade adds that the Indian Acts (56) may have been composed in the late III century under the influence of the Edessene source, to reserve Mesopotamia for Addai. He brings Palmyrene inscriptions and epitaphs to bear on research (5, 7, passim). Habban's name is Palmyrene (45). Sources are acts of apostles, divisions of apostles, church histories, novels, Manichaean accounts. I add the Acts of Mari - maybe a counteraction to Mani's mission [12] - and the Doctrina Addai. Aphrahat is used as a historical source (157). He may have known Mara's Letter and Bardaisan. [13]

Part II argues that the Mediterranean-India network, analysed including epigraphical and papyrological sources and the Periplus Mari Erythrei, did not carry Christian culture to India - only to Ethiopia - because it had not yet enough Christians (merchants, sailors, residents) when it extended to India in the I-III century. [14] Though, it was based at Alexandria and Pantaenus' reported mission to India was from there. It was restored after 500 (205). Leonardo Gregoratti (unknown to Andrade being too late) [15] outlines Chinese sources which discuss Parthian trade networks in the Indian Ocean in the "dead" period.

Cosmas, circa 550, describes India showing first-hand knowledge (134-5), which is correct, but treatises and embassies until Antoninus Pius or Marcus Aurelius are declared to be historically unreliable (123-125). One might detect a circularity of argument here. For Himanshu Ray (unknown to Andrade for chronological reasons), [16] the (maritime) Indian Ocean trade routes in the I-IX century were based on religious activities, including visits to religious establishments; this network cannot be separated from religion.

In early Christian texts, "India" could mean Ethiopia, South Arabia, or India; [17] late antique authors could misinterpret earlier sources on the evangelization of "India". Maybe even Pantaenus travelled to Ethiopia, described as "India" by Eusebius' sources, and Eusebius misunderstood (89). My doubt is that Eusebius relied on Origen-Pamphilus, who knew Pantaenus well. Andrade thinks that Bardaisan never met Indian ambassadors or reflects a visit that occurred in Rome (141-142, 215). But the statue vertically androgynous described in fragments of his De India preserved by Porphyry, corresponds to the statues found in India. Bardaisan praised Brahmans there, which points to India. [18]

Andrade is open to the dating of the Letter of Mara Bar Serapion to late I-early II century and its knowledge of Greek philosophy (152), especially Stoicism, which I supported in studies he cites. [19] He states that, in three articles he cites, Ramelli "cogently presents the existence of an organized church at Edessa by c. 200 CE" (150), based on the Chronicle of Edessa and Bardaisan. Andrade accepts the historical value of the Epitaph of Abercius (151) and cites my works on it. [20] He also agrees with me that Bardaisan's work On Fate was similar to the Liber legum regionum (151). Eusebius may have cited Bardaisan also in his history of Edessa. [21]

Part III investigates the movement of Christianity to Sassanian Persia [22] and the Hymn of the Pearl's importance in the network before the IV century (193). Maes Titianus around 100 CE never travelled to Central Asia, but Mani travelled to India. Frumentius and Aedesius evangelized Aksum, although their imitation of Metrodorus and their trip to Tyre between India and the return, point to India. [23] Frumentius' destination, τοῖς πόρρω Ίνδοῖς and τὴν ἐνδοτάτην Ἴνδιαν, may mean not "the Indians far away from the Parthians" (87), but the Indians farther than the Parthians.

Andrade knows much important scholarship; I am delighted and honoured to see sixteen works of mine. Perhaps the book has too much pars destruens and little pars construens, and some scholars might disagree on methodological or other points, but this is an interesting and instructive read.

[15] The Role of Parthia, in: The Indian Ocean Trade in Antiquity, ed. by Matthew Cobb, London 2018, ch. 3. The unity in IV-century Mediterranean trade is underlined by Taco Terpstra: Trade in the Ancient Mediterranean, Princeton 2019, ch. 4.