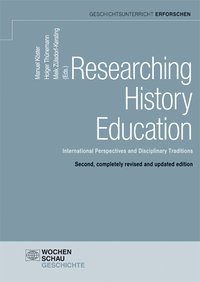 Over the last decades, history education has become a rapidly growing, lively and prolific field of research. This is of course commendable in itself, but it also represents a challenge: keeping tab of the never-ceasing stream of books and articles is more or less impossible. Add to this the fact that history education research, which often focuses on national school systems and has a natural readership that consists of those working within that system, is not necessarily published in English, the current lingua franca of the academic world.

It makes sense, therefore, to put together a thorough overview of the field, its current state as well as its traditions, both national and disciplinary. Considering the rapid development it also makes sense that a second, revised edition of "Researching History Education", edited by Manuel Köster, Holger Thünemann, and Meik Zülsdorf-Kersting and originally published in 2014, was released in 2019.

The degree of revision varies considerably among the twelve contributions, from a complete rewrite (Mario Carretero & Everardo Perez-Manjarrez: "Historical Narratives and the Tensions between National Identities, Colonialism, and Citizenship") to just adding a few more references (Peter Gautschi: "History Education Research in Switzerland"). In most cases, paragraphs or whole sections were added, while the core structure of the chapters remained unchanged.

The twelve chapters cover research from 14 countries in Europe, North America and Hispanic America. They thus relate to different national contexts, and the research covered also represents various scholarly traditions as well as a variety of theoretical and methodological frameworks. The guidelines given by the editors - that the history of history education research, significant methodology and research, and research desiderata should be considered - have been interpreted differently and followed more or less strictly by the contributors. As a result, the volume might be described as sprawling.

One may argue that this simply reflects the richness of a heterogeneous research field and that each chapter, taken for itself, provides valuable knowledge. Even so, the voices of the contributors remain scattered. There are of course exceptions - a good example is the aforementioned chapter by Carretero and Perez-Manjarrez. Not only does their chapter locate the presented research in a theoretical context, it can also be read as part of a dialogue with Esko Nikander and Arja Virta's chapter on currents in Finnish history education research, which, thanks to the revision, also addresses the challenge of handling different historical perspectives in multi-cultural societies.

Multi-perspectivity and multi-culturality, also touched upon by Penney Clarke when she discusses the links between history and identity with examples from francophone Canada, have become ever-present topics in history education in many European countries and there are also frequent examples of how history education and history curricula have become politicised when governments have tried to appease xenophobic pressure groups. There are other current topics of interest touched upon in the various chapters: Penney Clarke addresses the issue of assessment in history education. Nicole Tutiaux-Guillon and Didier Cariou paint a picture of French history education research as a neglected stepchild, not fully accepted by historians or by teacher education institutions, thus raising an interesting question: if we look at history education research as a Bourdieuan field of knowledge, who strives to control it?

Those are three examples of intriguing research themes addressed - there are others. One cannot help wondering if the editors ought to have kept a tighter rein on the contributors, choosing a few distinct topics of topicality to address. Furthermore, it is also possible to question the volume's subtitle: "International Perspectives and Disciplinary Traditions". It is true that the volume comprises chapters from many countries and three separate continents, but voices from Africa, Asia, and Australia are regretfully absent.

These remarks do not, however, reduce the volume's undisputable value. It gives a thorough overview of the state of the art in the research field. It offers a wide range of references, pointing at books and articles that otherwise might be missed and neglected. It can be a useful resource in history teacher education programs, giving students the opportunity to meet examples of current research trends and to discuss their similarities, differences, and relevance. And yes, even if the first edition already has its place on your bookshelf, the revisions and additions are good reasons for an update.