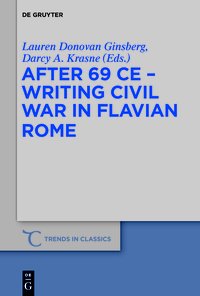 As our editors Lauren Donovan Ginsberg and Darcy A. Krasne note, civil war is a topic of growing scholarly interest. This is particularly true in the case of Flavian literary studies. Ginsberg and Krasne are to be thanked for bringing together a large number of scholars working on diverse texts and topics ranging from architecture to gender and from Josephus to Martial. After a concise introduction detailing the status quaestionis and a working definition of civil war, we are presented with 17 essays divided into five topical sections: Lucanean Lenses; Narrating Nefas in Statius's Thebaid; Leadership and Exemplarity; Family, Society, and Self; and Ruination, Restoration, and Empire. Among all of the fine contributions, a number of individual chapters and overarching themes constitute especially valuable additions to the scholarship: two contributions on Statius and Frontinus along with the volume's sustained analysis of Lucanean intertextuality demand particular attention.

Federica Bessone's contribution makes the novel suggestion that "civil war is not only the central theme of the Thebaid" but also "the decisive impulse for [...] its poetic style" (89). Here, Bessone neatly condenses the literary tradition concerning civil war into a "Roman koine for civil struggles;" on this analysis, the very linguistic units of Latin literature such as Horace's quo, quo scelesti ruitis (Ep. 7.1) become heuristic tools for the investigation of Statius' idiosyncratic style. Bessone concludes that "in Statius, as in Lucan, the writing of civil war is also an internal war inside the epic code" (96). The investigation of style is admittedly not a dominant mode inquiry at the moment, but Bessone's coupling of it with Statian intertextuality points to emerging avenues of interpretation.

Alice König's chapter is also a must-read for those interested in epic or Tacitus. We are ostensibly thrust into a discussion of Frontinus' use of civil-war motifs in the Strategmata. But König in fact is asking a much deeper question of Flavian literature: what if civil war "was a less conspicuous and troubling part" (149) of everyday life in the Flavian period than our scholarship suggests? Her question amounts to an epistemological shot across the bow, encouraging especially scholars of Flavian epic to question not what we know, but how and why we know it. If civil war is not an overt concern for Frontinus the way it is for Statius, is civil war really all that "Flavian?" Are we reading civil war into, rather than out of our sources? No; for as König reveals, civil war always lurks ominously beneath the surface of Frontinus' text. In this way, the "Strategmata in fact reflects and articulates a Zeitgeist" (171) concerned with civil war in a way anticipated by the scholarship.

Flavian intertextuality, particularly with Lucan, constitutes an important strand of ongoing investigation. Our volume reflects this trend and gives key insight into current debates. On the one hand, Marco Fucecchi argues that the Flavian epicists not only "contextualize" but indeed "exorcize" the ghosts of Lucan's civil-war past (28). On his reading, Silius' Cannae is not a disaster indicative of future civil discord; by antiphrastic Lucanean allusion, it is proof that Rome has "the necessary 'antibodies' [...] to face the difficult trials of the future" (32). John Penwill, by contrast, argues that Valerius Flaccus portrays a world at (civil) war with itself, an echo of the worldwide war waged between Lucan's Caesar and Pompey. Penwill renders the dueling prophecies of Idmon and Mopsus as a kind of reading guide: the former indicative of the text's pro-Vespasianic leanings, the latter pointing to a Lucanean outlook on the recurring dangers of civil war (75). For Penwill, the Argonautica echoes Lucan in pointing to the disturbing and seemingly unending link between imperial power and civil discord (85).

The differing outlooks throughout the volume towards civil war, some highlighting reconciliation and others unmitigated upheaval, persists from the first to the last page. Our editors do not attempt to align the "optimistic" readings concerning the Flavians' outlook on civil war and Lucan (e.g. Fucecchi and Marks) with the pessimistic ones (e.g. Stover and Landrey). But as Ray Marks suggests, this ambivalence is a reflection of our current state of inquiry; for instance, it is an open question whether the Flavian authors used Lucan to point to "positive developments in Rome's story" or to the "darker realities in Roman history" (66). For scholars familiar with the topic, this volume therefore offers new insights into Lucan's influence on Flavian literature; for the uninitiated, this is an honest and thorough appraisal of current debates.

While intertextual investigations, especially with Lucan, carry the day in this volume, other important strands of inquiry get their due. Tacitus' reception of his Flavian antecedents is a touchstone throughout the volume. The historicizing readings of Mason, Stocks, and Hulls reveal the Flavian dynasts' attempts to remove the stain of civil war from their family's legacy; the literature suggests such attempts were only partially successful. The contributions of Landrey and Chomse display how even the architectural programs of the Flavian emperors reflect the civil-war past that gave rise to their rule. In a word, there is something here for almost every Flavianist. Some will be disappointed, however, that Statius' Silvae do not receive substantial attention in the volume; indeed, the absence is sometimes keenly felt. For instance, discussion of the civil-war implications of a tiger's furor in the Colosseum at Martial's Sp. 22.4 (403) does not point to the similar dynamics of the word nefas in Statius' depiction of the death of a lion at the games in Silv. 2.5.13. Admittedly, however, collections like this cannot be expected to cover every author or text.

I have only minor complaints for this fine volume. It does display some of the drawbacks inherent to its genre: not all of the contributions grouped together are discernibly cohesive; a few chapters aim at an audience already aware of specialized bibliographies; some scenes (e.g. Silius' Saguntum in Punica 2) receive repeated and disproportionate attention. These minor quibbles aside, this collection constitutes a worthy and timely addition to the scholarship on Flavian literature; our editors are to be commended on bringing together a range of contributions representative of both current thinking and future directions of research. The volume is handsomely produced and includes helpful indices rerum and locorum; typographical infelicities are unobtrusive and exceedingly rare. After 69 CE will be of use to scholars of Flavian epic as well as those interested in the cultural history and legacy of civil war in the Julio-Claudian and Flavian periods more generally.