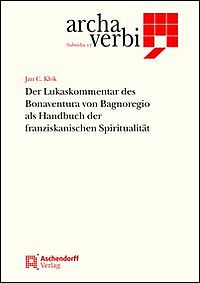 Those who are familiar with the secondary literature regarding Bonaventurian studies over the last two decades are well aware of the dwindling number of monographs and journal articles in German dedicated to Bonaventure of Bagnoregio. The appearance of Klok's study is a most welcome exception to what many scholars consider a disappointing dearth of German language scholarship as the author's own rich and extensive bibliography demonstrates.

The first chapter, as announced, examines the status questionis of the Commentary on Luke. The author correctly notes that scholars have given little sustained attention to this work that Bonaventure's confrere, Salimbene de Parma, described as "pulchra et optima." Missing from Klok's analysis here, however, is reference to Dominic Monti's dissertation treating Bonaventure's hermeneutical understanding of scriptural exegesis. [1] No doubt this is an honest oversight since Klok makes a solid appeal to secondary sources throughout his monograph. Monti's contribution is of particular importance since he echoes Klok's concern with the pastoral dimension of Franciscan spirituality and posits a date as late as the 1260s for the final redaction of the Commentary on Luke.

When it comes to working with the primary sources, Klok reads Bonaventure closely and carefully, and does readers a great service by translating selected texts into German to allow them to "hear" Bonaventure's voice. As a result, those who are unable to read Latin have access to Bonaventure's thought in a refreshing manner that also grounds Klok's specific arguments. In addition to the obvious references to the commentary itself, the author draws on selected spiritual works and sermons of the Seraphic Doctor. In the future, scholars would do well to capitalize on Klok's keen textual analysis by examining the chronology and content of Bonaventure's sermons in relationship to the spiritual themes of the Commentary on Luke. A good place to start would be the Sunday Sermons, since Bonaventure may have redacted them with his secretary Mark of Montefeltro in conjunction with the Commentary on Luke.

Scholars will find this book to be an exhaustive treatment of Bonaventure's Commentary on Luke and requisite reading for those working in the areas of Bonaventurian and Franciscans studies. Klok's study provides a detailed, in-depth examination of the context and content of the Seraphic Doctor's interpretation of the Gospel of Luke in service of the preaching ministry of his confreres. In doing so, the multi-faceted paradigm of the preacher, which Klok delineates so well, exemplifies the spirituality of the entire Minorite Order, given their commitment to proclaiming the Gospel and to follow in the footsteps of Christ.

Of particular interest to preachers and for that matter, anyone interested in Christian spirituality, yesterday or today, are sections 3.4 (Das Unterscheidungsvermögen), 3.5 (Das active Leben), and 3.6 (Das contemplative Leben). When translating the term Das Unterscheidungsvermögen into English, this reviewer prefers to think in terms of the preacher's power of discernment, not discrimination, since the later term is open to misunderstanding. The ability to discern between good and bad, right and wrong, is an ever-present challenge. Klok's attention to this element of Bonaventure's spirituality, which the Fathers and Mothers of the Desert explored in the early Christian centuries, is heartening. Likewise, the discussion of the active and contemplative forms of life in the Commentary on Luke fosters a nuanced appreciation of Franciscan spirituality. Instead of viewing the life of the Lesser Brothers in terms of a choice between the active or contemplative life, or a reductive mixture of the two, Bonaventure understands it as a synthesis proper to the viri spirituals. While this term originates in writings of Joachim of Fiore, it is Bonaventure who retrieves and effectively employs it to clarify the place of the Minorite Order in the Church as Klok adeptly illustrates in the section 1.3.3 (Das Konzept des geistlichen Menschen).

In his summary, Klok's claim that the Commentary on Luke is a handbook for Franciscan spirituality that appeals beyond the confines of the Lesser Brothers rings true. Essential to this affirmation, however, is the author's acknowledgment that the term "spirituality" should be understood in terms of life lived within a community, which shares a common praxis and spiritual worldview grounded in Christ. In this sense, the Commentary on Luke is undoubtably a most excellent spiritual handbook. The claim regarding Commentary on Luke as the continuity of monastic theology remains problematic to this reviewer, since the Victorine school and the Dominican, Hugh of St. Cher, significantly impacted Bonaventure's approach to the Gospel of Luke. In particular, the Victorines, with their pronounced interest in affective theology and urban ministry, are an uneasy fit within the category of monastic theology. Simply put, Klok is correct to argue for the presence of Bernard of Clairvaux and monastic theology in the Seraphic Doctor's commentary, but the Victorine influence, which is recognized by Kock through his monograph, deserves more attention as an independent tradition.

This final observation is not so much a critique, but an invitation to the author of this excellent study to expand his work into the area of Bonaventure's reception of the Victorine tradition. Such a contribution to Bonaventurian studies would be welcomed no doubt by scholars just as readily as this monograph.