Shaun Tougher (ed.): The Emperor in the Byzantine World 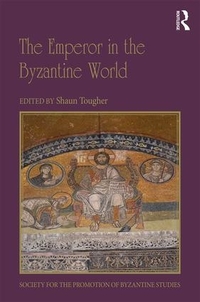 The last twenty years have seen exceptional progress in the field of Byzantine studies: new methods of analysis have been adapted to the historical domain of Byzantium, new subjects have been brought to light, and we are noting with much pleasure the development of certain novel approaches, which are succeeding the more traditional and event driven approaches that characterized the historiography of the last century. As part of this trend of renewal, we find this volume, which includes almost the entirety of presentations made during a Symposium held in Cardiff between the 25th and 27th April 2014.

The figure of the emperor has undoubtedly been a continuous object of study in Byzantinology, especially from an institutional standpoint, since he was often the centre focus of Byzantine politics. However, who was the emperor as a man? While studies have been conducted on women who held supreme power, starting with Ch. Diehl (Impératrices de Byzance, 1960) and continuing with L. Garland (Byzantine Empress: Woman and Power in Byzantium, 1999) and J. Herrin (Women in Purple, 2001) to cite only the most famous works, it was G. Dagron in particular who had turned his attention to the subject with much astuteness in Empereur et prêtre, from 1996, but which was once again focused on the emperor as an institutional figure: The volume of R. Benoit-Meggenis, L'empereur et le moine. Le relations du pouvoir impérial avec les monastères à Byzance, 2017, too recent to have been taken into account during the Symposium, is another attempt at studying power in Byzantium. This is why the Proceedings of this conference deserve the greatest attention.

The volume is divided into five sections: the first section consists of articles concerning the dynasties and imperial families; the second section is dedicated to the emperor's men (The emperor's men. Court and empire); the third covers the duties and ideals of the emperors (The emperor as ruler: duties and ideas); the fourth section of the book covers imperial literature (Imperial literature. Emperor as subject and author), while the fifth deals with the material aspects of the imperial image (The material emperor. Image, space and empire). This division however is not rigorous; certain contributions could be placed in sections other than that in which they were placed, which shows the homogeneity of the book.

Indeed, the different contributions all illustrate the role, which the emperor fulfilled in the Byzantine state system, whether it was in reference to imperial ideology, the establishment of dynasties, or the court. We thus see how several rulers tried to assure the role of head of State to their offspring (M. Humphries, Family, dynasty, and the construction of legitimacy from Augustus to the Theodosians, who studies imperial legitimacy during the first two centuries of the Roman Empire, and its consequences during Late Antiquity: dynasties were to be established on the basis of bloodlines, but also marriages; M. Humphreys, The shifting importance of dynasty in Heraclian ideology); how the court arranged itself behind the basileus (D. Korobeinikov, Byzantine emperors and sultans of Rum: Sharing power?, a contribution, which is of a prosopographical quality and focuses on the Turks of the Sultanate of Rum who had chosen Constantinople as residence, and the relations between the Palaiologan family and that of the sultans; J. Shepard, The emperor's "significant others". Alexios I Komnenos and his "Pivot to the West", according to whom Alexis Komnenos tried to create a "Christian consensus" in order to create some sort of unity in Christendom under the leadership of Constantinople; J. Harris, Who was who at the court of Constantine XI, 1449-1453, who deals with certain shadowy figures from the court of the last emperor of Byzantium). We see what were the duties and ideals of the emperors (B. H. Stolte, Law is king of all things? The emperor and the law, who intends to rapidly explain the relationship between the ruler and the law, based off of the citation by Pindar, "nomos is king", a citation that we find in the Digest, but not in the Basilika: this would have been the result of the efforts of the patriarch Photius to reestablish the balance of power between the Church and the State; F. R. Trombley - S. Tougher, The emperor at war. Duties and ideals, on the connection between the emperor and the management of war). We see the relationship that existed between literature and the imperial functions (J. Vanderspoel, Imperial panegyric, Hortatory or deliberative oratory?, demonstrates that panegyrics were not simply a way of flattering the emperor but also - as one would expect it - a means of sustaining political ideology; O. Prieto Dominguez, The iconoclast saint. Emperor Theophilos in Byzantine hagiography, deals with the emperor Theophilos, whose wife Theodora would have wanted to turn him into an orthodox from an heretic, by converting him on his deathbed; P. Prasad, Splendour, vigour, and legitimacy. The prefaces of the Book of Ceremonies (De ceremoniis) and the Byzantine imperial theory, tries to trace the imperial and dynastic ideology of Constantine VII in the two prefaces of the De ceremoniis, by emphasizing the importance of the transmission of the role of the basileus between father and son; N. G. Chrissis, Ideological and political contestations in post-1204 Byzantium. The orations of Niketas Choniates and the imperial court of Nicaea, who, through the analysis of certain orations of Niketas Choniates and a comparison with certain passages from the Chronikē Diēgēsis, wishes to demonstrate that Choniates was urging the basileus Theodore Laskaris to go to war against the Latins in Constantinople, which the emperor was reluctant to do, and to consider the other Byzantines, of Trebizond and of Epirus, as the members of the same people, victims of the Latin attacks; S. Kyriakidis, The emperor in the History of John VI Kantakouzenos (1347-1354), discusses the History of the emperor John VI Kantakouzenos in order to unveil aspects of imperial ideology proposed by this basileus). Finally, we learn much about the material aspects of the imperial image, which could help visualize the figure of the emperor (A. Walker, The emperor at the threshold. Making and breaking taxis at Hagia Sophia, delves into the decorative scheme of Haghia Sophia, beginning with the famous mosaic above the central doorway of the church, where the emperor [conventionally identified as Leo VI] prostrates himself before Christ, but whom the author identifies rather as Constantine VII; L. Jones, Taking it on the road. The palace on the move, considers the palace not only as the one made of brick and mortar in Constantinople: when the emperor is on campaign, court life, with its ceremonies and rituals, was reproduced in the tents, which sheltered the ruler and his entourage, with all the objects which were part of the "imperial spectacle", and were displayed to visitors).

One last contribution (M. Redknap, Unveiling Byzantium in Wales. Connections and collections) is not devoted to the Byzantine emperor, but to the place where this book has been produced, Wales, where Byzantine finds indicate either contact with the Eastern Empire, or the love of certain collectors.

All these articles discuss the emperor in relation to others, but what is missing is the emperor himself, as a man of power: in other words, the difficult question of how the role determines the human being remains. A very interesting answer is the one proposed by M. Masterson (Revisiting the bachelorhood of Basil II) who studies the celibacy of the Macedonian emperor, which the author ascribes to the homoerotic atmosphere of the court. This contribution brings new light on Byzantine social behaviour, and the arguments presented are powerful and convincing, even if there are certain regrettable lacunae in the bibliography. Another contribution in the same vein is that of M. McEvoy (Celibacy and survival in court politics in the fifth century AD), where the author considers the family of Theodosius, particularly Theodosius II, in order to present their rather closed marriage policy, and the two families of the Anthemii and the Ardaburii, who continued the line of Theodosius. The study of networks of influence, which have been partially drawn up by the author, would have allowed for further information and explanations to be given, but the article is very interesting particularly for those who are interested in the prosopography of the interval between Late Antiquity and the first Byzantine period.

Indeed, the study of networks, a serious subject, which should be accounted for in research, is generally ignored, which as a result prevents us from clearly seeing how the man-basileus had to stand accountable to a certain group of people and therefore change his individual attitude in relation to the expectations of those that supported him: the emperor was all powerful, but in reality he was very much accountable to his supporters.

This book is very useful, as it allows us to draw up an idea of the functioning of the State around the emperor. What remains to be studied is who was the emperor himself, but further research will certainly help us understand more in the future.