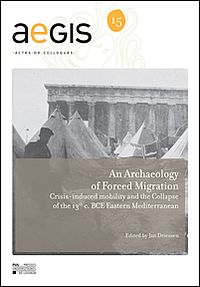 The end of the Bronze Age in the Eastern Mediterranean has received significant scholarly and popular attention in recent years, as is highlighted by bestsellers such as Eric Cline's "1177 BC. The Year Civilization Collapsed", or the magnificent recent exhibition (and accompanying catalogue) in Karlsruhe on "Mykene. Die sagenhafte Welt des Agamemnon". Different factors, including social tensions, overspecialization of the palace economies, and natural disasters are thought to have been at play in the collapse that marked the end of the Bronze Age, though scholars disagree about the precise interplay between these various factors. Recent revolutions in the field of ancient DNA studies (triggered by two seminal papers in 2015 [1]), moreover, have now also flagged the potential importance of (mass) migration in the Bronze Age collapse. The return of 'migration' to archaeological debate is notable, for the concept was long viewed with suspicion (mostly because of its association with diffusionism and related racist ideas). The book that is under review, then, should have been eminently positioned to analyse these various new insights and address the questions that have been raised by new research. To some extent, I am happy to report, this volume does make a valuable contribution to these new lines of enquiry. Yet at the same time, this book also suffers from a lack of coherence.

This problem is immediately apparent when one looks at the volume's table of contents. [2] Whilst the title suggests a focus on the collapse of the 13th century BCE eastern Mediterranean and the role that (forced) migration may have played in that collapse, 6 of a total 20 papers do not, in fact, deal with anything related to the Bronze Age at all. Indeed, various chapters specifically discuss contemporary or relatively recent events, including the current refugee crisis, the Karenni refugee camps of the 90s in Thailand, the Spanish civil war, the Italian empire in Africa or the collapse of the Habsburg empire. Some of these contributions are of a more theoretical nature, some are based on anthropological fieldwork, whilst one particular paper (ch. 5; "Camps and Ruins") struck this reader more as a photo-essay accompanied by activist remarks than as an academic paper. The question rises why these papers (some of which are undoubtedly interesting) are included in this volume. This question becomes especially relevant when one considers the numerous recent discoveries, new theories, technologies and approaches, that are pertinent to the book's purported focus, that could instead have been addressed here.

There thus is a sense of disjoint in this volume. Even when the volume finally does discuss (forced) migrations in the ancient world, the selection of papers sometimes feels haphazard. Chapter 8, for example, a paper by Robert Garland on "Involuntary Displacement in Livy Books 1-5", whilst undoubtedly interesting to Classicists, has limited bearing on this book's purported theme. This chapter especially feels like a missed opportunity, seeing that Garland is a specialist in the field of Greek migrations and surely would have been able to discuss the upheavals at the end of the Bronze Age through the lens of later Greek tradition. And whilst chapter 7, a brief paper by Garny and Tavernier on the so-called Kurustuma Treaty (the earliest known treaty between the Hittites and Egyptians) does at least focus on the Late Bronze Age (the Treaty probably dates to the late 15th century BCE), one is left wondering why the authors choose to focus on this particular text. Due to the fragmentary delivery of the Treaty (bar a single, small fragment, the Treaty is only known through three references in later Hittite texts) it is impossible to be sure as to whether the Treaty does in fact refer to forced migration. The authors themselves note (95) that "forced migration was not an uncommon practice in the history of the Ancient Near East (...) and is logically amply attested in the textual material stemming from this region": why did they not focus on better preserved and better understood texts, that do provide an insight on ancient forced migration, such as Amarna Text 31 (where the Egyptian Pharaoh Amenhotep III asks his Arzawan counterpart Tarhunderadu to send him "Kaska" people), or the Annals of the Hittite Great King Mursili II (with references to thousands of deportees following a military campaign)?

That texts can serve as a useful canvas for archaeological evidence is demonstrated in a number of interesting subsequent papers focusing on 'regional perspectives', including those by Yasur-Landau, Mazzoni, Ben-Dor Evian, and Mittelman. Some papers deserve special mention. Burke's contribution on the end of the Egyptian Empire in the Levant (and its social ramifications in the region), through its integration of theory, archaeological data and textual evidence, could well have served as the volume's introduction. Killebrew's paper on Tel Miqneh was a treat and her suggestion that there is evidence for a new cultural entity, identified (i.a.) by Aegean-style material culture, in Stratum VII - when the hitherto modest village expands into a full-fledged fortified city - seems to match recent aDNA-analyses from Ashkelon. [3]

Where did the bearers of this this Aegean-style material culture stem from? One place may have been Cyprus or perhaps Crete (which ancient traditions link to the Philistines). The evidence for population movement on these two islands is discussed Nowicki. He makes a number of important observations, including the point that many specialists in the field "regard the very concept of population movement and its reconstruction on the basis of archaeological evidence", as 'narrow and outmoded' (117). With Nowicki, I very much doubt whether it makes sense to dismiss a specific research approach on such a basis, especially in the case of Crete. Indeed, Nowicki's argument, that major changes in settlement distribution suggest there was a good deal of population movement going on in Crete, strikes me as eminently feasible. Likewise, his suggestion that the emergence of relatively short-lived "sophisticated fortified citadels" and coastal settlements may have served as bases for groups of pirates (126-143), some of which may have contributed to larger migrations, seems entirely reasonable.

Regardless of these details, Crete hardly seems to have been the only recipient and donor to the migrations that marked the end of the Bronze Age. Chapters 9 to 20 demonstrate that there is, in fact, substantial evidence for the movement of people around ca. 1200 BCE in the eastern Mediterranean, even though their exact nature may elude us: from sites in Greece, such as Megali Koryphi on the island of Aegina, to Tel Miqne-Ekron in the Levant, from Libya to Egypt, and from southern Italy to Cyprus. Most of this is common knowledge, but to have these various regional, sometimes even local, perspectives is surely useful -a sentiment echoed by Cline in the volume's final, synthesizing chapter (314). To this reader's mind, however, the merit of this volume exceeds the sum of its papers, and lies primarily in its stated aim and title: by explicitly addressing the previously shunned concept of 'migration' as a potential major factor in this collapse, Driessen has done the field a great service. For that alone, I am willing to forget about the first six chapters.