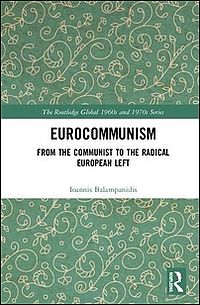 The definition of "Eurocommunism" emerged in the mid-1970s to capture what looked like an ongoing transformation in the communist world, brought forward especially by the Italian Communist Party (PCI) and embraced, with varying degrees of consistency, by other Communist Parties - notably those of France (PCF), Spain (PCE) and Greece (Communist Party of the Interior, KKE Interior). These parties were experiencing a process in which they distanced themselves from Moscow and were attempting to build a new kind of socialism, based on pluralism and democratic principles. In democratic countries, they sought to enter government through a strategy of alliance with other forces: the Socialists in France (in the so-called Union de la Gauche) and the Christian Democrats in Italy (Historic Compromise). As the possibility of a communist accession to power in France or Italy looked ever more concrete (a prospect that agitated the US and Western European powers alike), commentators and political scientists pondered over the antinomies of a current that described itself at the same time as communist and democratic, revolutionary and reformist, internationalist and unrestricted by the traditional loyalty to the Soviet "centre".

Ioannis Balampanidis's book looks back at the rise and fall of Eurocommunism from a dual perspective: that of the defeat of the movement, amidst the decline of international communism and of the post-war compromises championed by various currents of the European Left, but also that of its legacies in the 21st Century radical European Left. Syriza, the party that governed Greece from 2015 to 2019, is a primary reference for his reflection on the latter aspect. Focusing on the four aforementioned Eurocommunist parties, the book follows a thematic, rather than chronological structure. The author first of all provides a historical profile of the Eurocommunist current. Moving from the first emergence of an attempt to reconcile an anti-capitalist thrust with democratic politics and a strategy of alliances, related to those of the interwar "Popular Fronts", he then follows the evolution of the four parties throughout the 20th century. The Resistance movements and the early post-war governmental experiences of the PCF and PCI, destalinization and the global "1968" caesura all represent signposts for the analysis of the crucial phase of the 1970s, the highpoint of the reform tendencies, and of the subsequent fissures and decline of the movement, which coincided with the emergence of post-communist identities.

The second part of the book focuses on a number of political and theoretical questions raised by the Eurocommunist evolution of the four parties. How were relations with the Soviet Union and the international communist movement recast? How did the four parties re-work the Leninist legacy and rethink their relation to the liberal-democratic State? And what distinguished a reformed communist party from a social democratic one? The author's proposed answers to this set of questions are based on an analysis of the parties' discourses and practices. Of particular interest is his reflection on the relationship between Eurocommunism and the State - a classic conundrum which Balampanidis handles in a balanced and competent way. Finally, the book examines Eurocommunism in its (Western) international context. The rise and fall of the movement took place in tandem with the transformation of the socio-economic equilibria of the "glorious" thirty post-war years and the emergence of a new phase of globalisation. The author aptly cites PCI's Pietro Ingrao's 1984 remark that "the Left could acquire the ability to manage the nation state, just at the moment that the latter's tools are being rendered useless by the new global order" (184). Another crucial aspect the book highlights is Europeanisation. Although enthusiasm for European integration ebbed and flowed throughout time and involved the four parties unevenly, the Eurocommunist parties mostly ended up interpreting "the pro-European sentiment in their societies but also utilized their political weight to fashion the citizens' idea of Europe" (211), thus becoming agents of Europeanisation "from below".

The interest of this book lies in its comprehensive comparative analysis of the Eurocommunist phenomenon - a subject which, after the flood of real-time analyses of the 1970s and 1980s, has generally been studied from the perspective of a single party (most often the Italian PCI). A second distinctive element is the reflection the author develops in the conclusion, which sees the "Eurocommunist moment" as "the historic connector that links the past with the present of the European Left" (231), thereby providing a framework for the analysis of left-wing forces such as Syriza, La France Insoumise or Podemos that goes beyond the current fixation with the category of populism. At the same time, however, this study appears to suffer from some shortcomings.

In the introduction, the author announces that his method entails "the intersection of political science with history" (3). Throughout the book, however, he fails to make use of the more up-to-date historiographical literature. In the last two decades, historians have taken advantage of the declassification of archival documents to produce several important studies that situate the emergence of Eurocommunism in the context of the transformation of the Cold War order and of international communism. Yet these works are practically absent from the book: it is particularly striking, to mention just a major case, that the bibliography does not cite any study by Silvio Pons, possibly the most renowned expert in this field. Instead, the book tends to rely heavily both on coeval political science and on party documents and party press. The latter are used not only as sources about the position of the communist parties themselves, but also as references to reconstruct the broader political and international context, with the inevitable effect of producing a sometimes distorted image (see, for instance, the book's very static depiction of the Cold War context, or its discussion of the relations between Eurocommunist and social democratic parties). 1970s-1980s political science conversely informs the author's analysis of the international communist movement, as well as many of his categories and research questions. To this reader, this approach appears quite dated: questions such as the sincerity of the democratic commitment of reformed communist parties are far less relevant now that international communism does not exist anymore. Equally dated is the rather binary approach to the question of the relations with Moscow - the autonomy vs. subordination alternative has been abandoned by most historians, who prefer to recur to more nuanced conceptualisations (the recent, three-volume Cambridge History of Communism, to take just one prominent example, proposes a flexible paradigm which appears better suited to grasp the interactions between the history of communism and the global history of the 20th century).

Finally, one has to regret a number of factual errors and a less than thorough editing. The PCI was not "the majority party" (67) in Italy in 1978; the crucial Épinay congress of the French Socialist Party took place in 1971, not 1972 (69); the "Berlinguer-Craxi conflict" did not take place in 1970, as the author claims (167), but much later - Craxi only became secretary of the Italian Socialist Party in 1976 and Francesco De Martino is wrongly characterised as his "number 2" (he was in fact the party secretary). What agitated Italian communists in the 1980s was the European Monetary System, not the "European Stability Mechanism" (198), which only entered into force in 2012; the name of the Italian public electric company is ENEL, not "ENTE" (188). Names are frequently misspelt: François Mitterrand is spelt as "Mitterand" throughout the book, Italian communist Giulio Cerreti as "Ceretti", Olof Palme as "Oulof", Spain's prime minister Adolfo Suárez as "Soares", Reinhart Koselleck as "Kosseleck".

In spite of these shortcomings, this book will be certainly useful for students of communism and European politics in that it provides a complete picture of a crucial moment in the history of the European Left.