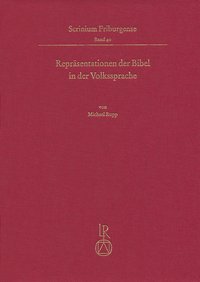 The long primacy of the abbot Vinzenz (1411-42) at the Cistercian convent of Altzelle, which lies about 30km west of Dresden, marks a period of active scholarly engagement and thriving intellectual culture in the history of the abbey. This was in part stimulated by the presence at Altzelle of Cistercian theologians who had fled the university of Prague in the wake of the Hussite controversies: most notably, but not exclusively, Vinzenz Gruner (in Altzelle from c.1414/15; d. before 1421) and Matthäus von Königsaal (in Altzelle from 1411; d. 1427). It is also apparent in certain pieces of evidence that indicate some kind of attempt to provide an education for the lay brethren (the conversi), and in an encounter with the German language that can be detected in a small number of manuscripts from the Altzelle library.

These manuscripts with German-language content are the subject of Michael Rupp's study. They are an inhomogeneous bunch. Few, if any, were demonstrably copied in Altzelle and some were certainly not. They are not the extant remnant of a lay brothers' library, for the Cistercians restricted the access of their conversi to the instruments of learning tightly. This raises the question as to what function vernacular manuscripts might have held in the Altzelle library. It is this perspective that informs Rupp's inquiry and allows for the treatment of disparate material in a coherent manner. The individual items are not treated in isolation, but placed alongside similar manuscripts and works from across the German-speaking lands. This allows for comparative analysis, but also means that certain chapters represent important studies of several literary phenomena in their own right.

This is true in particular of psalm translation, the subject of the first extended section of the book. Rupp explores a whole set of German-language psalters from the fourteenth and earlier fifteenth centuries. An Altzelle manuscript in which each verse of the entire psalter is given first in Latin and then in German (Leipzig, Universitätsbibliothek, Ms 22) forms the starting-point. Whether the context in which a manuscript of this kind would have been used was language acquisition or private devotion, Rupp argues that in this and in all other instances the German text always leads the reader back to the Latin context of the liturgy. The German text does not, in other words, become autonomous from that framework. This in turn suggests usage by ordained Cistercians in the exercise of their pastoral duties to provide theological instruction and/or basic Latin tuition. The same applies to the Altzelle liber usuum (St. Marienstern, Oct. 123), which unusually contains a set of instructions in German to guide the recitation of prayers. These might well be understood best as tools for Cistercian priests to deploy in their communication of latinate theological content to external audiences (perhaps Cistercian nuns or conversi in the first instance).

Sermons receive similar treatment. Rupp's study of the postil of Hartwig (or Heinrich?) von Erfurt and of a related text, the so-called 'plenarium formerly attributed to Friedrich the Carmelite', is, in truth, a fine introduction to the German sermon and to the whole phenomenon of vernacular plenaria. Individual sermons are taken as case-studies to describe how they were structured in their various configurations and how they operated as communicative entities. The same approach is then taken to a German sermon cycle which combines the 'Schwarzwälder Predigten' with texts adapted from the Latin sermons of Peregrinus von Oppeln (Leipzig, Universitätsbibliothek, Ms 687).

Rupp explains the presence of these vernacular sermon manuscripts in the thoroughly latinate environment of the Altzelle library in terms of their offering preachers not concrete models, but a repertoire of literary strategies in the vernacular by which theological content could be communicated to a lay audience. The different sermon cycles did, to some extent, open multiple perspectives on key theological issues. Yet the multiplicity of available texts did not serve to expand the range of potential interpretations so much as the range of literary devices with which theological interpretations might be expressed. It is only the 'Schwarzwälder Predigten' that stand at one remove from this picture. Rupp regards them as an early example of the genre of sermons intended for private reading.

It is this argument concerning just how German sermon cycles served preachers as a resource in the library of Altzelle, otherwise entirely constituted by Latin works, that is the most significant intellectual contribution of this study. Just as collections of model sermons in Latin offered preachers options and ideas to be worked up in oral delivery, and not texts that were simply to be delivered in a straightforward manner, so too the exact function of German sermon cycles, especially in such a firmly latinate environment, should be considered with greater flexibility. Here Rupp's work leads the way.

A single German work in the Altzelle library alone shows autonomy from a latinate framework. This is the Gospel translation made for a clusenere (hermit?) in Halle an der Saale named Matthias von Beheim in 1343. Nothing more is known of him than this information, which is found in the dedication to the sole manuscript (Leipzig, Universitätsbibliothek, Ms 34). It contains a translation into German not just of the Gospels themselves, but also of the relevant pseudo-Jeromian prologues, canon tables, conspectuses of the liturgical pericopes, and a calendar. This comprehensive provision of material, omitted from other later medieval Gospel translations, represents an ambitious attempt to equip a Germanophone reader with all the literary tools and paratextual apparatus that a Latin-literate cleric would normally have at his disposal. It did not originate in Altzelle. In its monoglot exclusivity it is the exception that proves the rule that the German texts from Altzelle were otherwise all, at least in some way, keyed in to a Latin theological framework.

Rupp argues in conclusion that the monks of Altzelle engaged more intensively in the course of the fifteenth century in the provision of pastoral care to the laity. This may, although it is entirely speculative, have been undertaken in response to the potential threat from the spread of Hussite doctrine. There is indeed evidence of a certain fear of Hussite missionizing in the German borderlands around Bohemia. That said, as Rupp is careful to note, none of the German texts from the Altzelle library was in any way 'anti-Hussite'. They continued to be used into the later fifteenth century and beyond. Some did not even enter the library until the early sixteenth century. This was long after the theological danger from Hussite Bohemia had abated.

The second half of the volume consists of a full set of manuscript descriptions and very careful transcriptions of key texts. These will serve as a useful foundation for further study. It is worth noting, however, that Rupp approaches these manuscripts and texts almost exclusively from the perspective of their potential function. Questions of the literary dimensions of the texts - a comparative assessment of the methods of translation used, for example, or discussions of literary style or of the handling of technical vocabulary - are almost entirely absent. This makes for an interesting but ultimately limited study.