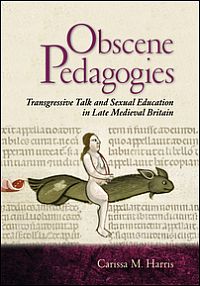 Many scholars have made serious attempts to come to terms with such notions as 'obscenity' and 'pornography', both in modern and historical contexts. However, there is no clear consensus regarding the full meaning of either term, and especially how we could apply them and under what cultural circumstances, Yet, together with Carissa M. Harris, Assistant Professor of English at Temple University in Philadelphia, PA, we can certainly agree that in both cases there is a sense of transgression, scandalization, offense, and perhaps also violence. The vast body of Old French fabliaux, Middle English tales, or Middle High German mæren is filled with obscene and pornographic references, allusions, themes, and motifs, and the situation might even be 'worse' in late medieval Shrovetide plays.

But for her study, Harris focuses on late medieval British literature, curiously associating obscenity with pedagogy, which would imply that obscenity was used specifically for educational purposes. If we think, for instance, of the Carmina Burana, we could find some interesting evidence for such a thesis, though they are not mentioned here. In some respect, even the poets of the fabliaux intended to instruct their audiences in how to handle their lives more intelligently and to laugh about foolish individuals. But the present book pursues a very different perspective and means 'pedagogy' in the sense of establishing a group agreement for men in their sexually exploitive attitude toward women.

Harris is deeply concerned with sexual violence against women, and she energetically discusses the contemporary problem that has affected herself and many of her female contemporaries. More than maybe ever before, this medievalist uses medieval literary examples to reflect upon current issues, deliberately blurring the historical dividing line and identifying these cases of 'male toxicity', as it is called nowadays in current gender discourse, as illustrative of the way how many men instruct their peers how to manipulate women and to abuse them sexually (3). Literary obscenity served, both then and today, to "authoriz[e] masculine aggression and foster [...] misogyny" (3). More specifically, Harris resorts to black feminist theory in order to understand the literary phenomena under investigation in this book because she wants to combat "race-based sexual violence" (5) and to draw from the medieval cases in order to address her own personal experiences (7). It remains entirely unclear what she means with 'race' in her context. However, as she insists, male violence has deep roots which need to be brought to light in the modern battle against men's sexual abuse of women (9).

We can certainly sympathize with her political agenda, whether this really pertains to the analysis of medieval narratives/poems or not. Unfortunately, the approach pursued here, combining critical scholarship with political issues today, seems to be a rather problematic one, but it provides Harris with the essential drive to pursue her topic from a literary-historical perspective because she regards the many examples in pornographic poems from the fifteenth and sixteenth centuries (one from ca. 1300) as specific poetic instructions by men to other men how to interact sexually with women. In the last chapter, however, she suddenly argues from the opposite point of view and reads sexually explicit poems as literary media for women to pursue their own desires, although those texts were written by men.

However, there are considerable problems with a statement that universalizes obscenity as a fundamental teaching tool for boys: "Obscene material occupied a prominent place in pedagogical texts used by medieval schoolboys" (23). Considering the large corpus of medieval school books (see, e.g., the work by Walter of Bibbesworth [1235-1270]), such a claim would have to be supported with specific evidence, which is, however, not forthcoming, unless we accept the notion that the presentation of entertaining erotic (obscene?) songs at court, for instance, served educational purposes. Chaucer composing his "The Wife of Bath's Tale," expressed rather strongly his opposition to rape, and we know at any rate how harshly rape was treated by the medieval courts.

The first chapter sets in with a detailed summary of a horrible rape case in Ireland in 2011, which becomes the foil for Harris's discussion of Chaucer's "The Reeve's Tale," where there might be double rape, but the narrative framework is rather complex and cannot be easily resolved in legal terms. Harris does not blink an eye, however, and goes straight toward the direct charge of rape, irrespective of the many scholarly discussions. Instead, she takes this and other Chaucer tales as specific examples of the "widespread pedagogical currency to teach [men] their brand of masculinity" (62), and thus uses an extremely blunt interpretive instrument for her political concerns today. To be sure, the author demonstrates a fine command of Middle English in its heavy use of sexual terms, though the subsequent analysis then often seems rather ideology-driven. Why would the miller's daughter reveal to the student where the baked bread is hiding, if she felt raped? We can agree with Harris that the "Reeve's Tale" illustrates how wit and cunning can help win a case against a brutal and mean-spirited man, such as the miller. That, however, has nothing to do with obscene pedagogy (47), and even less with a strategy by medieval men "teaching their peers the tenets of rape culture" (63).

Chapter two deals with Middle Scots flyting poetry, where Harris recognizes a deep streak of misogyny and sexual abuse as well, and this also when she discusses Middle English pastourelles in chapter three, a genre that has been reviewed already rather controversially in other contexts. She recognizes here that a good number of examples have maids speak up, either resolutely rejecting the wooer, or pursuing sexual joys themselves, which makes the entire charge of obscenity rather problematic once again, not to speak of the concept of obscene pedagogy, which I would dismiss altogether as a much too crude and misleading concept in this framework. But Harris explicitly examines these poems not objectively, but from her personal perspective, perceiving herself in the role of the 'victimized maids' and feeling "anger, anxiety, an infuriating sense of powerlessness, and a fear" (148).

Much research has already been carried out focused on so-called "women's songs," which Harris discovers in English poetry as well (chapter four). Again, as throughout the whole book, the author is entirely focused on the English situation and completely ignores the relevant research addressing parallel cases in French, German, or Italian literature. [1] Nevertheless, we can be very grateful to Harris for bringing these English poems to our attention and making those that are discussed in the last two chapters available in the appendix. However, many of the voices of singlewomen seem to contradict considerably the central thesis of this book, but here we often find ourselves in very different social and economic contexts, which problematizes the entire approach even further. I would particularly object to the use of the term 'pedagogy' and would rather argue that the poetic voices (male and female) contribute to a discourse that was determined by much playfulness, evocation, experimentation, and allusions and can hardly be simply (if at all) correlated with male sexual violence today.

Harris finally reflects upon her own personal response to the poem "Be pes ye make me spille my ale," which moved her to tears when she copied it from the manuscript out of sympathy for the rape victim, although she herself admits that this was clearly a poem composed and written by a male scribe (186). Without any shred of evidence, she simply claims that many of these songs were probably performed by female singers who thus utilized them for public criticism of male sexual abuse (156-57). I am afraid that basic principles of literary analysis have been ignored here since the author reads everything literally or manipulates the textual statements to fit her own ideological interests, and thus she misunderstands badly the literary discourse in which she perceives nothing but female victims and male braggadocio. Yes, rape is clearly addressed in some of the poems, but why, in what context, for what purpose, and in what way (see my study, Sexual Violence and Rape in the Middle Ages: A Critical Discourse in Premodern German and European Literature, 2011; here not consulted)? Finally, Harris connects the problems unearthed in her analysis with the current political crisis created by President Trump, and from a feminist perspective this criticism can only be supported. But all this transgresses the necessary separation between literary-historical analysis and modern politics and intentionally injects a strong sense of subjectivity into this study.

On the one hand, the author at times certainly operates on a sophisticated and scholarly level, but then she constantly leaves that behind and enters an ideological, political argument in which these late medieval English poems are simply instrumentalized but not analyzed sufficiently within their own terms and context. She wants (!) to perceive between the lines "resistance to patriarchal power" (158), even though the verses are clearly identified as having been composed by a man. Harris explicitly ignores the textual testimony and announces that a song from ca. 1300 vocalizes "maidens' agency" (168). Why? Simply because the modern author herself went through a horribly repressive school system in her youth when her teachers basically demonized sexuality, while she and her fellow students learned the secrets from each other (183-85). How could Cornell University Press have allowed all this to pass into print?

This provocative and rather baffling book concludes with a bibliography and an index. Granted, it opens our eyes toward a significant body of English pastourelles and singlewomen's poetry, but it reads them in a surprisingly political fashion that is suffused with emotions and agitation that dangerously lead to rather subjective perspectives and egregious misreadings. Harris does not offer careful studies of the song collections, keeps us blind about the relevant context, and forces her interpretations to such an extent that they lose their critical credibility. Curiously, there are three glowing endorsements on the back cover, but I wonder whether those authors have actually read the book manuscript or understand anything about the arguments raised here. Until now, I have had high respect for Cornell University Press, but this is no longer quite the case.